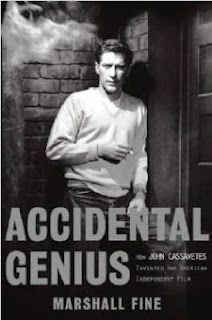 I'm a lot more familiar with John Cassavetes the film legend than I am with his actual work, but having read Marshall Fine's 2006 book Accidental Genius - which strikes a nice balance between straight biography and an assessment of the filmmaker's work - I think I'm going to have to make a better effort to catch up with the films I haven't seen yet. A thorough behind-the-scenes accounting of Cassavetes' work both in front of and behind the camera (in addition to providing the same treatment for some of his stage work) and a just the facts accounting of his life (the book had Gena Rowlands' blessing but not her participation), Accidental Genius is a fascinating look at one of the most important American filmmakers of all time, a man who made a point of doing it his own way, even when doing so apparently meant getting in his own way.

From the perspective of 2014, when the line between "independent" and "studio" films is so blurred that a picture as mainstream as Silver Linings Playbook can claim the Independent Spirit Award for Best Film, it can be difficult to fathom how completely on his own Cassavetes was when he made most of his films, mortgaging his and Rowlands' home to make up budget shortfalls, distributing A Woman Under the Influence on his own (and doing an effective enough job at it that both he and Rowlands received Oscar nominations), and giving plenty of people the opportunity to break into the business both in front of and behind the camera (whether they wanted to or not) by adopting the "lets put on a show" attitude that you usually only see in films. Cassavetes didn't usually have a safety net and in making his films guerilla style, grabbing people he knew and putting them in front of the camera or giving them jobs behind the camera, he basically invented his own way of filmmaking. That charge forth and don't stop to worry about it attitude served him well insofar as he managed to get his films made, sometimes with Herculean effort and facing obstacles that many people wouldn't even try to surmount, but also presented certain problems that wouldn't have come up if he had slowed down slightly. For example, Accidental Genius details how when making his debut Shadows Cassavetes ended up spending an inordinate amount of time editing the film because, though he had made films before as an actor, he didn't understand what the role of the script supervisor was. As a result there was no one on the set to keep track of which takes he liked so he ended up having to print every take that was shot, which amounted to 250,000,000 feet of film that had to be watched and sorted through (much of it ultimately unusable because of sound issues), and spend two years trying to put together a coherent and workable film from it. The sections dealing with the making of Shadows are as a result the most fascinating in the book, detailing how narrowly Cassavetes managed to avoid disaster, how he found his voice as a filmmaker as he went along, and in particular how he ended up with two different movies.

The story of the two Shadows is too long for me to recount (besides, the book does such an excellent job of it that anyone interested should just read that), but in short: Cassavetes began showing the first completed version of Shadows in 1957, a film which inspired mostly walk outs but also gained some very enthusiastic champions, chief among them Jonas Mekas, a critic and founder of Film Culture magazine who gave the film plenty of attention and even invented an award just so he could give it to Cassavetes for Shadows. But while Mekas saw the film as a masterpiece, Cassavetes still considered it a work in progress and when he screened a new version in 1959 (the "official" version) "Mekas leapt back into print - now condemning the new Shadows as a sell-out, a fraud, a travesty of the film he had championed a year earlier." So great was the betrayal that Mekas felt that it seemed to color his view of Cassavetes' subsequent work, as if he decided that he would never again be "taken in" by the filmmaker. To make things even weirder, the original, work in progress cut was lost and eventually found by film scholar Ray Carney, who subsequently began screening it at festivals without permission and ended up in a lawsuit with Rowlands. As of the writing of Fine's book, Carney still had the print and was refusing to surrender it, which is apparently something that Carney makes a habit of as in 2012 he was also involved in a legal battle with filmmaker Mark Rappaport over digital masters of Rappaport's movies that are in Carney's possession.

The making of sections of the book are totally engrossing and Fine manages to turn them into an appreciation of Cassavetes as a filmmaker without glossing over his flaws (though his style of filmmaking was geared towards giving actors freedom, it was obviously very hard on actors as well, as Peter Falk's struggles on Husbands demonstrates in addition to the fact that Cassavetes is noted as having resorted to slapping actors in order to elicit the emotional reaction he desired for a scene). As a companion piece to Cassavetes' films, Accidental Genius is a good place to start because, though it doesn't offer much in terms of critical analysis of the films, it does discuss at length how each film came to be and often how each film changed during the course of being made. The only part of the book that really gave me pause were a couple of sections detailing the critical reactions to Cassavetes' work in which Fine takes the opportunity to take a few whacks at Pauline Kael, describing her as "the shrewish grand dame of movie critics, who rarely met a filmmaker whose work she didn't feel she could improve." Like Kael or not, she remains one of the most influential and important American film critics of all time, so dismissing her by calling her "shrewish" demonstrates a woeful lack of objectivity about the role of critics, in addition to possessing the faint whiff of misogyny. Plenty of critics didn't like Cassavetes, but Fine gets bizarrely personal when discussing Kael while her male counterparts simply have their opinions presented without attack on their character or personality. I mean, if you can resist the urge to call Red Reed "shrewish" some six paragraphs earlier, you've got no excuse for lobbing the descriptor at Kael. Aside from that, though, I wholly enjoyed Accidental Genius, a book which is as informative as it is entertaining.
Posted by Norma Desmond at 8:00 AM

I love the Cassavetes/Rowlands film GLORIA.