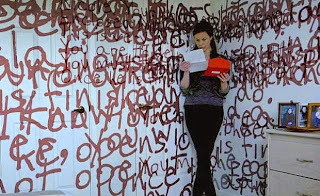 A woman receives a letter. It reveals that someone has been watching her, secretly assessing her for a special task. As the letter writer has determined, she's dissatisfied with her life both at home, where she is ignored and unappreciated by her husband and children, and at work, where she finds herself at odds with a mircomanaging superior determined to find fault with everything she does, and ready for a change - even if it means following the increasingly convoluted instructions of an anonymous correspondent. Sean Garrity's Blood Pressure has a premise that could send its story in a few different directions and ends up falling somewhere between thriller and romance, and for much of its running time it spins an intriguing yarn that becomes increasingly engrossing - at least right up until the story hits its final act and goes hard off the rails.

The film opens with the receipt of the first letter addressed to Nicole (Michelle Giroux), a Toronto pharmacist who is married to Mike (Judah Katz), with whom she has two teenage children, Josh (Jake Epstein) and Kat (Tatiana Maslany). The anonymous letter writer reveals that he has been watching Nicole for some time in order to determine whether or not she might be up to a special task he wishes to assign her, and that in the process of observing her, he has taken note of how unhappy she seems. As a result, his mission is not only to convince her to take on the task he has in mind, but also to push her to try things aimed at helping pull her life out of the rut it has fallen into. Contained in the envelope with the letter is a green card and, if she decides that she wants to participate, she must place the green card in her window, at which point he will give her another letter. Without much hesitation, Nicole places the card in her window and then begins a prolonged, one-sided correspondence with the mystery man, telling no one except for her about-to-retire co-worker, who warns her to be careful as she has no idea who this man is, or what he really wants.

At first the letters are centered on bringing some benefit to Nicole, arranging for her to get her hair done, arranging a surprise for her birthday, arranging for her to spend some time at a shooting range learning how to fire a gun; and then the requests begin to get a bit more unusual. She's sent to a cafe to observe a man who will be there and take notes. Later, she's supposed to follow the same man and eavesdrop on a cell phone conversation he's going to be having, and later still she's asked to use a key provided by the letter writer to enter the man's house and observe him while he's sleeping. Nicole eventually realizes that Darryl (Jonas Chernick), the man she keeps being asked to watch, and the letter writer are one and the same and finally confronts him to ask what he's after. By this point she has undermined her relationships with the members of her family, skipping a couple's therapy session arranged by Mike in order to perform one of Darryl's requests, leaving Kat stranded without a ride to perform another, and just generally confusing her family with her increasingly secretive and seemingly out of character behavior. If Darryl were looking to begin an affair, it seems like Nicole may be in a place where she would be open to it, but Darryl's goal is ultimately different, darker, and far more out of left field.

For much of its running time, Blood Pressure is a fairly absorbing movie which keeps you guessing about where it's going to end up. On the face of it, it may seem unbelievable that any woman would respond positively to an anonymous letter which reveals that someone has, essentially, been stalking her; most women are more likely to respond the way that Nicole's co-worker does, by assuming the guy is a creep, at best, and dangerous at worst. For Nicole, though, the situation has to be viewed through the lens of how disregarded she feels at home and at work. Her husband is always working, even missing her birthday (which in turn allows Darryl to make a gesture which, were his intentions ultimately different, would seem romantic), and when Mike is around, he's undercutting her attempts to exercise parental authority over Josh and Kat. She feels as if she doesn't matter at home and when she's at work she's constantly being berated by her supervisor, who treats her as if she's an idiot. The letter writer has been paying attention to her, has taken the time to get to know her, albeit from a distance, and hooks her interest by expressing a sustained interest in her. That changes as they move forward and he begins putting her in situations where she's supposed to pay attention to him, but by that point she's invested and she gets there as a result of Darryl having made her the center of his attention when everyone else around her has been brushing her off and forcing her off to the side. Because it makes such solid efforts to characterize Nicole and her life, both exterior and interior, Blood Pressure more than succeeds in its first obstacle, which is selling the premise.

Where Blood Pressure ultimately stumbles is in its finale. Once Darryl's motivations are revealed - and then revealed to be a cover for a slightly more elaborate plan - the film becomes just a bit too convoluted. I won't spoil the two revelations that come one atop the other once Nicole and Darryl finally begin speaking face-to-face; I'll just say that had the film left it at the first revelation and followed it through, it might have stuck the landing, but the second revelation (a twist which seems to exist solely for the sake of having a twist) just upends things too much and relies on an insane and kind of hacky coincidence which results in an ending which makes neither logical nor emotional sense. Giroux almost manages to save it with her performance, which is strong and invested enough that even Nicole's riskier moves at least seem rooted in something that feels explainable, but ultimately the ending just doesn't work. Still, the first two thirds of the film are good enough that I would offer a marginal recommendation.
Posted by Norma Desmond at 8:00 AM