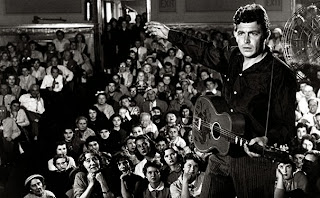 Sometimes films need to be seen from a distance in order to be properly appreciated. Though it seems to be accepted as a masterpiece now (as it should be; it's one of Elia Kazan's best films and Elia Kazan was no stranger to greatness), A Face in the Crowd was tepidly received on its initial release in 1957. How that could be, how critics could dismiss this film as anything less than a major work, seems like a mystery now, but maybe it was just too far ahead of its time, too caustic, too hard edged. Watching it I was reminded very much of Network, a somewhat similarly themed film but one which had the good fortune to be released at exactly the right time to be seen for what it is: a work of absolute brilliance. A Face in the Crowd is like a precursor to that film, both stories in which a nation becomes captivated by men with a certain amount of madness and then watch as he's destroyed by the very medium that made him.

"A Face in the Crowd" is the name of a radio show which makes an unlikely star of "Lonesome" Rhodes (Andy Griffith), a drifter found in an Arkansas drunk tank by Marcia Jeffries (Patricia Neal), who believes that his down-home charm will connect with audiences. His man of the people persona does, in fact, connect (and quickly at that) and soon he's able to transition from the radio to television, from Memphis to New York. Along the way he becomes romantically involved with Marcia and gains a manager in the form of the slick and ambitious Joey DePalma (Anthony Franciosa), in addition to gaining a level of power which allows his ego to balloon. In no time at all, he goes from a just folks everyman to a veritable emperor living high above the rabble in a luxury penthouse, a member of his entourage on hand to work the applause machine so that his every thought is accompanied by cheers and applause.

As his notoriety grows, the darker aspects of his personality take over. While viewers continue to love him, and his influence becomes so great that he's seen as a political asset to those in power, the affection that those around him once had for him begins to curdle. Marcia, in particular, is taken for a rough ride by Lonesome, with whom she falls in love only to have a woman show up in New York proclaiming to be his wife, and then is later humiliated when she arrives at the airport to reunite with Lonesome after he's secured his divorce, only for him to disembark from the plane with his new, and very young, wife (Lee Remick). Yet Marcia keeps hanging in, embittered but determined, while Lonesome's former staff writer Mel (Walter Matthau) gets ready to publish a book which exposes the real Lonesome. But in the end it's Marcia who pulls back the curtain, sending Lonesome down in flames by letting the audience see the real man behind the image.

Written by Budd Schulberg, who adapted the screenplay from his own short story, A Face in the Crowd is a relentlessly dark piece of work, one which allows its male lead to grow more and more despicable as the film goes on, while allowing its female lead to become more and more beaten down. If there's triumph in the end, it's a hollow one; Lonesome may be broken and howling on his balcony, but even his harshest critic has to concede that while Lonesome will be down for a while, he isn't necessarily out, and everyone around him ends up as broken as he is. The Marcia at film's end is unrecognizable from the Marcia at the beginning of the film and she barely survives her own act of vengeance, she's still so caught up in the idea of Lonesome Rhodes. If the film has a "hero," it's Mel, but he's not the typical Hollywood hero insofar as he doesn't actually do anything. He speaks to the film's disdain for the corruptible power that the medium of television can give to someone like Lonesome, and he gets to deliver the film's big final speech in which he lays out the road that's ahead for Lonesome now that he's been exposed, but he's ultimately a passive character. He's the story's Greek chorus and it's to Matthau's credit that despite the limitations that that role puts on the character, he makes it memorable. It's even more impressive when you consider that he had to make the performance memorable while standing alongside the thunderous performance given by Griffith.

Given the two roles for which Griffith is now most famous (Andy Taylor and Ben Matlock), the actor's performance here is startling, and all the more so because within the span of a few minutes you forget about those two other roles completely. He is so totally and completely Lonesome Rhodes - sexually charged, charismatic, manipulative and loathsome - that it is positively electrifying to watch him on screen. Yet, for all that, in the end it is Neal as the broken and disillusioned Marcia who walks away with ownership of the film. Neal, who to my knowledge never gave a bad performance and who despite winning an Oscar (for Hud) is one of the most underrated actresses of her era, provides the film with the beating heart which elevates its story to the level of tragedy through her vulnerable and intense performance. Standing in for faceless crowd that falls in love with Lonesome and is left brokenhearted and humiliated when he reveals his true nature, she's punished on the behalf of the entire audience that elevates him to stardom. As the film progresses Neal carries herself as if each new disappointment is an anchor that's been fitted around her, dragging her further and further down, and even though she "wins" in the end, she does not carry herself as the victor. In a tale as dark and uncompromising as this one there are not victors, only people who lose to different degrees. That description might make A Face in the Crowd sound unbearably depressing, but it's actually not. It's a great and invigorating piece of work.
Posted by Norma Desmond at 8:00 AM