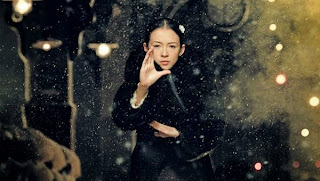 As a visual work, Wong Kar-wai's action biopic The Grandmaster is nothing short of spectacular. Photographed by Philippe Le Sourd (Oscar nominated for his work here) the film is crisply, gorgeously rendered, capturing the sumptuousness of the more ornate sets and the brutal precision of the action sequences in equal measure. As a visual piece, it works splendidly. As a story it finds less success, following its characters over the course of twenty or so years and during a period of intense social and political flux and change, but never really finding its center. It's saved by strong performances and perfectly executed action pieces, but remains a film with a measurable disparity between its ambition and its execution.

Leung stars as Ip Man, a grandmaster in the kung fu style of Wing Chun who would go on to teach Bruce Lee. Playing a bit fast and loose with chronology, The Grandmaster jumps around in time, touching on Ip's initiation into martial arts and training, his marriage, and his appointment as the representative of the southern China masters when Gong Yutian (Qingxiang Wang), a northern master, offers up a challenge. After first being tested by three southern masters, Ip enters the arena with Gong, who decides that their fight will be philosophical rather than physical. Ip is declared the winner but is challenged again, this time by Gong's daughter Gong Er (Ziyi Zhang) who wants to regain the family's honor. The relationship between the two will become the closest thing The Grandmaster has to a central thread, one gaining in import as the years and then decades pass, though it remains platonic.

Ip's relatively comfortable life starts to crash during the Second Sino-Japanese War, resulting in two of his daughters dying of starvation and the family's descent into poverty. In attempt to get back on his feet Ip moves to Hong Kong, finding work, building his reputation as a martial artist, and eventually reconnecting with Gong Er. Since their last meeting, her father has died and his legacy has been taken over by Ma San (Zhang Jin), once the grandmaster's disciple, but now a collaborator for the Japanese. Gong Er pursues a path of vengeance against the usurper, vowing to never marry, have children, or teach in exchange for the opportunity to take back what Ma San has stolen. She makes good on the vow, becoming a doctor rather than a martial arts teacher (which means that her father's teachings will die with her rather than being passed on), but also becoming addicted to opium. When they meet again decades after their initial combat, the scene is tinged with sadness and regret, as what could have been finally fades away forever.

Like many films whose story span such a great period of time, The Grandmaster tends to fall into the trap of stringing together a series of "Very Important Events" and hoping that volume can substitute for a lack of narrative cohesion or emotional urgency (in the interest of fairness, I should state that the version of the film I saw was the Weinstein Company cut; these issues may not exist in the longer, original cut). When the film rises above this tendency, it works marvelously, though it also reveals a secondary problem: the most fascinating character in the film is not its protagonist. Though Leung is a gifted performer, and perhaps never more so than when he teams up with Wong, his perpetually calm character can at times seem oddly passionless (an exception is when the film shows his grief over losing his children), especially in comparison to the more emotive performance of Zhang. Gong Er has a personal narrative better tailored to cinematic treatment, giving her character a cleaner and more compelling arc, one which takes her from a fiery young woman to a middle aged woman in the midst of a slow descent into sorrow by way of a revenge tale. Scenes in which Zhang appears take on an electricity that is sorely lacking in many scenes in which she does not appear, which only underscores how ill-served Leung as an actor and Ip Man as a character are here.

All that said, the main draw in a film like The Grandmaster is the action sequences and in that respect the film can't be said to disappoint. From the opening scene, which involves a long outdoor fight in the rain, to the train station showdown between Gong Er and Ma San, and every battle in between, The Grandmaster is a study in how to do action right. Though the action moves fast, it flows in a way that makes sense and, crucially, allows you to see where the players are in relation to each other, and which of them is throwing the punch or kick, rather than simply inundating you with a series of fast cuts and disembodied parts as so many action films do. To top it off, not only does the action unfold in a way that can be understood, but it's exquisitely photographed. Though I thought the film fell short in certain respects, there's no denying that it looks like a work of art.
Posted by Norma Desmond at 8:00 AM

The Chinese cut of the film is way better than the Weinstein cut which is an abomination.

The Chinese cut contains far less expositions while it plays around more with the narrative and takes more time to invest and develop the characters.

i think the film is far more than its great cinematography and action sequences. the love story and zhang's performance are both inspired. so well done.

@the void99: that doesn't surprise me about the differences between the two cuts. I don't know why Harvey Weinstein always seems to feel the need to snip away at movies to the point where they're shadows of themselves.

It's because Weinstein is an idiot. He really thinks that Americans are impatient enough to be invested in foreign films. Plus, there was a contract over the running time as WKW's original cut exceeded the running time that Weinstein wanted and he had no choice but to re-cut the film which I think was detrimental to the story.