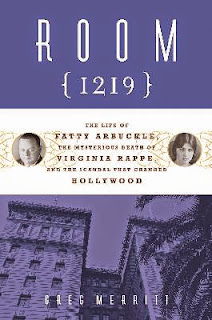 It was the original Hollywood scandal, and it had everything: booze, sex, death, and one of the biggest box office stars of the era. It took three trials and a media circus before a verdict was rendered, but the decision rendered in the court of justice didn't much matter compared to the decision in the court of public opinion, out of which a legend would grow which bears little resemblance to the actual facts in the case. Greg Merritt's Room 1219: The Life of Fatty Arbuckle, the Mysterious Death of Virginia Rappe, and the Scandal That Changed Hollywood is part biography, part true crime account, and wholly engrossing from beginning to end.

On Labor Day, 1921, movie star Roscoe "Fatty" Arbuckle threw a small party in a hotel in San Francisco during which one of the guests took ill. Four days later the woman, Virginia Rappe, a model and a bit player in a handful of films, died, and Arbuckle would be charged with manslaughter. In an accounting of the life of either Arbuckle or Rappe, the events of Labor Day, 1921 would obviously be the major point of interest, so Merritt begins there and then structures Room 1219 so that it moves back and forth between the lives of the two people leading up to that date and the date itself and its aftermath. The book, then, acts as a biography of sorts about the two central players in the case (though due to the scant amount of confirmed facts about Rappe, the book tells us far less about her than it does about Arbuckle), but its main focus is on the case, how it affected not only the life of Arbuckle going forward and the way that Hollywood did business and policed itself, and in particular how the facts of the case have become distorted over the years and decades since.

The legend of the Fatty Arbuckle case is that he killed Virginia Rappe by raping her with a Coke bottle with such force that it ruptured her bladder. Like many legends, this account bears only small traces of the truth. The known facts are that Rappe attended Arbuckle's party, that the two were briefly alone in a room together (how long they were alone is disputed), that when Arbuckle opened the door to other members of the party Rappe was fully clothed but in obvious distress, that the other women at the party undressed Rappe and got her into a cold bath, that Arbuckle told conflicting versions of what happened when he was alone with Rappe, and that Rappe had a history of having violent physical reactions after drinking. Disputed facts include a statement attributed to Rappe that "he hurt me," a statement which is ambiguous because she could have been referring to Arbuckle and what occurred when they were alone, or she could have been referring to one of the other male guests who picked her up to carry her to the bath; as well as a statement by Arbuckle in which he either said, in reference to Rappe, "Shut her up or I'll throw her out the window," or said to Maude Delmont, one of the guests and someone who would become a highly controversial figure across the three criminal trials, "Shut up or I'll throw you out the window." There was no Coke bottle, though some accounts have Arbuckle doing something untoward to Rappe with a piece of ice, and in fact Arbuckle was never charged with rape (and certainly, given the circus-like atmosphere of the trials, if there was any possibility that a Coke bottle was involved in a sexual manner, the Prosecutors, not to mention the press, would have run with it). How the story twisted in this direction is easy to understand. There isn't much in the way of physical evidence of wrongdoing on Arbuckle's part, but the whole scene (a Prohibition era drunken party in a hotel room thrown by one of the richest celebrities of the time) invited the suggestion that there was something vaguely sexual to it all, something deserving of censure on purely moral grounds, and that seems to be the basis of the Prosecution's pursuit of charges, and it was certainly the foundation in which the press rooted its coverage of the trials.

The first two trials would end with hung juries, the third and final trial would end in Arbuckle's acquittal, though you might not know that from how things turned out for him post-acquittal. Hollywood, reeling from both Arbuckle's trials and the unsolved murder of director William Desmond Taylor, and the inherent suggestion that the two events were connected by the unchecked debauchery of Hollywood, instituted the Production Code under Will Hays, and though the official ban on Arbuckle and his films was short-lived, the negative associations around him kept his films out of many theaters across the United States. Arbuckle would rebound slightly as a director under the name "William Goodrich" but, as depicted by Room 1219, he was a broken man going through the motions as a filmmaker - until, ironically, the last day of his life, when he signed a new contract with Warner Bros., only to die in his sleep after spending the night celebrating. After his death the legend of what happened in room 1219 would grow, becoming increasingly salacious as time went on, the party becoming an orgy, Rappe characterized in some versions as a random prostitute, and in others as a notorious Hollywood party girl who slept with so many members of Keystone Studios that the company had to be shut down for a period due to the spread of STDs. You can argue that Arbuckle got a raw deal in the aftermath of the trial, but Rappe is the figure who has been most savaged by the stories that have sprung up around the case.

What happened between Arbuckle and Rappe is buried so deep under conflicting stories, vicious gossip, and the procedural mess that was made of the investigation, that it can probably never be definitively untangled. For the most part Room 1219 is a work that aims to objectively separate out fact from fiction, but in the end it's pretty sympathetic to Arbuckle, and in its final analysis of the various theories about what happened Merritt does a fair bit of cherry picking in order to advance the notion of Arbuckle's innocence of any wrongdoing whatsoever. For example, he includes statements by two nurses who treated Rappe, Jean Jameson and Vera Cumberland:

According to Jameson, "Miss Rappe told me that relations with [Henry Lehrman] were responsible for the ailment from which she had been suffering... She said she had been suffering for six weeks from internal trouble. She frequently asked me, 'What could have broken inside of me?' She asked me several times to determine if she had been assaulted. She said she was unconscious" ... Said Cumberland, "The patient admitted to me that her relations with Arbuckle in the room had not been proper. She did not say whether her actions had been voluntary or involuntary.”


Merritt's analysis of those two statements is somewhat troubling, in that he's dismissive of Jameson's account while giving weight to that of Cumberland: "It is unclear what Rappe could have meant in Jameson’s account when she brought up ‘relations with her sweetheart’... she may have believed it was caused by previous sexual relations with Lehrman, or she may have wanted the nurse to think that... Cumberland’s account is more telling, as Rappe admitted she and Arbuckle had improper relations, likely meaning kissing and caressing. The fact that she did not say such relations were involuntary means they were more likely consensual.” I find this troubling for a couple of reasons, not least of which is that I don't think, based on the excerpts of the statements that he shares in the book, that either account is "more telling" than the other. For one thing, I think that Merritt is dead wrong when he states that what happened was "likely consensual" simply because Rappe didn't describe it as "involuntary." That's a specious argument at best (consent is the presence of a "yes," not the absence of a "no," and not saying whether something had been voluntary or involuntary does not automatically mean it was voluntary), and when you take into account the amount of drinking that had been going on (by the middle of the afternoon the party had gone through so much alcohol that they required a drop off of "twelve additional bottles of booze") and the fact that the amount that she had had to drink may have played a part in her death, then you have to consider whether Rappe would have been too drunk to offer meaningful consent anyway. For another thing, in Jameson's telling, Rappe asks her "several times to determine if she had been assaulted," which seems like kind of an important thing to just shrug off. Further, Merritt argues that if the ice story is true (the story being that after the other women undressed Rappe, but before putting her in the bath, Arbuckle put a piece of ice in her vagina), then it proves that Arbuckle didn't assault Rappe because if he had raped her behind closed doors, he wouldn't be so disrespectful to her body in front of other people, an argument which is so fucking stupid that I had to read it multiple times to ensure that I wasn't imagining it.

That said, while that portion of the book (which comes right at the end) bothered me, on the whole Room 1219 is a fascinating account of a crime that changed Hollywood, in addition to being a well-researched portrait of Hollywood's earliest years. Merritt renders accounts of the three trials in great detail but does so in a way that is never dry or boring, making Room 1219 a real page turner and a great choice for both true crime aficionados and movie fans alike.


Next Month: Which Lie Did I Tell? More Adventures in the Screen Trade
Posted by Norma Desmond at 8:00 AM