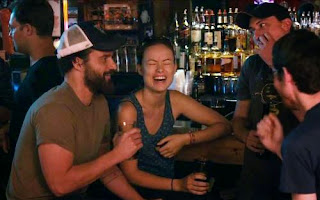 They'd probably be perfect for each other, if only they were a little less perfect for each other. As it is they're basically the same person, which means that when they get along, they get along extremely well, and when they aren't getting along, it's a disaster. Joe Swanberg's Drinking Buddies is a finely observed, if somewhat low stakes, romantic drama that hinges on the tension of possibility, and effectively uses genre conventions to pull that tension as far as it can go. When all is said and done the film doesn't entirely come together they way it should, but it has enough to recommend it to make it worth seeing.

Drinking Buddies is about Kate (Olivia Wilde) and Luke (Jake Johnson), coworkers at a craft brewery and friends whose banter edges just over the line of being platonic. Luke has long been in a relationship with Jill (Anna Kendrick), though it's become stalled by her desire to take the next step and his reluctance to do so, while Kate is in a newish relationship with Chris (Ron Livingston), with whom she has little in common. The four of them end up taking a trip together to Chris' family cabin, where events transpire that will color everything that happens afterwards. When Kate and Luke decline to join Chris and Jill on a hike, tensions between the latter pairing rise, while the already heightened tensions between the former pairing are maintained. When the weekend is over Chris will break up with Kate, and shortly thereafter Jill will decide to go away on a trip with friends, and the game of chicken that Kate and Luke have been playing all along will finally progress towards the inevitable.

Or, at least, that's what would happen in a more conventional story. In Drinking Buddies the prolonged absence of Jill, Luke's jealousy when Kate "celebrates" her break up with Chris by sleeping with someone else, and the kind of insane amount of alcohol Luke and Kate drink (seriously, guys, there's this thing called "water;" you should try it once in a while), somehow does not push the two over the line - at least, not completely. Instead, Kate and Luke seem to be trying out what it might be like to be a couple without actually getting physical, slowly inching forward but not quite making the leap. However, whatever comfort level they reach with respect to the idea of becoming a couple is shattered when a moment of crisis reveals just how incapable they are of getting along when things aren't going right. Like the incidents which occur at the cabin earlier in the film, these scenes completely change the energy between the characters, and alter the story's course.

What primarily works about Drinking Buddies is the way that it refuses to conform strictly to convention and the way that it allows the story to flow through, and be given direction by, its characters. Kate and Luke are ultimately rather passive characters and one of the main reasons why they haven't ever gotten together is that neither is willing to take action. This is as true of their relationships with others as it is of their relationship with each other; although its fairly obvious that Kate isn't really into Chris, the relationship is broken off by him, and the major moments in Luke's relationship with Jill come from Jill deciding to take action, whether it's to try to move things forward regarding their "someday, maybe" plans for marriage, or to take a breather by going away on a trip. With Kate and Luke at its center, the narrative will not be marked by romantic gestures or big speeches or even definitive declarations of feelings. Instead Drinking Buddies is a film about inaction, about two characters constantly hovering between "doing something" and "doing nothing."

Swanberg's screenplay is solid and provides Drinking Buddies with a great framework that is only made stronger by his subtle but firm direction. That said, the film undercuts its efforts somewhat by leaving so much of the heavy lifting to Wilde, a decent enough actress in big, mainstream fare, but not particularly suited to the smaller, more subtle storytelling that Swanberg is engaged in here. Her performance in Drinking Buddies is by no means bad, it just doesn't always completely work, particularly when compared to the performances of costars Johnson and Kendrick. Although the whole point of the story is things will come to naught, this still adds a layer of flatness to the film that it could have done without.
Posted by Norma Desmond at 8:00 AM