Hollywood Book Club: Infamous Players: A Tale of Movies, the Mob (and Sex) 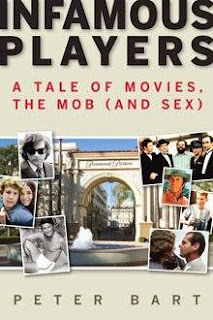 While plenty of books (a few of them great ones) have been written about Hollywood in the late 60s/early 70s, a period of radical creative freedom and risk taking, few can claim to come from a perspective as deep inside as Peter Bart's Infamous Players. As Vice President of Paramount Pictures from 1965 to 1975, Bart had a front row seat to some of the major films of the period, including the first two Godfather films, Chinatown, and Don't Look Now, and was privy to some of the goings on behind the curtain involving Charles Bluhdorn, whose company owned Paramount during the period and whose sometimes "creative" business practices seemed to keep Paramount forever on the verge of being shut down; and given that Bart was a reporter before he became a film executive, he might be expected to have written an incisive portrait of that era. Unfortunately, Infamous Players, though very readable and entertaining, doesn't really contain much in the way of depth, and prefers to offer what mostly amounts to thin sketches of anecdotes that have already been related in more detail in other books.

Despite the book's title, Infamous Players isn't really about the mob or sex outside of a few casual mentions of the former and some incredibly restrained mentions of the latter (which is kind of funny given that Bart worked at Paramount during the reign of Robert Evans, whose image is built on a foundation of cocaine and women). It is, certainly, about movies, related in the very sober tones of someone for whom film was a job rather than an all-consuming passion. The primary value of Infamous Players lies in the way that Bart can offer clear-eyed views of how some movies that already seem bad on paper can fail exactly as predicted (Paint Your Wagon) while others can somehow, courtesy of social forces that can't be harnessed or predicted, come together in such a way that they become massively successful (Love Story). His recounting of the making of those two movies was my favorite part of the book simply because of his bafflement about how anyone could be gung-ho enough about either project to throw a bunch of money at them, followed by his satisfaction that, yes, he was right that Lee Marvin plus Clint Eastwood plus musical about wife sharing was not an equation that would equal money, and his good-humored reaction to the success of Love Story, which he describes as being "as bogus as it was effective." Less funny and more heartbreaking is his description of how Harold and Maude, a project which would have been bold and risky at virtually any time, was basically abandoned by the studio on its release, making it a failure at that time but one which has since transformed into a cult success (and a film that Bart obviously still has a great deal of affection for).

Generally speaking, the details about the making of Paramount's most prominent movies during the period are pretty scant. The behind the scenes battles on The Godfather, for example, are legendary but only superficially explored here, while Bart brings up Don't Look Now just to claim that he was on set to witness the sex scene and confirm the decades long rumor that it was unsimulated. For what it's worth, at the time the book was released Donald Sutherland released a statement to the effect that the sex scene was simulated and, at any rate, Bart was not on set that day to witness it, but whether Bart's version of events is true or not, the anecdote is worth it for his description of how Warren Beatty, by then Julie Christie's ex-boyfriend, insisted on taking part in editing the scene in order to "protect" Christie. Having now read a number of books about Hollywood during this period, most of which feature long or short form portraits of Beatty as a total control freak, I find that part of the story utterly believable.

Although Bart's account of the behind the scenes machinations and power struggles at Paramount can be interesting, Infamous Players is ultimately a very breezy book and one which doesn't really stick because it's so very light. Many of the stories related here are explored better and in more depth in other books, so there's nothing particularly revelatory here. At best, Infamous Players is a fairly entertaining read that makes for a decent supplement to some of the more involved books that have been written about the period, such as the excellent Pictures at a Revolution or the fun and gossipy Easy Riders, Raging Bulls.

Next Month: Room 1219: The Life of Fatty Arbuckle, the Mysterious Death of Virginia Rappe, and the Scandal that Changed Hollywood
Posted by Norma Desmond at 8:00 AM