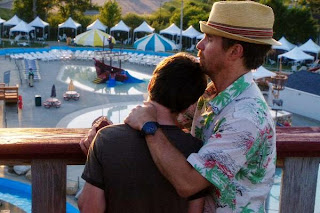 Sam Rockwell is a resource that Hollywood hasn't really used to its advantage. I can't think of any Rockwell movie I've seen which wasn't vastly improved merely by his presence and his ability to make the most out of every part he's given, no matter how small and regardless of genre. This is a blessing and a curse, however, because it means that borderline films seem to cross solidly into "good" when he's on screen, and then backslide when he's not. That's how I felt while watching The Way Way Back, a film with flaws that start to seem inconsequential whenever it drops in on Rockwell's character, but which become glaring whenever it moves on to other matters.

The Way Way Back is a coming-of-age comedy/drama centering on Duncan (Liam James), who is forced to endure a summer with mother Pam (Toni Collette), her boyfriend Trent (Steve Carell), and Trent's daughter Steph (Zoe Levin). Duncan's an awkward kid whose entire bearing expresses his desire to fade from view and be left alone, who is bullied by Trent and left at his mercy by Pam, who seemingly can't see past her own insecurities to recognize what a jerk Trent is. In an effort to get away from Pam and Trent, Duncan takes the first bike he can find and heads out, eventually ending up at Water Wizz, a water park run by Owen (Sam Rockwell) with the assistance of Caitlyn (Maya Rudolf), Roddy (Nat Faxon), and Lewis (Jim Rash). At Water Wizz, Duncan begins to find his place and become comfortable in his own skin, his friendship with Owen giving him a sense of confidence that has always eluded him and bringing him some joy in an otherwise soul crushing summer.

If this were all The Way Way Back was about, it would be a better film. Instead, it divides its time between the water park and the domestic drama unfolding at Trent's beach house, where the adults behave as if it's their Spring Break to the embarrassment of their children. Things are especially difficult for Duncan who, in addition to nursing a crush on the girl next door (AnnaSophia Robb), discovers that Trent is having an affair with the wife of a friend and then watches as Pam puts the pieces together only to choose to ignore it. Things come to a boil, compelling Duncan to stand up to Trent when it becomes apparent that his mother won't, but it seems at first that nothing is going to change. Trent will weasel his way back into Pam's good graces, Pam will ignore her better judgment, and Duncan will continue to be a simmering mixture of inarticulate awkwardness and quiet rage, only now he's one who has known what it's like to be valued by people only to be ripped away from them. All of this sets Duncan up to end the story at a lower point than he entered it, unless he can recognize his moment when it presents itself and take the opportunity to seize the day.

The Way Way Back is a fairly funny, sometimes even touching film, but one which could use some tighter storytelling and deeper characterization. Duncan is a fairly well-drawn character, a lonely kid who feels adrift and abandoned by the mother who has made her new boyfriend the center of her universe and by the father who becomes the "ideal" parent by virtue of the fact that his absence allows Duncan to project all the desired parental attributes on to him. While Trent is unlikeable entirely on his own merits, his badness is amplified by the fact that, until Duncan meets Owen, there's no other adult male in his immediate circle who can act as a counterbalance. The problem with the way the supporting characters are drawn is that, though they function in a way to help flesh out Duncan, they don't really stand on their own because they have no foundation. They exist solely in relation to Duncan, their personalities suggested by a few tossed off signifiers rather than real characterization. The girl next door, for example, is different from all the other teenage girls around because she brings a book to the beach. This is supposed to express the character's depth, but it's the shallowest form of expression because it's followed by nothing other than the fact that she finds herself drawn to an outcast like Duncan.

This wouldn't be as much of a problem if the narrative were a bit sharper and the stakes made to seem higher, but while a strong story can sometimes mask weak characterization and strong characterization can distract from a thin or messily rendered story, when the two deficiencies are standing side-by-side, they become more difficult to ignore. This is a large part of the reason why I think the parts of the story involving the water park work better than those involving Duncan's troubles at home, because the low stakes of that thread, in combination with the high energy and more buoyant tone, make the lack of narrative tidiness easier to take by making it more fun. This isn't to say that the other half of the story is without strengths, but the film puts most of its eggs in the other basket (which, you know, may have something to do with the fact that the water park half of the story is the one that features co-writers/co-directors Faxon and Rash). What works in The Way Way Back works well, but it's ultimately a very uneven film.
Posted by Norma Desmond at 8:00 AM