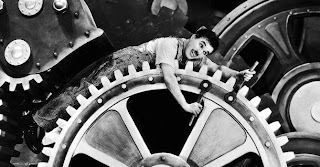 Even if you've never seen Modern Times, the image of Charlie Chaplin being worked through the giant gears of a machine is probably nevertheless familiar to you, and it's an image that effectively distills the essence of the film: the modern world is grinding the lower classes up. It's a perfectly rendered visual gag, pulled off with the grace and joy of performance that Chaplin brings to all his films. Even though Modern Times is an unmistakably political film (in tone, not affiliation) about society modernizing itself away from humanity, it's never heavy handed. Chaplin was a filmmaker who could make his point through comedy, trusting the audience not to stop thinking about the meaning behind what's happening on screen, even when what's happening is supremely silly; and even though the film is now 78 years old, it hasn't lost any of its spark.

In Modern Times Chaplin plays "A Factory Worker" who, as the film begins, is causing problems on the assembly line. The repetitive nature of the task he's performing, in combination with the dehumanizing practices of the factory's management (in one scene the boss appears, Big Brother like, on a giant screen to chastise Chaplin for taking too long in the bathroom; in another he allows an inventor to try out a "feeding machine" on Chaplin which would allow him to boost productivity by eliminating the need to stop for lunch) causes him to have a mental breakdown on the factory floor and create chaos. He loses his job and is sent to the hospital and, on his release, accidentally wanders into a Communist demonstration. When he's mistaken for being the Communist ringleader he's arrested, but is later treated like a hero by the authorities when he stops a jailbreak.

Unfolding more or less concurrently with the Worker's story is the story of "A Gamin" (Paulette Goddard), an orphan who lives on the streets and gets by on her wits after giving social services the slip. She and the Worker cross paths after she steals a loaf of bread and he (having been quite happy in jail and not keen on leaving it) tells the police that he was the thief. Both he and the Gamin end up in a paddy wagon, but escape when it crashes and run off together, dreaming of a better life for themselves. From there, the film revisits some of its earlier plot points, finding the Worker get arrested again, return to the factory where, this time, he gets someone else trapped in the machinery, and then ends up part of another demonstration. As they go from one bleak situation to another, the Gamin despairs and wonders why they should bother carrying on but the Worker channels the same spirit that, three years later, would send Scarlett O'Hara into her own bittersweet ending, saying, "Never say die. We'll get along."

Although made almost a decade after The Jazz Singer would make sound films ascendant, and originally intended to be Chaplin's first "talkie," Modern Times is made in the silent style, with title cards standing in for dialogue. It is not, strictly speaking, a silent film, however, because it does feature some spoken dialogue, all of it in service of the notion that technology has advanced to the point where it is merely dehumanizing people. The voice of the factory boss, for example, is heard every time he barks orders over the video screen, and voices are heard coming over a radio. The result of the meshing of silent and sound is an artistic triumph which allows Chaplin to maintain the romanticism and universality of the Tramp character, while pushing beyond the limits of a purely silent film. At no time does Modern Times feel constrained by its lengthy silences; rather, it unfolds in the relaxed and playful way befitting an artist completely at ease with and in control of his voice.

With its critical focus on human beings becoming either cogs in the machinery of technological progress or being shunted to the very margins of society (not to mention the scene in which Chaplin's character literally, though accidentally and unknowingly, leads a Communist demonstration), it's not terribly surprising that Modern Times would be one of the films used as "evidence" of Communist sympathies a decade later. I'm not sure how that aspect of the film was received in 1936, but watching it today it certainly seems like it's less about any kind of specific ideological association, and more of a general kind of sympathy for the disenfranchisement of the lower and working classes. For all its comedic set pieces and its lightness of touch, Modern Times is a film very much in tune with the social issues from which it was born, exploring the indignities endured by people just trying to get by during the Depression, and ending not in triumph necessarily (though simply not being broken by circumstances is a form of triumph), but in the hope that better things are just over the horizon. Politicians may not have liked it, but Modern Times really isn't a film for any one government or another; it's a film for the people, and so it endures.
Posted by Norma Desmond at 8:00 AM

A lot of movies are said to be timeless, but somehow in their immortality they fail to draw audiences. They lead a sort of half-life in film society revivals, and turn up every now and then on the late show. Myrtle Beach Real Estate