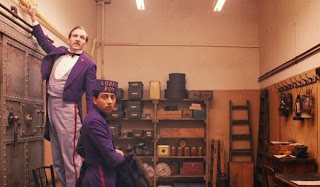 To enter a Wes Anderson film is to enter a world that resembles our own in only the most superficial of ways, a hyperreality that plays by its own rules and is at once much flatter and much livelier than our own. You know a Wes Anderson film the second you lay eyes on it, because his visual style, the mathematical precision of his particular brand of whimsy, is so distinctly his own that it can belong to no one else. The director's latest, The Grand Budapest Hotel, is at once 100% in keeping with his work leading up to it, while at the same time being a significant departure. The Anderson hallmarks are all here, but despite the film's candy colored pallet, this is a much darker and more violent film than those that came before it. It's a film that's as mournful as it is funny, the pall of loss hanging over every scene but never dragging the film down.

The Grand Budapest Hotel is constructed like a Russian nesting doll as a story within a story within a story within a story. Its outermost framing device involves an unnamed girl in the present day who is reading a memoir by The Author (Tom Wilkinson). The Author then takes over, relating a story about when he was a younger man (played by Jude Law) and met the famous Zero Moustafa (F. Murray Abraham) during the dying days of the once glorious Grand Budapest Hotel. Sensing that The Author is the perfect audience for his story, Zero invites him to dinner and tells him the tale that will encompass the bulk of the film. That story, set in 1932, finds Zero (Tony Revolori) just beginning his illustrious career at the Grand Budapest under the tutelage of M. Gustave (Ralph Fiennes), a suave charmer who oversees the hotel during its glory days before the Republic of Zubrowka is forever changed by the passage of time and the weight of circumstance. The hotel is a favorite destination of many older women due to Gustave's legendary "service," one of whom is Madame D (Tilda Swinton), whose sudden death results in Gustave coming into possession of a painting called "Boy with Apple," and earning the ire of Madame D's family, which includes her son, Dmitri (Adrien Brody), and his henchman Jopling (Willem Dafoe).

Shortly after he and Zero successfully abscond with and hide "Boy with Apple," Gustave is arrested on suspicion of having murdered Madame D and war breaks out, resulting in the Grand Budapest being commandeered by the military. With the help of some fellow inmates and Zero's girlfriend, Agatha (Saorise Ronan), who bakes some stoneworking tools into pastry, Gustave breaks out of prison and he and Zero race to retrieve the painting and get out of Zubrowska, intending to lay low until the war is over. Unfortunately for them, the psychotic Jopling is on their trail, and soon enough the military police, led by Inpsector Henckels (Edward Norton), are after them as well, leading to a chaotic climax so marvelously pulled off by Anderson that you don't quite notice until after the film is over how many loose ends are left untied.

It's impossible to talk about The Grand Budapest Hotel without talking about the production design. In creating the world of the film, Anderson makes liberal use of miniatures to charming effect, whether it's to capture the majesty of the hotel itself, or to bring one of the film's major action pieces (a chase scene down a ski mountain) to life. There's a distinctly old fashioned feel to the proceedings, but it's mixed with a very modern, and often quite dark, sensibility. Anderson's films are typically defined by talk (specifically the brutally effective deadpan of its tone), but this film ventures frequently into action, from hand to hand combat, to free-for-all shoot outs. A fair number of characters die violent deaths in The Grand Budapest Hotel, including one instance where a character looses all the fingers from one of his hands before meeting his end, and there's an undertone of sorrow running from the beginning of the film straight through to the end, so that it feels like an elegy even as it unfolds as a caper. The sadness of the film is never oppressive but, especially towards the end, it's inescapable. I don't think I've ever felt quite so heavy at the end of an Anderson film before and that feeling stuck with me for quite some time after I walked out of the theater.

Yet, despite the funereal feel of the film's final act, The Grand Budapest Hotel has Anderson's typically light touch, aided in no small part by a gloriously playful lead performance from Fiennes. Fiennes is not an actor popularly associated with comedy (though his performance here and his performance in In Bruges suggests that he should be), but he carries this film with ease and turns in what quickly became one of my favorite performances in an Anderson film. Revolori proves a fantastic foil for him and the sprawling cast is filled out with familiar faces in big roles and small (Bill Murray didn't even have to say anything when he finally showed up; just seeing him was enough to bring a smile to my face). With its wonderful cast and its fast-paced storytelling, The Grand Budapest Hotel is a treat for the Anderson faithful, and the kind of film that could make a convert of those who have so far resisted Anderson's charms.
Posted by Norma Desmond at 8:00 AM

Definitely one of my favorites of the year so far. I didn't immediately enjoy it as much as Moonrise Kingdom, but the more I've thought about it - the more it's creeping up.