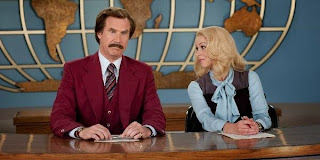 While watching Anchorman 2: The Legend Continues, it became increasingly clear that the first film captured lightning in a bottle. Both films are loose limbed and shaggy in their construction but, though Anchorman 2 arguably has a more concrete sense of thematic purpose, it's the original that emerges as the superior (by far) film, one which for all its silliness and sense of throwing everything at the wall and seeing what sticks, existed for its own purpose. The sequel knows what sticks to the wall and exists primarily to repeat those motions. This isn't to say that Anchorman 2 isn't funny, because it is, it's just that it's funny in the way that a joke you've already heard can still be funny without having the impact that it had the first time.

Anchorman 2 picks up more or less where the original left off, with Ron (Will Farrell) and Veronica (Christina Applegate) married and working as co-anchors on a network news program in New York. As the film opens, the network's nightly news anchor, Mack Tannen (Harrison Ford), reveals that he's retiring and chooses Veronica - and Veronica alone - to take over as his successor, while Ron is fired for being the worst anchor Tannen has ever seen. Ron's jealousy tears the marriage apart, and six months later the film finds him on his own in San Diego, working as an MC at Sea World and spiraling with depression until he's approached by an executive of GNN, a soon to launch 24 hour news network, with an offer to return to TV. Ron accepts the offer and after reassembling the team - Champ Kind (David Koechner) is running a fried chicken restaurant that specializes in "chicken of the cave" (bats); Brian Fantana (Paul Rudd) is working as a cat photographer; and Brick Tamland (Steve Carell) is presumed dead until he shows up at his own funeral - returns in triumph to New York. That triumph, however, is short lived, as he finds that in his absence Veronica has taken up with a new man (Greg Kinnear), and then learns that he'll be anchoring the 2 am to 5 am slot while the prime time slot will be anchored by Jack Lime (James Marsden).

In a moment of desperation Ron bets that his news program can garner higher rating than Lime's and he and his team proceed to engage in the most sensationalistic journalism possible. Though their tactics at first earn them the ire of GNN's manager, Linda (Meagan Goode), the ratings are great and as Ron and the team continue to up the ante, Ron's fame and fortune continue to grow and they're promoted to primetime. Soon, however, Ron falls victim to his own hubris (and the jealousy of Jack Lime, forced to change his name to "Jack Lame" as a result of losing the bet) and then enters into a period of self-exile, where he reconnects with Veronica and their son, Walter. When circumstances allow him the opportunity to make a comeback, he finds himself having to choose between his commitment to his family and his position as a news anchor - assuming that he can survive a no holds barred battle royale with other news anchors.

Like a lot of sequels, Anchorman 2 takes what works from the original and then makes it bigger, hoping that the increased scale will disguise the lack of freshness. That the film decides to rework a lot of the gags from the original is a shame, because it actually does have a lot of new things going for it that end up getting short shrift due to time constraints (though at 2 hours Anchorman 2 is long for a comedy). A subplot involving Brick's romance with an equally... challenged GNN worker played by Kirstin Wiig plays out on the edge of the narrative though it offers some of the film's best moments, while the film's satiric takedown of the way that 24 hour news networks have devalued actual news and journalistic integrity takes a backseat to race-based humor that doesn't always hit the mark. Basically, Anchorman 2 has a lot of assets that it fails to fully exploit.

To be sure, this isn't the kind of film that you go into expecting deeply explored themes (though I think that the original Anchorman had more to say about the battle of the sexes in the second wave feminist era than it's usually given credit for); it's the kind of the film you go into to turn off your brain a bit and just laugh. While nowhere near as quotable or lasting as the original, Anchorman 2 is a funny film in the moment - it couldn't be anything less with so many funny people in it. You will laugh, you just won't necessarily remember why a few days later.
Posted by Norma Desmond at 8:00 AM