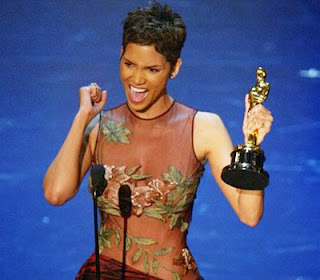 It had to come to this sooner or later. I think that Halle Berry's win in 2002 is one of the first that comes to mind when people think of the "Oscar Curse," yet when you examine the evidence, that notion seems to be less about Berry and her career specifically, and more about what Berry's win represented (and then failed to live up to). That's a lot for Berry to have to shoulder, and if her career has failed to build on her Oscar win, I don't think that's entirely her fault under the circumstances... but that doesn't mean that her career nosedive wasn't at least in part the result of some incredibly bad choices.

Berry's career has pretty much always run the gamut from the ridiculous to the sublime. She made her debut in Spike Lee's Jungle Fever in a small role as the crack addicted girlfriend of the protagonist's brother. Berry's performance is a strong one in a very colorful role, but her next several roles would be far more conventional, love interest and supporting player roles in the comedies Strictly Business, Fatherhood, and Boomerang, the Bruce Willis vehicle The Last Boy Scout, sports movie The Program, and the live action adaptation of The Flintstones. After all that, Berry once again found herself playing a crack addict in a serious drama, this time in Losing Isaiah, then was back to the supporting ranks for Executive Decision, before sharing top billing with James Belushi in the long since forgotten Race the Sun. She had her first real leading role in the thriller The Rich Man's Wife, which wasn't especially well-received, and then followed that up with the comedy B*A*P*S, which Wikipedia describes as receiving an "overwhelmingly negative" response from critics.

At that point, six years after her film debut, Berry's career consisted primarily of supporting roles that probably could have been played by anyone, and leading roles in two films which were largely hated by critics and hardly made a wave at the box office. Her prospects would change, however, with 1998's Bulworth, Warren Beatty's controversial but well-received comedy about politics and race, and the musical biopic Why Do Fools Fall in Love. This pair of films would be followed by the box office hits X-Men and Swordfish, which is perhaps a mixed blessing given that Berry is often singled out as one of the worst things about the former, while the latter gained much of its publicity from the fact that Berry is topless in part of it. Nevertheless, X-Men would ensure that Berry had a franchise to return to every couple of years, and for a while it seemed like she was being positioned as a potential action heroine. Thanks to X2 and Die Another Day, her career didn't immediately nosedive after she won Best Actress for 2001's Monster's Ball, but once things started to trend downwards, it plummeted pretty fast.

First there was Gothika, a horror movie which did decently at the box office but horribly with critics (as horror movies tend to do) and then the utter disaster that was Catwoman, which, despite its notorious reputation, actually didn't do badly at the box office. Then Berry reunited with Bruce Willis in the forgettable Perfect Stranger, made a couple of passes at returning to "respectable" projects with would-be prestige pictures Things We Lost in the Fire and Frankie and Alice, collected a paycheque in New Year's Eve, Garry Marshall's second film to just cram a bunch of actors into a movie centering on a holiday, and then starred in something I've never even heard of called Dark Tide, in which she is credited as playing a "shark whisperer." This was followed up by Cloud Atlas, one of the most critically divisive films of 2012 but one which I continue to believe will be the recipient of a much deserved critical reanalysis in a few years, and Movie 43, a "film" which will probably always be considered terrible. Her last film was The Call, which was a moderate box office success and received mixed critical reviews. But, still, this isn't the kind of career that an Oscar winner, particularly one whose win was as celebrated (and debated) as hers, should have.

So, is Halle Berry a victim of the Oscar curse, destined to never again reach the heights of Oscar glory and see her career slide into obscurity? For a number of reasons, I don't think so. For one thing, despite a perceived decline in the years since her Oscar win (the occasional movie about mutants aside), her career today really isn't all that different from her pre-Oscar career, except that the supporting roles in many quickly forgotten films are now leading roles in many quickly forgotten films. For another thing, I think the deck was always stacked against Berry being able to capitalize on her Oscar win to create a career defined by "prestige" projects. The number of significant roles available to women generally in Hollywood is small, the number of those roles that go to actresses of color smaller still, so Berry, despite her talents (mileage varies, of course, but I think that in the right roles she can be quite good), was always going to be at a disadvantage in terms of getting good leading roles and I think that the perception that her post-Oscar career has been a disappointment has more to do with what her win was supposed to represent than her actual prospects as an actress. When Berry became the first black actress to win Best Actress, it was seen as a watershed moment that, ideally, would have heralded more opportunities for women of color in leading roles, and to say that that didn't happen would be an understatement. While Denzel Washington's Best Actor win that same year seemed to clear the way for other black actors in leading roles (since Washington's win, Jamie Foxx and Forest Whitaker have also been awarded the Best Actor prize, while Don Cheadle, Terrence Howard, Will Smith, Morgan Freeman and Chiwetel Ejiofor have been nominated), it wouldn't be until 2009, when Gabourey Sidibe would be nominated, that another black actress would feature in the Best Actress lineup. At the time, the Oscars for Berry and Washington were touted in some corners as moments of change, but for actresses of color nothing really changed, so Berry's win and subsequent failure to maintain her career at that level is not just a disappointment of promise for her, but for the mainstream movie landscape generally, and for an industry that has always liked to credit itself with being about ten times more progressive than it ever actually is. Oscar curse? More like the curse of Hollywood's lack of imagination and unwillingness to change.
Posted by Norma Desmond at 8:00 AM