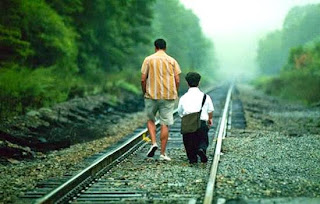 I'd heard of The Station Agent. I knew it had been well-received, and I knew that it was from the writer/director of The Visitor, a film which made it into my Top 10 for 2008. Yet it took me 11 years to finally see The Station Agent, a film so delightful, so effortlessly charming and affecting that I feel as though I let myself down by not seeing it earlier. A finely realized character study propelled by a trio of great performances, The Station Agent is alternately funny and melancholy, but above all it's a wonderful film.

The story begins with Fin McBride (Peter Dinklage), a train enthusiast who works at a model train hobby shop, inheriting a property with an abandoned train depot on it after the owner of the shop, and seemingly his only friend, passes away. With the shop now closed, Fin moves out to the rural property to live in the station, hoping that it's remote enough that he'll finally be free from the stares and comments of people who treat his existence like a spectacle. Almost immediately, however, he finds himself befriended (pretty much against his will) by Joe (Bobby Cannavale), a gregarious man who has been running his father's roadside snack truck beside the station and who is absolutely determined to hang out with Fin. Fin also finds himself involved with Olivia (Patricia Clarkson), an artist who, like him, also craves solitude to deal with the pain of her past, but who is drawn to him (at least at first) out of guilt after almost hitting him with her car (twice... in one day).

The three become unlikely friends, and more people begin to come into Fin's orbit including Emily (Michelle Williams), a librarian who likes Fin because he's the opposite of her boyfriend, and Cleo (Raven Goodwin), a young girl who is at first fascinated by Fin and then transfers that fascination to trains. Though he begins to open up slightly after Joe thoroughly breaks through his protective shell, Fin continues to keep at arm's length the world that continues to remind him that he's different from everyone else. Things come to a head when the makeshift family of misfits he's formed with Joe and Olivia suddenly collapses under the weight of Olivia's troubles, leaving Fin bereft and angry. Rather than turning away from society, however, Fin resolves to find a way to repair his fractured relationships with Olivia and Joe and stop trying to hide himself away.

The Station Agent succeeds in no small part on the strength of Dinklage's performance. Fin is a character who has been singled out his entire life, who is both frustrated by those who ridicule him because he looks different, and weary of those who would show him kindness because he doesn't trust it. He lives behind the self-protective wall that he's erected between himself and the rest of the world, and presents as someone who is constantly waiting for the boom to drop. Fin is a very solemn character, but Dinklage's performance has such a lightness of touch that Fin never feels heavy and despite his desire to be left alone, he never feels entirely closed off. It's a nuanced and deeply felt performance that is perfectly complemented on all sides by Clarkson and Williams as two women who see Fin as a person and are drawn to him for different reasons (and held back for reasons entirely unrelated to his size), and especially by Cannavale, whose performance is like a relentless burst of energy and who makes for a perfect foil for Dinklage. Much of the comedy in the film comes from the interplay between Dinklage and Cannavale, which acts as a nice counterbalance to the darker moments in the film.

The Station Agent was McCarthy's first feature as a director, and it's a debut which shows incredible confidence and skill. It doesn't push, or contrive its characters into impossible positions; rather, it hangs back, letting the characters set the pace of the story and letting them breathe. The film is ultimately a story of three lonely people - two of whom (Fin and Olivia) have voluntarily shut themselves away from others while the other (Joe) is a people person who has found himself somewhat isolated by the burdens of family responsibility - who find each other, but who can't be bound to each other by that commonality alone. They aren't friends who just "happen;" they're people who have drifted together and, in the end, actively decide to be friends, to let each other into their lives, and to be alone together rather than just alone. In many ways The Station Agent tells an incredibly simple story, but it's a story filled with so much humanity and warmth that it runs very deep. It's a film that is quiet and unassuming, but it's also great.
Posted by Norma Desmond at 8:00 AM

I love this movie. Great story and cast. And music.