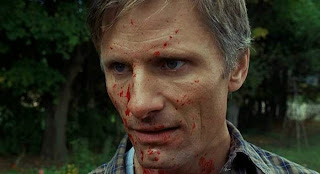 On the surface, David Cronenberg’s A History of Violence is a film about a man whose past catches up with him, tearing his present-day life apart. Beneath the surface – and none too far – it is a film about our contradictory view of violence, how it is abhorred when used in the commission of a crime but glorified and celebrated when deployed in an act of self-defense. The film’s protagonist is at once a bad man who kills for bad reasons and a good man who kills for good reasons, and the question the film asks is not whether the man can be reconciled to these two sides of himself, but whether society can reconcile itself to the fact that the two sides can exist in one individual man and within the collective consciousness that makes up society itself.

In the first of his three (to date) collaborations with Cronenberg, Viggo Mortensen anchors the film with what is essentially a dual role: unassuming family man Tom Stall, and ruthless mobster Joey Cusack. For years he has been living quietly as the former, married to Edie (Marie Bello), and raising two children, teenage son Jack (Ashton Holmes) and younger daughter Sarah (Heidi Hayes). The peace of his existence as Tom is torn away after two men attempt to rob his diner and Tom ends up killing both in an act of self-defense. He becomes a minor media celebrity as a result, which attracts the attention of Carl Fogarty (Ed Harris), a mobster from Philadelphia who recognizes him as Joey. Refusing, at first, to admit to his past as Joey, Tom ends up in a showdown with Fogarty and his associates, leaving them dead on his front lawn and leaving his family painfully aware that he is a stranger to them. His life as Tom having come apart, he resumes his identity as Joey to return to Philadelphia and tie up the loose ends left there, which means paying a visit to his brother, Richie (William Hurt). Though his desire is to finally settle the past and make a clean break from it, Tom/Joey quickly comes to realize that resolution can only come through death - either his brother's or his own.

The line between order and chaos is never solid in A History of Violence and Cronenberg plays around a lot with the notion that the quaint outer image of modern society hides not only a foundation built on violence, but a continuing capacity for it. The United States, like most nations, is built on violence - the violence out of which it was created, expanded, and settled – and though it presents an orderly image, beneath that image there remains the potential of descent into violence chaos (it’s no coincidence that this film was made during the height of the War on Terror). A History of Violence begins with the Stalls depicted as a picture perfect family, each member rushing to the side of Sarah to comfort her after she has a bad dream. They are the perfect family – wholesome, beautiful, ideal – but that’s an image that cannot be sustained and cannot stand up to scrutiny and Cronenberg underscores this by making it deliberately artificial. Whether the characters realize it or not, it is performance, the performance of what society wants to be but, ultimately, is not and once the curtain has been pulled back, there’s no returning to that idealized existence.

A History of Violence is easily one of Cronenberg’s best films, perhaps even the best. It builds itself on the quiet intensity of Mortensen’s performance and then opens out to make room for the volatile energy brought by Hurt's off-the-wall performance, doing so without ever allowing that manic energy to take over the tone of the movie. Throughout Cronenberg displays a measured and firm direction, less stylistically bold than some of his other films, perhaps, but singularly and precisely focused to bring the story into razor sharp relief. Cronenberg has had flashier films and riskier films, but in its steady, quiet way A History of Violence is a masterpiece.
Posted by Norma Desmond at 8:00 AM

your blog are well done and you deserve more attention i subscribe and i wait for more!!!. Myrtle beach houses for sale