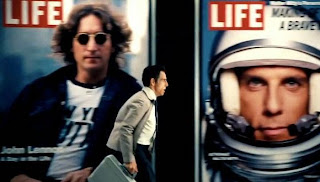 As funny as it is, you wouldn't expect the writer/director of a film as profoundly silly as Zoolander to later come out with a film as contemplative and ambitious as The Secret Life of Walter Mitty. A film about living as big as you're capable of dreaming and dreaming as big as you can, The Secret Life of Walter Mitty settles for nothing less than a grand vision. It doesn't always reach the very high bar it sets for itself, but it never fails to be entertaining, alternately funny and touching, and always stunning to look at.

Like the short story on which it is based, and the 1947 film adaptation of the same name, The Secret Life of Walter Mitty is about a man who copes with an unfulfilling life by escaping into fantasy. In this version the titular character is a negative assets manager at Life Magazine who once dreamed of traveling the world but had to give it up in order to help his family after his father's sudden death. As the film opens he's attempting to connect with his coworker Cheryl (Kristen Wiig) via eHarmony because he's been unable to approach her face-to-face, only to run into problems when he tries to initiate contact. While waiting for his train and dealing with tech support (Patton Oswalt), Walter drifts into fantasy, missing his train as he's "zoned out." Once he gets to work he learns that Life is being shut down and that a new photograph sent in by Sean O'Connell (Sean Penn) - unseen by anyone but described by the photographer as representing the "quintessence" of Life - will be used for the final cover. The only problem is that the negative of that specific photograph is missing, having gotten separated from the rest of the package sent to Walter by Sean.

Under pressure from the corporate transition manager (Adam Scott), Walter embarks on an epic quest to find the missing negative. With Cheryl's help tracking down the eternally elusive Sean's contact information, and after using the negatives that did arrive as clues, Walter determines that Sean is in Greenland and hops a plane to go find him. Once there, his exciting fantasy life begins to give way to an exciting real life, as he finds himself jumping from a helicopter, fighting with a shark, moving on to Iceland, and skateboarding to Eyjafjallajokull just in time to flee the erupting volcano. After all that, he returns briefly to New York where he comes to believe that his romantic interest in Cheryl will remain unrequited, and receives new clues to Sean's whereabouts from his mother (Shirley MacLaine), to whom Sean had paid a visit when he was last in New York, which Walter would know if he hadn't been in the midst of a fantasy as she told him. So Walter sets off again, this time to the Himalayas, hoping to find out what happened to the missing picture before it's too late.

The key theme of The Secret Life of Walter Mitty is the difference between life and "life," between humans connecting with each other and the world around them and humans retreating behind a barrier which offers the illusion of real connection. Life Magazine is about to become "Life online," while Walter's personal life has already become an online life in which it seems more sensible for him to go through a third party in order to talk to a woman who works in the same office with him, with a further layer of disconnect added by virtue of the fact that his real life is constantly being shoved aside by the elaborate fantasy life which acts as a stand in for all the things he's never had the opportunity to do. Once Walter begins seizing the day and engaging with life and with himself in a new way, the fantasies begin to fade, and the "quintessence" of Life will turn out to be something which helps create Life and which will only be found once Walter starts living the life that he'd put on hold so many years earlier. Although the film might be construed as arguing that we're being swallowed up by the internet, with all of our interactions being facilitated through it, Walter Mitty isn't quite that simple. One of the most consistently positive interactions Walter has throughout the film is with the eHarmony tech, who comes to be Walter's greatest cheerleader as he tries to help him build his online profile and who comes to his rescue late in the film, meeting him face-to-face. The internet isn't the enemy; it's something that can connect you to people and places that you would otherwise never meet or reach, it just shouldn't be the entirety of your life. The world is smaller than ever thanks to technology, but it's still a big world and should be experienced personally, too.

Stiller does a fine job with this material, though the film never delves quite as deeply into it as it could, focusing much of its attention on expressing the grandiosity of its ideas visually rather than narratively. The film looks great, though it could be argued that it calls attention to itself a little too much by way of shots which practically scream with their own sense of importance. Still, The Secret Life of Walter Mitty finds a nice enough balance between comedy and drama, and is anchored by such a winning performance by Stiller, that it makes it more than worth seeing. If this film is an indication that Stiller is looking to transition into the realm of grand, serious movies, then I think we have a lot to look forward to from him as a filmmaker. The Secret Life of Walter Mitty isn't perfect, but it shows that Stiller has the talent to go to the next level.
Posted by Norma Desmond at 8:00 AM