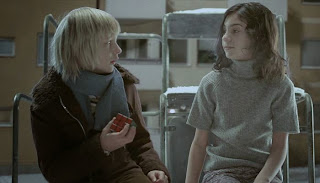 “I’m twelve. But I’ve been twelve for a long time.” Tomas Alfredson’s Let the Right One In, adapted and based on the novel of the same name by John Ajvide Lindqvist, is a vampire story, but more than that it’s a story of profound loneliness. The two characters at its center are outcasts, one self-isolated by necessity, the other rejected by his peers, who find each other and develop a bond – but it’s a dangerous bond, one created by a mutual fascination with and need for violence. Since this film’s release (if not before) vampires have become so de rigueur in pop culture that they’ve become mundane, but thanks to its almost poetic flourishes and the two deeply felt and compelling performances that drive the story forward, Let the Right One In remains a vital entry in the genre and an absolutely captivating film.

It begins with Oskar (Kare Hedebrant), alone in his room and re-enacting the torment he experiences every day at school, but this time casting himself as the tormentor. Bullied at school and left to his own devices by his mostly absent parents outside of school, Oskar is a ticking time bomb who keeps a hunting knife under his mattress and harbors a secret obsession with murder, collecting newspaper clippings of horrendous crimes. One of those clippings involves a recent murder that occurred nearby and which, unbeknownst to Oskar or anyone else, was committed by his new neighbor, Hakan (Per Ragnar), in service to Eli (Lina Leandersson), the seemingly 12 year old girl who lives with him and meets Oskar one dark night outside their apartment building (that scene is one of the film's best for the eerie way that it introduces Eli, who appears suddenly behind Oskar, standing atop the structure Oskar just walked past as if she floated down to it from above - which she probably did). Though Eli warns him that they won’t be friends, she seems as drawn to him as he is to her. She counsels him in how to stand up to his bullies and, later, reveals the truth about her nature to him and instead of being repelled, Oskar’s bond to her tightens. She becomes the only “good” thing in his life and eventually his savior – though in truth her presence is a dark omen, and the seemingly happy ending can only be an illusion if you stop to think about it for even a moment.

Like virtually all vampire stories, Let the Right One In is steeped in psychosexual tension. Eli is a character of ambiguous gender, no more a girl than a boy, just as she isn’t a child but isn’t an adult either, and Oskar is drawn to both sides of her (“If I wasn’t a girl, would you like me anyway?” she asks, to which he nonchalantly replies that he supposes he would). As a girl, she’s a chastely romantic companion with whom he can take an active and traditionally masculine role by taking care of her (such as when he lends her some of his mother’s clothes) and protecting her (when he keeps an intruder from killing her as she sleeps); but as a boy Eli can be his mentor, teaching him how to deal with the bullies, and be his protector when he needs it. The elastic state of Eli’s being allows them both to slip in and out of traditional gender roles with ease.

The psychosexual drama runs deeper than that, though, thanks to the presence of Hakan, whose relationship with Eli is like a fun house mirror reflection of Oskar’s relationship with Eli. The exact nature of Hakan and Eli’s relationship is hinted at but never elaborated, with the balance of power depicted as being in Eli’s favor. In Hakan and Eli, we may be seeing what lies in store for Oskar and Eli, with the former acting as a cover for the latter, giving the illusion of normalcy, but also doing her dirty work, killing so that she doesn’t have to and so that she can survive. “I don’t kill people,” he tells her. “No, but you’d like to... if you could.” Though from Oskar’s point of view this is a story of him finding a kindred spirit and triumphing over his tormentors, it’s really the story of Oskar’s seduction into evil, sealed in the end with a “kiss.”

With a story told in a way that is deeply engrossing, and filmed in a way that is intensely atmospheric, Let the Right One In is a horror film that transcends the boundaries of its genre. There’s a brutal beauty to the way Alfredson presents this story, the graceful movements of the camera and the exquisitely composed shots contrasting perfectly with the viciousness playing out on screen, and the director coaxes incredibly rich performances out of the two child actors. Leanderson, in particular, delivers a nuanced performance which blends childlike qualities with a heavy, melancholy maturity. In all respects, Let the Right One In is a transfixing film worth revisiting again and again.
Posted by Norma Desmond at 8:00 AM