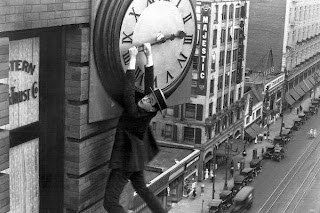 Everyone knows Charlie Chaplin. Most people know Buster Keaton. But outside of film geeks, few know Harold Lloyd, even though he was one of the most popular and influential comedians of the silent era. You can maybe chalk that up to the fact that his personal life was far less volatile than that of either Chaplin or Keaton, unmarred by the sex scandals that plagued the former or the tragic alcoholism of the latter - by not being notorious, Lloyd is doomed to the fringes of remembrance. You could also, however, chalk it up to the fact that Lloyd's films are as nonthreatening as his persona, films that are good, sometimes close to great, but ultimately lacking that extra edge that separates the best from the rest. That said, Lloyd's films are worth seeking out whether you're a film buff or simply someone curious about silent comedy, and Safety Last! is the best place to start, featuring as it does one of Lloyd's best known stunt pieces (arguably one of the best known stunt pieces in all silent comedy).

In Safety Last! Lloyd is "the Boy," a small town guy off to make his fortune in the big city so that he can marry "the Girl" (Mildred Davis). Once in the city, the Boy gets a job at a department store but lives a hand to mouth existence with his roommate "the Pal" (Bill Strother), barely able to make ends meet and having to hide from the landlady in order to avoid being evicted. In an effort to keep up appearances, the Boy writes letters to the Girl detailing his rise in the store, and sends her jewelry to drive the idea home. This, in turn, gives her the idea to come to the city so that they can be married, since she believes that he's succeeded in making his fortune and is now in a position to support a wife. Keeping up appearances when she surprises him at work is hard enough, but since her intention is for them to marry immediately, he's got to find a way to exchange the illusion of success for the reality.

The Boy gets an opportunity to make good when he overhears the store's general manager stating that he would give $1,000 to anyone who could draw a crowd to the building. Having earlier witnessed the Pal's ability to scale a building (the result of the Boy accidentally getting the Pal into trouble with a cop), the Boy talks the Pal into climbing the 12-story building, allowing the store to put out ads and turn it into a major event. Problems arise, however, when the cop shows up on the day of the event and spots the Pal, who had managed to evade arrest after their last encounter, and gives chase, forcing the Boy to make the climb himself while the Pal tries to lose the cop, promising to take over the climb further (and then further and further) up the building.

First and foremost, Safety Last! is a very playful movie, and the skill with which it's playing is set up right from the beginning. The opening shots of the film set it up to look as if the Boy is behind bars, saying his final goodbyes to his loved ones before being executed, the noose hanging ominously in the background. The film then pulls back and shows that the Boy, the Girl, and the Boy's mother are at a train station, the bars are a ticket barrier, and the noose is a pickup hoop. It's all perfectly done and, like so many of the films visual gags, performed with a lightness of touch all the more impressive for the meticulousness of its construction. The comedy in Safety Last! comes from the way that simple situations just build and build and build but somehow never topple over. Take, for example, the film's climatic stunt, wherein the Boy scales a 12-story building, and consider how many elements the film plays with at once. There is, firstly, the purely physical feat of Lloyd climbing the building (in actuality Lloyd didn't climb a 12-story building, but even taking into account the help of camera effects, the stunt he performed was still dangerous). Then there's the comedy inherent in the fact that he keeps getting to meeting points with the Pal, only to have the cop catch up and the Pal take off again, promising to meet the Boy a few floors up and take over. Then there are all the problems the Boy encounters during the climb, from excited spectators hanging out of windows, to a tennis net tossed out a window and landing on him, an angry dog that tries to bite him, and, of course, the clock which almost sends him to his doom. Safety Last! keeps a lot of plates spinning at once, but between them Lloyd and directors Fred C. Newmeyer and Sam Taylor make it look effortless.

Safety Last! is a very funny movie with impressive, thrilling stunt work, and Lloyd has a charming screen presence that, at his best, makes him as winning as Chaplin or Keaton. Yet, for all the film has going for it, it never quite reaches the heights that the films of those other two masters reached habitually. Safety Last! is pure entertainment without ever digging very deep, using a simple and straightforward story as a springboard for a lot of crazy hijinks. It works well for what it is, and I would recommend it as a gateway for anyone looking to start exploring silent film, but it's ultimately just the tip of the iceberg in terms of the important surviving works of the silent era.
Posted by Norma Desmond at 8:00 AM