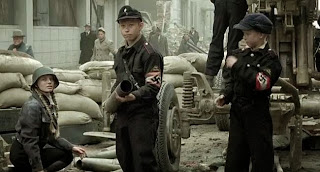 It’s a shame that, ten years on, Oliver Hirschbiegel’s Downfall is now probably best known for the Youtube meme it inspired. Not that some of those parodies weren’t kind of brilliant, but this is a powerful, superbly made film that deserves to be known for more than an isolated scene of Hitler yelling. It’s an important film about the depths of fanaticism, the terror of being on the losing side of a conflict, and the most profound kind of regret. Although Hitler figures prominently into the story, it’s not a film about Hitler, but about the kind of mindset that allows a figure like Hitler to rise to power and institute a policy of horror that can be allowed to proceed unchecked.

The story of Downfall is filtered through the eyes of Traudl Junge (Alexandra Maria Lara), who was Hitler’s private secretary from 1942 until 1945 and was in the bunker with him and his entourage until the Allies took Berlin. The Hitler (Bruno Ganz) she knows is a man who was once dynamic, but who has been broken by the growing realization that the war will be lost. Though he screams pointless orders and makes plans for army units that have long since been swallowed up by the fighting, Tradul does not see him as a raving lunatic, but as a man she reveres enough that she willingly stays in the bunker even when there comes a point where she no longer has to. That she can feel this way about a man considered one of history’s greatest monsters is understandable only because her world has become increasingly cloistered, defined by the Nazi propaganda that has surrounded her for years outside the bunker and now, inside the bunker, surrounded by people whose feverish belief leads to declarations that they “don’t want to live in a world without National Socialism.”

The world inside the bunker, where most of the film takes place, is unreal, but so is the world outside the bunker. In the crumbling Berlin, children have taken up arms and fight and die brutally as soldiers who consider themselves the very last line of defense. Men hang in the streets, punished in the final days of the war for “betraying” the Reich, and other incidents of random, senseless violence mark what remains of the population – and that’s before the Russians move into the city. The destruction of Berlin unfolds in vicious, chaotic fashion, the city descending to the edge of oblivion while the architects of the disaster – figures like Hitler and Goebbels (Ulrich Matthes) – opt to take their own lives, abandoning those who remain to suffer the brunt of the consequences, though in accordance with the new mythology that will take root post-war (hinted at through the film), many will plead ignorance of the evil wrought by National Socialism.

But ignorance is not the same as innocence, which is the point of Downfall. Though Hirschbiegel’s reimagining of the final days of the war is visceral, compelling, and impressive in its technical aspects, none of the fictionalized scenes are as powerful as the interview scenes which bookend the film and feature the real Traudl Junge speaking for herself. In these scenes we see a woman still trying to come to grips with the past, with the things she did and the things she did not do:


All these horrors I’ve heard of during the Nuremberg process... That shocked me deeply. But I hadn’t made the connection with my past. I assured myself with the thought of not being personally guilty, and that I didn’t know anything about the enormous scale of it. But one day I walked by a memorial plate of Sophie Scholl... I saw that she was about my age and she was executed in the same year I came to Hitler. And in that moment I actually realized that a young age isn’t an excuse, and that it might have been possible to get to know things.

These haunting words, with which Hirschbiegel ends the film, speak to one of the story’s larger points. Passive collaboration – not directly participating in something that you know is happening, but implicitly condoning it through silence – is still collaboration, and in this moment Junge isn’t just speaking about herself and the Third Reich, but about the world and all the people who inhabit it. Arguably the boldest thing that Downfall does is that it humanizes Hitler, reducing him from a larger than life figure to a mere human being (a human being with a great deal of power and a great capacity for evil, but a human being nonetheless). If a human being is capable of acting to cause such destruction, then a human being is capable of acting to prevent such destruction, and the downfall of the title is both the literal downfall of a dictator, and the figurative downfall of a society that fails to stop his rise. Downfall isn't just a powerful (and powerfully made) film, it's a moral imperative.
Posted by Norma Desmond at 8:00 AM