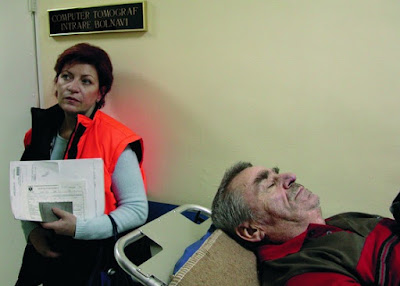 Death be not proud – or, in the case of The Death of Mr. Lazarescu, the dying be not proud. A drama (and sometimes a very dark comedy) about one man’s long, final night on Earth and his slow descent into the great beyond, this Romanian New Wave film is a fascinating, patient, and keenly observed character piece from filmmaker Christi Piui. At 153 slow and methodical minutes exploring a deeply depressing subject, The Death of Mr. Lazarescu isn’t going to appeal to everyone, but the richness of the piece allows it to fit right in with the best that the Romanian New Wave has had to offer, and even if it’s a film that one must “endure” rather than “enjoy,” it’s still a film that resonates and grows in your esteem as you think back on it after watching it.

The Death of Mr. Lazarescu is ultimately about one character, and it really isn’t Mr. Lazarescu (Ioan Fiscuteanu), an old man who takes ill but has trouble getting anyone, including the paramedics, to come and help him. The film is really about Mioara (Luminita Gheorghiu), one of the paramedics who finally arrives to take a look at him and who spends the rest of the night shuttling Lazarescu around to four different hospitals, trying to get him treatment. Each hospital is a horror show of overcrowding, staffs stretched to the very limit, and apathy resulting from exhaustion, and though Lazarescu is discovered to be very sick as he’s suffering from a blood clot to the brain, only Mioara seems to care while the doctors at the hospitals are willing to do little more than belittle her and question her passion for finding help for her patient. The night goes on, and Lazarescu slowly fades away until he reaches the point where he’s no longer able to communicate, leaving Mioara to speak for him as best she can – if only she can get someone to listen.

Much of the power of The Death of Lazarescu comes from the deft way that Piui subtly shifts focus on the story goes on. The opening of the film belongs to Lazarescu and, if you didn’t know going into it that Mioara becomes the major character, then you might think she was just another character who is going to pass through while not giving credence to Lazarescu’s complaints. Instead, the longer the film goes on, the more Mioara begins to displace Lazarescu, his growing passivity and decreasing ability to advocate for himself leaving Mioara to become the character who drives the narrative forward. The less others care about what happens to Lazarescu (this is partially as a result of the fact that he reeks of alcohol, so most attribute his complaints to drunken ramblings), the more she cares and the more determined she becomes to get someone to listen and help, even in the face of a massive amount of derision directed at her from the doctors at the various hospitals who don’t appreciate having her tell them how to do the job they are consistently refusing to do in the first place. Piui gets us deeply invested in Mioara’s quest and then, at the end and with another storytelling sleight of hand, he shifts the focus again, letting Mioara exit the film and returning the protagonist role to Lazarescu as he endures what we’re left to believe are his final moments. As a narrative strategy, this works wonderfully, as it gives the viewer one final jolt at the end by removing the character who has become the point of identification and uses that shock of loss to make those final moments with Lazarescu himself, who finally gets the medical attention he needs but only now that it’s too late, all the more resonant.

Watching The Death of Mr. Lazarescu requires a great deal of patience, as it is crafted in such a way that it puts the emphasis on waiting (fruitless waiting, in this case) over movement, and uses the banalities of interactions between strangers to give scenes some sense of structure. Those elements, in addition to Piui standing at arm’s length from the action so that the camera acts more as an observer than anything else, add to the documentary feel that the filmmaker develops and which gives the production a sense of incredible immediacy, and makes that patience well worth it as the story only seems to get richer the more Piui slows things down and just lets things play out. The Death of Mr. Lazarescu is an auteur movie through and through, and for many reasons can be considered an acquired taste, but it’s an excellent film, the kind that stays with you long after the cookie-cutter stuff churned out by Hollywood has started to fade away. It’s one of the great, and unique, films of the century so far.
Posted by Norma Desmond at 8:00 AM