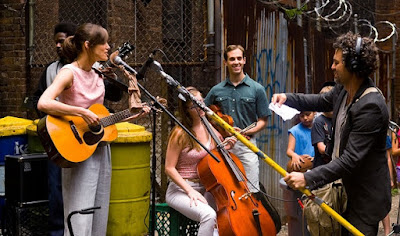 Despite the fact that I love John Carney's previous film Once, it's taken me a long time to finally get around to seeing his latest, Begin Again. This was partly due to trepidation that, like a band who follow up a breakthrough album that was low budget and rough around the edges but also ringing with authenticity, with a more put-together studio album that has all the gloss of a big production but less soul than the previous effort, it would be entertaining, but also a bit disappointing. This wasn't an entirely unfounded fear, as Begin Again covers a lot of the same thematic ground of Once, but does it with big stars, a bigger city as its setting, and higher production values, while sacrificing the scrappy charm that makes the previous film so special (this isn't to say that Begin Again is without charm, but its charms are certainly more generic). The other reason I was reluctant to see the film is because of the presence of Adam Levine, though had I known that he would be styled in such a way that he looks just a little douchier every time he appears on screen, this wouldn't have been a concern.

Set in New York, Begin Again stars Keira Knightley and Mark Ruffalo as Gretta and Dan, respectively, the former an aspiring songwriter ready to give up and go back home to London, the latter an executive at an independent record label who has seen better days. Gretta is despondent over her recent breakup with her boyfriend and writing partner, Dave (Adam Levine), with whom she came to New York so that he could work on an album after having found success contributing music to a movie soundtrack. As his star rises, however, he begins to fall into the trappings of fame and has an affair with the assistant of one of his producers (a fact which he lets Gretta discover in the most dickish way possible, short of her finding them in bed together), bringing an end to his relationship with Gretta. With nothing keeping her in New York, she makes plans for an immediate return to London and her friend, Steve (James Cordon), talks her into having one night on the town together before she goes, which ends with him talking her into getting up on stage at an open mic and reluctantly playing one of her songs. Although she gets a middling response from most of the crowd, one person in the audience embraces her performance enthusiastically - that's Dan, who sees something in her performance that no one else does, and that's only partially because he's wasted.

Dan's story is not entirely dissimilar to Gretta's, at least in terms of heartbreak. As the film opens, he's separated from his wife, Miriam (Catherine Keener), a music journalist whose affair with another man resulted in her leaving Dan, only to then be dumped by the other man. In the aftermath of the marital breakdown, Dan's life has spiraled downwards, with him being kicked out of the company that he co-founded, and booze becoming a seemingly constant companion. When he sees Gretta perform, his spirit is suddenly lifted and he's reminded of why he got into the music business in the first place. He tries to sign her to his label (which he is no longer part of), but she doubts his legitimacy and remains determined to cut her losses and go home. Eventually, however, he's able to talk her into making an album together, one which would be recorded live at various locations around New York and using a team of musicians that they're able to recruit from various places, including Dan's daughter Violet (Hailee Steinfeld). In the process of making music together, something begins to develop between Gretta and Dan, though the lack of closure each of them has on their most recent relationship makes it difficult, and perhaps impossible, for them to move on together.

At its best, Begin Again taps into that same sense of the inherent joy of music and performance that helped to make Once such a special and engaging film. Its best scenes are those where everyone is coming together to make a song, and the scenes in which Gretta and Dan simply talk about music and what it means to them. Although the difference in age and experience between the two characters makes their relationship verge on cliche, Ruffalo and Knightley have a surprisingly comfortable chemistry together and manage to sell the budding relationship that develops between them, at least insofar as it's something that's there and genuine but destined to remain unrealized. Were it not for the emotional beats that the film chooses to play, and which make it a near certainty from the start that Dan will ultimately find his way back to Miriam, I'm not sure that this would actually work, as it would transform the context of the film's events and potentially turn it into another story of a once great man who flames out in middle age only to create a second chance for himself with the help of a young muse. As it is, some viewers might read it that way nevertheless, but I think that as writer and director Carney shows enough restraint in his depiction of the central relationship, and gives enough development to Gretta as a character, to keep the film from being as conventional as that.

Generally speaking, I liked Begin Again a fair bit. Ruffalo and Knightley both deliver solid, engaging performances in the lead roles, and the supporting ranks are ably filled out by actors such as Keener, Cordon, and Steinfeld, and the film itself is very entertaining. At the same time, however, it openly invites comparison to Once - not just because they're both musicals, but also because they're both premised upon a "let's do this our own way" attitude, a love story that ends happily unhappily, and share certain similarities in the dynamic between the two main characters - and can't help but come up short. Late in the film, Gretta and Dave discuss the song "Lost Stars," which she wrote for him and which he has put on his album, but with a new arrangement that she doesn't quite like. He insists that the new arrangement is catchy and audience friendly, while she sees it as draining the song of some of what made it special in the first place. That's sort of what Begin Again is like, it's the more mainstream and polished version of the story, but it doesn't cut as deeply.
Posted by Norma Desmond at 6:33 PM