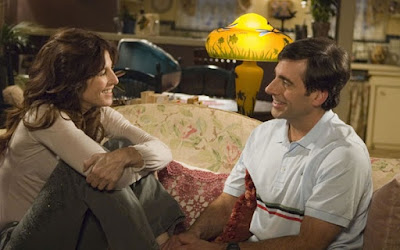 To watch The 40-Year-Old Virgin in 2015 is to realize how rapidly things have changed at a cultural and technological level in the last 10 years. It's hard to recall now a time before Judd Apatow was one of the most dominant figures in comedy, a man who as a writer and director and, especially, as a producer has had his hand in so many of the biggest movie comedies of the last decade, just as it's sort of weird to think that as recently as ten years ago people still had a use for videotape and VCRs, and that a group of friends looking to help their pal meet someone would, at no point, turn to the internet. The 40-Year-Old Virgin is like a time capsule that way, but it remains one of the better romantic comedies of the last decade.


The Story
A lonely guy (Steve Carell), who has trouble relating to others and is involuntarily celibate, makes friends with his three co-workers (Paul Rudd, Romanyy Malco, and Seth Rogan) and accidentally reveals to them that he's still a virgin. The three new friends make it their mission to help him finally lose it, giving him a lot of bad advice in the process that just makes him want to give up on the idea entirely. When he meets a woman (Catherine Keener) who expresses interest in him, but has been burned in the past, they embark on a relationship and agree to wait until they've been out on 20 dates before having sex. Without the pressure of sex looming over them, their relationship quickly progresses, but when the 20th date occurs, panic sets it and threatens to destroy the relationship entirely.


The View from 2005
The Good: "Here's a movie that could have had the same title and been a crude sex comedy with contempt for its characters. Instead, The 40-Year-Old Virgin is surprisingly insightful, as buddy comedies go, and it has a good heart and a lovable hero." Roger Ebert

The Bad: "Virgin is occasionally guilty of trying too hard, and there are a few dry spells that probably could have been cured by judicious editing. For all the cleverness displayed here, there’s not quite enough gas in the tank to sustain what’s nearly a two-hour running time." - Brian Lowry, Variety


The View from 2015
As written by Judd Apatow and Steve Carell, The 40-Year-Old Virgin is an odd combination of attitudes. On the one hand, it's a somewhat raunchy sex comedy in which the four principle male characters speak to each other in mildly graphic terms about women and sex, and in which some of the secondary female characters are allowed to be, as the male characters might describe them, "freaks" (without that necessarily being a value judgement). At the same time, however, the film is sort of conservative in its view of relationships, seeing marriage as the ultimate goal and the central relationship as having particular value for the fact that the couple wait until being married to consumate the relationship, in addition to ensuring that each of the three friends is paired up at the end (which involves glossing over how completely terribly one of those friends treats his girlfriend throughout the movie). It's almost like a Jane Austen story that way, with each of the men meeting their perfect match by the end, regardless of how unlikely such a prospect might have seemed at the beginning.

Those two attitudes might seem like a contradiction that would make the story untenable, but The 40-Year-Old Virgin works because it finds a way to balance all its elements. It can be outrageously funny as it follows Carell's character in his sexual misadventures, but it is also an inherently sweet movie that takes great care in developing the relationship between Carell and Keener's characters. Although its premise begins in a place that is usually found in high school sex comedies, the relationship portrayed here is very mature and very adult, one based in two people getting to know each other on an emotional and intellectual level and discovering that they enjoy each other's company. It helps, of course, that Carell and Keener have a great chemistry for what this story is. Both characters are appropriately guarded due to their past experiences, and what draws them together isn't an explosive sexual chemistry, but something much gentler and more tentative. Both actors deliver strong performances that help ground the film while Rudd, Rogan, and Malco (in addition to Elizabeth Banks, Jane Lynch, and Leslie Mann) push it to more outlandish places.

While there are things about The 40-Year-Old Virgin that make it seem a little dated, such as a sequence which exists solely to use a transgender woman as a punchline and an ongoing exchange between the friends about how each of them know the other is gay, neither of which I think would make it into the film if it were made today, like all classics this movie still works despite the passage of time. It may not be as laugh out loud funny as it was ten years ago because it no longer has the element of surprise, but it is still funny and it's the sort of compulsively watchable movie that you can watch over and over again and which compels you to pause and see it through every time you catch it on TV.
Posted by Norma Desmond at 8:00 AM