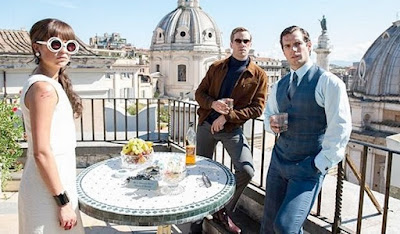 It's a shame that The Man from U.N.C.L.E. seems destined for the summer movie season's remainder bin. While it is, at best, the third best spy movie of the summer of 2015, it's the sort of inconsequential, fluffy fun that can really hit the spot during the summer season, particularly this close to the end. It's a film that coasts on style and on charisma, but what is the summer movie season without a few entries like that? U.N.C.L.E. isn't going to knock your socks off and you'll probably have forgotten all about it by the time the holiday movie season rolls around (which doesn't bode well for the studio's obvious hope to turn this into a multi-film franchise), but it's plenty of fun while you're experiencing it.

Henry Cavill and Armie Hammer star as Napoleon Solo and Illya Kuryakin, respectively. The former is a CIA agent, the latter a KGB agent, and the two meet first as combatants when Solo tries to extract Gabby Teller (Alicia Vikander), the daughter of a former Nazi scientist, from East Berlin. In the wake of his success, Solo believes his mission to be complete and is ready to move on to other things until his handler (Jared Harris) informs him that his work has actually only just begun. To the shock of both Solo and Kuryakin, the US and the Soviet Union have decided to combine forces against a common enemy, an organization with Nazi ties that is trying to create a nuclear weapon with the aid of Gabby's uncle, Rudi (Sylvester Groth) and her father (Christian Berkel), and the two men, both of whom insist that they work better alone, are now forced to work together as partners.

With Gabby in tow, the reluctant partners head to Rome, where Kuryakin poses as Gabby's fiancee as a means of getting close to her uncle, while Solo uses his charm to try to make inroads with Victoria Vinciguerra (Elizabeth Debicki) who is heading up the nuclear warhead plot along with her husband, Alexander (Luca Calvani). Needing to gather intel and stop the organization from gathering the remaining pieces they need to complete their warhead, Solo and Kurayakin work against each other almost as much as they work with each other, but slowly come to develop a grudging respect for one another. Meanwhile, tensions rise between Kuryakin and Gabby as they pretend to be engaged, though that attraction expresses itself most often in aggression, and Gabby may not be the pawn that the US and the Soviet Union take her for granted as being. Similarly, the super spies may have underestimated the Vinciguerras and, in particular, Victoria, who emerges not only as the mastermind of the operation, but a particularly vicious one at that.

While spy movies generally rely on high tension and fast action, U.N.C.L.E. is a pretty laid back affair, content to bask in its '60s stylings and Mad Men meets James Bond vibe. Hammer's Kuryakin is an extremely tightly wound character, but he's balanced by Cavill's much more relaxed Solo, who insists on taking things easy even as he realizes that he's being drugged into a sleep that will see him waking on the chopping block. While the romantic subplot between Hammer and Vikander is a little bit forced, on the whole the film doesn't let the effort show beneath its cool veneer. I'm not a huge fan of director Guy Ritchie, but he pitches the story at just the right tone here and even takes a more moderate approach to his usual style, though even at its best it still sometimes feels like Tarantino-lite.

The Man from U.N.C.L.E. isn't one of summer 2015's high water marks for movies, but it's an enjoyable film that never wears out its welcome while you're watching it. It's apparent from the ending that it was envisioned as the "origin story" for a franchise, which likely won't happen given its poor box office performance so far and, really, probably doesn't need to happen. U.N.C.L.E. is fun as a stand alone piece, but I don't know that its casual approach could be effectively sustained over multiple films. It's sort of unfortunate that this movie is being released in 2015, because it guarantees that it's going to end up on the bad side of comparisons to the already released Mission: Impossible - Rogue Nation and the soon to be released Spectre, even though it's a perfectly serviceable and decent movie. A 2016 release date might have served it better, but hopefully it will find its audience somewhere.
Posted by Norma Desmond at 8:00 AM