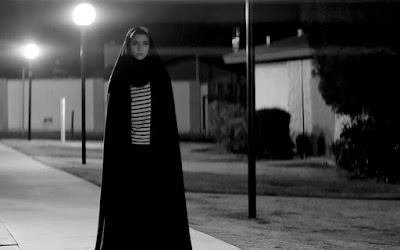 Described as "the first Iranian vampire western" (which is a weirdly specific descriptor, when you think about it), Ana Lily Amirpour's A Girl Walks Home Alone At Night is a delightful little curio. Light on plot (it's your basic boy meets girl, doesn't realize she's a vampire who stalks and kills people in his neighborhood every night story) and heavy on style, A Girl Walks Home Alone At Night is a wonderfully arty horror movie that makes the most of its limited resources, filling in whatever blanks it contains due to a low budget with plenty of atmosphere. While the film is ultimately a work that is light as air, it's also highly entertaining and suggests a great emerging talent in writer/director Amirpour.

A Girl Walks Home Alone At Night is set in a ghost town in Iran called Bad City and features a handful of characters: Arash (Arash Marandi), a young man whose prized possession is the car that he's worked and saved for years to buy and which is the one good thing in his life since the loss of his mother and his father, Hossein's (Marshall Manesh) descent into drug addiction; Saeed (Dominic Rains), a drug dealer and pimp; Atti (Mozhan Marno), a prostitute; Shaydah (Rome Shadanloo), a rich girl whose family Arash works for; and a young (and unnamed) street kid (Milad Eghbali). Appearing suddenly in their midst one night is a mysterious woman (Sheila Vand), who walks the streets by herself, but is not nearly as vulnerable as she may at first appear to be. Her first target is Saeed, who has recently taken possession of Arash's car as collateral against the drug debts that Hossein owes to him, and who invites her back to his apartment for drugs and sex. He gets more than he bargained for, however, when she reveals a pair of sharp teeth and then uses them to kill him in a gruesome fashion.

The method to the mystery woman's madness seems to be not just a hunger for blood, but a desire to punish those she sees as "bad" men. At least, her warning to the street kid to be a "good boy" suggests such motivation. After she kills Saeed, Arash finds the body and opts to steal the briefcase full of money and drugs on Saeed's coffee table, in addition to taking back the keys of his car. Unlike Saeed, however, Arash isn't a "bad" man and is perhaps the closest thing the story has to a "victim," at least as far as the male characters go. He's pushed around by Saeed, held hostage by his father's addiction, dismissed by Shaydah when she isn't toying with him, and above all stuck in the dying Bad City where there's no possible future for him, or anyone else for that matter. When his path crosses that of the mystery woman, his fate proves different from anyone else's - but arguably no less intense.

Beautifully shot in stark black and white, A Girl Walks Home Alone At Night is a mood piece more than anything and there's a hypnotic quality to it in terms of the way that it's shot, how it captures the characters moving, and the muted quality of the setting. Even in the absence of "The Girl," as Vand's character is credited, the suggestion of death hangs over Bad City, which is essentially a dead city where the streets are sparsely populated and everyone who remains seems to be in a state of waiting for the final blow. For those like Hossein, the presence of an actual vampire is hardly even necessary because his drug addiction (which takes the form of needle drugs) is already doing the work, but leeching the life from him in a much slower and more drawn out way. For a character like Arash, the vampire takes the form of everything that's keeping him trapped there - the dead-end job, the lack of opportunity to rise in the world, the father who is a drain on him financially and emotionally, the people around him who want only to "take" - and sapping his will to carry on. The Girl is merely the corporeal embodiment of what already existed in the city.

A Girl Walks Home Alone At Night is a slight work, both in terms of its plot and its ambition, but it's also an intriguing one in terms of its thematic content, particularly its depiction of gender, sex, and power. For example, The Girl is depicted wearing a chador, which is viewed by some as a symbol of oppression, when she's out in public (not that there's ever much "public" in the streets she haunts), and yet she is a physically and psychologically dominant presence who routinely takes control of her interactions with men (she's also the only female character in the film seen wearing that garment), so that she's taking power from men even as she's styled in a way which suggests feminine submission. The chador becomes the classic vampire cape (a fact underscored by a scene in which The Girl and Arash interact while he's wearing a Dracula costume) and becomes in its way a tool of empowerment, as The Girl is the only truly active agent in the narrative, where everyone else is reactive. Although it plays out on the small scale of a genre B movie, there are a lot of ideas at play in A Girl Walks Home Alone At Night, ideas which Amirpour will hopefully have an opportunity to explore more deeply in future projects.
Posted by Norma Desmond at 10:01 PM