Summer Not-Busters: A Million Ways to Die in the West (2014) 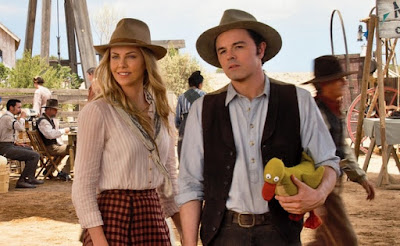 Generally speaking (as with everything, there can be exceptions), self-indulgence is a terrible quality in a filmmaker. Some filmmakers can get away with it either because their self-indulgence manages to actually add to the quality of a picture (Quentin Tarantino, for example), or because their stature and legacy is so solid and revered that it's difficult to argue that they haven't earned the right to do whatever they want to do (Martin Scorsese, for example). I can understand, fully, why studios let filmmakers like that get away with these things. I can't for the life of me understand why any studio would give Seth MacFarlane such leeway on the strength of one film which, while admittedly financially successful, also had the benefit of a premise more likely to attract audiences than the comedy western which MacFarlane would release as his follow up. While a $40 million budget is fairly modest for a Hollywood production these days, it's still a waste of money when the filmmaker doesn't actually do anything with it.

A Million Ways to Die in the West is set in 1882 but has its characters speak in a modern vernacular, which I suppose qualifies as its first joke. Its protagonist is sheep farmer Albert Stark (Seth MacFarlane), who gets dumped by his girlfriend Louise (Amanda Seyfried) after withdrawing from a gunfight and being branded a coward, and as a result is ready to pull up stakes in Old Stump and try his luck elsewhere. Before he can leave, however, he meets Anna (Charlize Theron) and is instantly drawn to her. Though Anna has ostensibly just arrived in town with her brother, Lewis (Evan Jones), she is in actual fact the wife of famous and much feared bandit Clinch Leatherwood (Liam Neeson) and Lewis is actually Clinch's right hand man. While Lewis is locked up for shooting a man during a saloon brawl, Anna and Albert get to know each other and she decides to train him after he impulsively challenges Louise's new beau, Foy (Neil Patrick Harris), to a duel. Albert finds that Anna is uncommonly good at shooting for the kind of person she's supposed to be, and the time that they spend together leads to him falling for her and deciding to walk away from the duel because he no longer cares to impress Louise. However, as soon as he does that, he learns that Anna is married to Clinch, who has been informed that she's been seen kissing a man in town and vows to kill that man, leaving Albert feeling betrayed and forcing him to go on he run before he finds his courage and faces down the outlaw.

There are many deaths in A Million Ways to Die in the West - from getting crushed by a giant block of ice, to being gored by a bull, to being shot in the saloon - and many descriptions of ways people could die in the old west, but there's definitely not a million unless you count all the viewers likely to die of boredom while watching it. Despite the plot summary I've provided above, A Million Ways to Die in the West doesn't actually have a plot, or at least it doesn't act like it does. It has a set up and it has a resolution and it has a lot of meandering nothing in between. The film is made up primarily of scenes of MacFarlane and Theron just hanging out, punctuated by sex jokes, race jokes, and shit jokes (literally, and including an extended sequence centered around one character's unfortunately timed, and increasingly desperate, need to relieve himself), until finally MacFarlane remembers that way, waaaaay back at the beginning of the movie Clinch was introduced and that he needs to be brought back in order to provide conflict to the central romantic relationship and then provide the story with resolution. As a narrative, A Million Ways to the Die in the West is so slight and inconsequential that it could be knocked over with the smallest of breezes, and yet this movie still manages to clock in at 2 hours. Why? Whyyyyyy would anyone let this movie be that long?

Of course, the length of the film might not seem quite so interminable if the content were actually funny, but there aren't many laughs to be had in A Million Ways to Die in the West. Anything remotely funny made it into the trailers, and given that trailers are usually 2 to 4 minutes long, you can imagine how few and far between the laughs actually are when the entire movie is 2 hours. MacFarlane's humor, which to give credit where it's due can sometimes hit the target (I'm speaking to his work generally, not just specifically to this film), is typically fairly lazy, relying as it does on "shock" laughs (meaning laughs that derive less from something being funny than from the surprise of it) that come, for example, from saying something racist but doing it with a wink so that it plays as "[racist thing], just kidding!" which apparently makes something "edgy" rather than just gross and offensive; or on "randomness," of something being inherently funny simply for being a non-sequitur or for the fact that it happens unexpectedly and for no real reason like, for example, Ryan Reynolds showing up only to be shot to death by Neeson within 5 seconds. Randomness can be funny, but when it occurs multiple times in just about every scene, the effect starts to wear pretty thin, and A Million Ways to Die in the West has absolutely no sense of restraint so that even the things that are funny at first end up being completely beaten into the ground by the time that it finally reaches its conclusion.

As the star, director, co-writer, and a producer of the film, a lot of its failings fall at MacFarlane's feet, but you also have to reserve some of the blame for the studio for indulging him so much on the strength of one hit film, and for apparently not having anyone on hand to rein him in a little bit to ensure that the follow-up was not such a shapeless mess. After all, since westerns haven't exactly burned up the box office with any regularity since the end of the 1960s, it's not as if the film could count on the contemporary audience's affection for the genre to carry the day; this film needed a firm hand to sweep away the nonsense and shape it into something tightly focused and engaging. If that had happened, A Million Ways to the Die the West might actually have become a decent movie. It certainly starts out with some degree of promise, as MacFarlane's affection for the genre is apparent in the establishing shots which open the film and which have the look and feel of a classic western, demonstrating that as a director he definitely has an eye for evocative shots. But it quickly falls apart after that, becoming little more than a showcase for MacFarlane to romance Seyfried and Theron (the perks, I suppose, of being a producer/writer/director/star on a film) while trying to wring laughs out of repetitious, crass humor, shock value race humor, and the "joke" that the characters are, essentially, modern people who speak, behave, and have 2014 points of reference but dress in old west fashions (and that is the entirety of the joke; it's not that they're saying anything particularly funny, it's that they're talking in one way while styled in a way that makes that seem anachronistic). A Million Ways to Die in the West just smacks of indolence, of MacFarlane and friends being given $40 million to amuse themselves with on the gamble that anything that came out of it could make a profit as long as the marketing emphasized that it was from the makers of Ted. But A Million Ways to Die in the West is no Ted - and I say that as someone whose reaction to Ted could generously be described as "mixed."


Should It Have Been a Blockbuster?: To be frank, I'm not even sure this actually qualifies as a movie
Posted by Norma Desmond at 8:00 AM