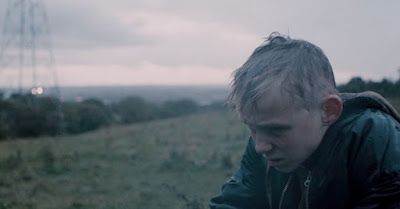 Movies like Clio Barnard’s The Selfish Giant are a rarity and a treasure. It is a very bleak and very emotionally raw and intense film, but it is also one which brims with life and vitality. That’s largely due to Barnard’s steady hand and strong vision as a storyteller, which makes this actually quite tragic story about two boys caught in the cycle of poverty and violence so incredibly engaging and sometimes so funny, but it’s also due to the extraordinary and charismatic performance by young Conner Chapman in the leading role. Assuming that he continues acting, years from now The Selfish Giant is a film that will be pointed to as the moment when a star was born.

The Selfish Giant is about Arbor (Chapman) and Swifty (Shaun Thomas), two 13 year old boys who live on the edge of societal oblivion. Arbor lives with his single mother, who is at her wit’s end because of Arbor’s behavioral problems and the drug addiction issues of his older brother, who is always stealing Arbor’s hyperactivity medication for his own use and to sell, and who is constantly getting himself into drug debts which result in attacks on the family home. Swifty’s family, meanwhile, consists of countless siblings, a father who is always screaming abuse, and a meek mother who desperately wants Swifty to complete his education in the hope that he might raise himself to a better kind of life. Both homes are characterized by a lack of money and a sense of that everyday might be the day when the unsteady structure of the family finally topples over. When Swifty and Arbor get expelled from school for fighting with classmates, Arbor comes up with a plan for them to make a bit of money by collecting scrap metal and selling it to local dealer Kitten (Sean Gilder). However, Arbor’s impulsive nature leads him to make a decision which results in him getting on Kitten’s bad side and being forced to undertake a dangerous task in order to get out of this new trouble. Although a rift has developed between Arbor and Swifty as a result of the latter abandoning the scrap metal scheme in order to try his hand at harness racing, Swifty lends a hand to Arbor, as he knows the task he has to complete is dangerous, though neither truly grasps how reckless it really is until it's too late.

Filmed in a direct, and sometimes stark and spare style, The Selfish Giant explores the dire circumstances of its protagonists in a way that doesn’t sensationalize or editorialize, but feels very matter-of-fact. It isn't sermonizing, it is observing and sketching a portrait not often seen in pop culture of the kind of hand-to-mouth existence that people on the fringes lead, and the way that society is ordered to keep those people from escaping into better circumstances. However, though the film uses the reality of how difficult upward mobility is from the bottom rungs as its frame of reference and root of its story, it is ultimately less interested in the general socio-economic politics and cyclical nature of poverty than it is in exploring the specifics of these two characters and what their lives are like. In many respects, this is an unpleasant and depressing film because the options available to Arbor and Swifty are all essentially dead ends and because the circumstances of their births determined the limits of the options available to them. At the same time, though, this is such an engrossing film that you can’t look away even in its most brutal sections.

The first time I saw The Selfish Giant, I was struck by its emotional rawness and by its unflinching portrayal of the desperate straits of its two protagonists. On recent rewatch what struck me was that, while the film is very much about Arbor and Swifty first, beneath that primary layer of narrative is one that is about their mothers, two women at the end of their respective ropes, struggling to get their sons from one day to the next without support or assistance. Neither of these women has the tools or the help they need, and in many ways the system is stacked against their success (when Arbor is expelled from school, his exasperated mother asks what she’s supposed to do if they won’t teach him, and the administrator responds with what basically amounts to a shrug); all they really have are each other, capable of offering comfort but ultimately unable to “fix” anything. All they want is for the kids to have a life that is marginally better than the ones that they’ve become stuck in, and that that should be so impossibly out of reach is heartbreaking. While The Selfish Giant is by no means a “hopeful” movie, it’s so rich and so rewarding a film for its lived-in feel that it doesn’t matter. It is easily one of the great films of this still young century.
Posted by Norma Desmond at 8:51 PM