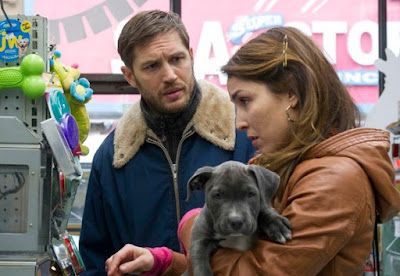 Well constructed though it may be, the problem with a film like The Drop is that if you've seen one example of its kind, you've seen them all. It's dark, it's gritty, and it's marked by the specificity of its location, where everyone in a particular neighborhood is connected in some way to organized crime, the potential for violence lurks behind every word and action, problems are dealt with "in house," and no one ever talks to the cops. Some of the particulars might change, depending on the geographical area of the setting and the cultural background of the protagonist, but it's always sort of the same: a guy with a past who's trying to lay low and keep out of what's going on around him, but ends up being drawn into it either because of a girl or because a relative has made a potentially fatal misstep, or both, and finds himself in the position of having to do clean up to ensure that things don't go from bad to worse, and has to do it before the cop that's been sniffing around puts the pieces together himself. It's formula, which isn't in and of itself a bad thing, but in the case of The Drop it would be helpful if it unfolded with a little more energy, because for a film that turns on several acts of violence, it's strangely bloodless. Cute dog, though.

Set in Brooklyn, The Drop turns on Bob Saginowski (Tom Hardy), a bartender at a neighborhood joint called "Cousin Marv's," once owned by his cousin, Marv (James Gandolfini), though it has long since come into possession of Chechen mobsters and become a "drop bar" for money laundering. As the film opens, two events occur in fairly quick succession which threaten to turn Bob's relatively quiet life upside down. The first is him finding a badly beaten pit bull puppy when he's walking home, which leads to him meeting Nadia (Noomi Rapace), who helps him learn how to take care of the dog, but comes with a jealous ex-boyfriend, Eric (Matthias Schoenaerts), who is rumored to have been behind a local and officially unsolved murder 10 years earlier. Eric refuses to accept that Nadia no longer wants to be with him and tries to intimidate both her and Bob, and claims that the dog Bob found actually belongs to him and that he has the paperwork to prove it. When Eric threatens to go to the police and tell them Bob stole the dog, and implies that once he gets it back he'll kill it just to spite Bob and Nadia, Bob is left in the position of having to come up with the $10,000 payoff that Eric is demanding.

The second event is the robbery of the bar by two masked men with guns, and the assault of one of the bartenders necessitating the assistance of paramedics. When the police arrive and start asking questions, Bob gives away a little too much information about the robbers, leaving both Marv and, later, the Chechens, questioning why he would say so much. The Chechens tell them to get back the money that's been stolen, but Marv, who was actually in league with the two robbers, has other plans and sets his sights on a bigger score so that he can put together the money he owes for his ailing father's healthcare treatments. However, when one of the robbers ends up dead as a result of the details that Bob provided to both the police and the Chechens, Marv finds himself entering into an ill-advised partnership with someone he can't (or shouldn't) rely on, and banking everything on a plot which, if just one thing goes wrong, will surely get him killed. Meanwhile, the police officer (John Ortiz) who's been investigating the robbery begins connecting a lot of dots, which could result in him solving more than one crime.

Although it runs at a perfectly reasonable running time of 106 minutes, The Drop unfolds at an unfortunately sluggish pace which allows a lot of the narrative's dramatic tension to drain out. The slow pace sort of works with respect to the part of the story concerned with Bob's budding relationship with Nadia, insofar as the characters are both depicted as being people with scars (physical and psychological) and experiences which make it difficult for them to open up to others, but the pacing is a drag on the other half of the story, which requires a greater sense of urgency in order to be effective. Like Bob himself, the film is just a little bit too calm and, also like Bob, even when it reaches its "big" moment (which naturally comes with a burst of violence), it does so without any particular sense of excitement. This laidback treatment of violence is only underscored by the film's two final scenes, where first one character and then another, on discovering Bob's true colors, responds with little more than a shrug. Like all milieus depicted in films like this one, The Drop's setting is one where only the strong survive and everyone in the film is so jaded by that reality that they treat is as just a matter of course.

The Drop is probably most notable for being the final feature film performance from Gandolfini, and his performance here is dependably solid. While his performance isn't any less quiet than that of Hardy, it's a bit nervier and more emotional, which makes it slightly more engaging. This isn't to say that Hardy's performance is bad - I don't think I've ever seen a bad performance from Hardy - but it doesn't offer any particular surprises; it's the prototypical stoic, man of few words type of role. This really isn't Hardy's fault, as there's not really anything in The Drop that's much of a surprise at all, with the whole thing unfolding with the inescapable feeling that you've seen it all before. The Drop isn't a bad movie by any stretch, but there's ultimately nothing really special about it apart from the aforementioned fact of it being Gandolfini's last film.
Posted by Norma Desmond at 8:00 AM

I enjoyed this one a bit more than you. I really liked Hardy's work and didn't feel like the movie dragged, either. It probably helps that I'm more of a sucker for the particular formula this follows. You described it perfectly, by the way. Still, I found it good, not great.