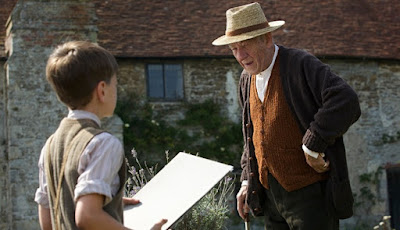 Sherlock Holmes has existed in popular culture for 128 years now, his name now synonymous with crime solving. Using his sharp observational skills and his wits, there isn't a case he isn't capable of solving, a foe he isn't capable of taking down. But no one is indestructible and time takes its toll on everyone, and in Bill Condon's Mr. Holmes the great detective is a shadow of himself, reduced physically and mentally by the effects of aging. As played by Ian McKellen, he remains a thoroughly compelling character and is perhaps even more so than usual in this compassionate, character-driven drama. While it doesn't have the big action thrills of the Robert Downey, Jr. franchise, Mr. Holmes is a solid and absorbing drama.

Set in 1947, Mr. Holmes finds the detective long settled into retirement at a Sussex farmhouse where he lives with his housekeeper, Mrs. Munro (Laura Linney), and her son, Roger (Milo Parker). As the film opens, Holmes has just returned from a trip to Hiroshima to retrieve a jelly made from a plant which he hopes will help improve his memory and allow him to recall the details of his final case, which has come to haunt him. He knows that the version of events as recounted in the story by his former partner Dr. Watson is incorrect, but as he tries to write his own account to correct the inaccuracies of the other, he finds that the details have become vague over time. On returning, he realizes that during his absence someone went into his study and read the unfinished manuscript of his story and quickly deduces that it was Roger, but rather than getting mad at any invasion of privacy, he finds that discussing the case with the boy helps clarify some of the facts. Though Roger's mother discourages him from getting too close to Holmes, who she anticipates will not be her employer for much longer as age will soon necessitate his removal from the home into a nursing home, Roger embarks on a friendship with the detective as they discuss the case and the older man schools him in the art of beekeeping.

In flashbacks to some thirty years earlier, the case in question unfolds in accordance with what Holmes can recall. He was engaged by Thomas Kelmot (Patrick Kennedy) to investigate his wife, Ann (Hattie Morahan), who had become depressed after suffering two miscarriages and then, Thomas believes, fell under the sway of a music teacher. Holmes spends a day following Ann through London and the clues begin pointing to a woman bitterly angry at her husband's dismissal of her grief and refusal to buy headstones for the two lost babies as, to his mind, they weren't really children as they were never born. While it appears that Ann may be plotting revenge and putting her ducks in order so that she can murder Thomas, Holmes has a nagging suspicion that he's missing something - both in the past and in the present. As he reconstructs the events in his memory, he becomes increasingly convinced that he faltered in some way in the past, letting those who needed him down in such a way that it drove him from his profession and forced him into a kind of exile.

Adapted from the novel A Slight Trick of the Mind by Mitch Cullin, Mr. Holmes has a story which gets its start with a mystery but it isn't properly described as a mystery story. The puzzle is fairly easily solved (back in the day Holmes managed it in a matter of hours) and the picture, once all the pieces are in place, is straightforward and not particularly complicated. What drives the story is Holmes' struggle in his present day scenes as his mind, once so sharp and unflagging, fails him, leaving huge gaps in his memories and leaving him confused as he attempts to go about his day to day life; as well as his realization that despite the mental acuity he once possessed, his emotional intelligence has always been lacking. Mr. Holmes is very much a character driven film that's more concerned with what it means for Holmes to not be able to recall the details of the case than it is with the case itself.

As Holmes, McKellen delivers an excellent performance that strips away the mystique of his famous character and renders him almost shockingly vulnerable. As played by McKellen, Holmes often seems both physically and mentally fragile, his speech full of starts and stops as he slips in and out of his train of thought, his demeanor when he's alone alternating between frustration at his inability to remember and fear that he'll never be able to overcome it. In a supporting role as his housekeeper, Linney gets a lot less to do and her character is a little underwritten, however, she does get a few moments to showcase what a terrific actress she is and how she can be all the more powerful for how understated she is. Both McKellen and Linney work well with young Milo Parker, who manages to fall just on the right side of precociousness where child actors are concerned, engaging with him in a way that helps draw the best out of him and gives the relationships that Roger has with his mother and with Holmes a ring of authenticity. While Mr. Holmes ends on a note which is arguably a little too heartwarming and huggy to be really believable, on the whole the film is a compelling story about a man in his twilight years trying his hardest to reconcile himself to his regrets and failures.
Posted by Norma Desmond at 8:00 AM