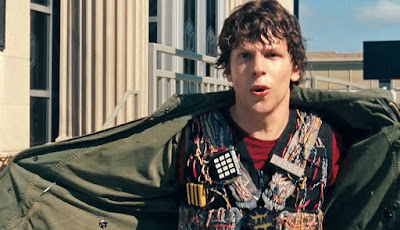 There are plenty of movies that leave you wondering how they ever got made, they're so ill-conceived and poorly rendered. Somewhat less common are movies that leave you wondering why they got made, as everyone in it seems so disengaged from and disinterested in the material. I mean, I can speculate as to why each of the principal actors showed up for this - Jesse Eisenberg to reteam with his Zombieland director Ruben Fleisher, Aziz Ansari because it's not like Hollywood makes a ton of roles available to actors of color, Danny McBride because the character he plays is basically the "Danny McBride character" so why not?, and Nick Swardson because the character he plays here is marginally less grotesque than the ones he usually gets to play in Happy Madison productions so this must have been a nice change of pace - but that still doesn't explain why anyone paid to make it happen. Even if 30 Minutes of Less didn't have strong similarities to a real life incident that ended tragically, this would be an oddly joyless comedy, and one that doesn't even seem to know what its actual story is, let alone what tone it ought to be aiming for.

"30 minutes or less" is the policy of the pizza delivery place where Nick (Jesse Eisenberg) works as a delivery driver, though he rarely if ever meets the delivery time requirement despite how fast and recklessly he drives. Nick is a slacker who has failed to live up to his potential (though what, exactly, he has the potential to be if he applied himself isn't really clear) and is on the verge of losing Kate (Dilshad Vadsaria), the girl that he's in love with but who is not his girlfriend, when she announces that she's moving on to Atlanta for a job opportunity, and then loses his best friend, Chet (Aziz Ansari), who is Kate's twin brother, when he reveals that he not only slept with Kate years earlier when the three of them graduated high school, but that he also regaled Chet with the details under the guise of telling him about an experience with a different girl. Things somehow manage to get worse for Nick when he goes out to make a delivery to the middle of nowhere and finds himself confronted by two guys wearing monkey masks who then knock him out. When he comes to, they reveal that they've strapped a bomb to his chest and that he has 12 hours to come up with $100k or they'll detonate the bomb. Deciding that the only way to accomplish the task is to rob a bank, as the two captors have suggested, Nick enlists Chet's help and they go about the most haphazard bank robbery plot imaginable.

The two "masterminds" of the crisis are Dwayne (Danny McBride) and Travis (Nick Swardson), the former of whom has delusions of grandeur built around the notion that one day he'll inherit the millions that his father has won in the lottery, assuming the old man doesn't manage to spend it all before he dies. When he casually mentions his future windfall while getting a lapdance, the stripper suggests that, for a price, she could help arrange to have Dwayne's father killed. Thinking that this is just the thing he needs to launch his dream project - a tanning salon/prostitution ring - but not wanting to get his hands dirty doing whatever needs to be done to put together the $100k that the hitman (Michael Pena) demands to do the job, Dwayne and Travis brainstorm (and I use that term loosely) ways to get a patsy to do it for them. After Travis reveals that he could make a bomb that could be locked to its wearer and detonated remotely, Dwayne hits on the idea of luring a pizza guy into a trap and forcing him into the job after seeing an add for the restaurant where Nick works. They think they've got a foolproof plan that will put them on easy street, but once the plot gets underway Travis realizes that Dwayne is willing to go a lot father than he is to pull it off, and Dwayne realizes that he isn't quite the criminal genius that he thought he was.

30 Minutes or Less is meant to be a comedy, but it's not a particularly funny one even by the standards of dark comedy. I laughed exactly once, and that was when Dwayne and Travis were trying to think of ways they could blackmail someone into getting $100k for them, and Dwayne spins a grandiose tale of how he could seduce a housewife into engaging in a series of degrading sex acts with him which will culminate with the involvement of several neighborhood teenage boys and which he will capture on video and then use to blackmail her husband, and Travis dryly responds that it may be difficult to find a woman "that gross" on such short notice. Generally speaking, the film unfolds as if not quite sure whether it's supposed to be treating any given scene as funny or tragic, something that becomes particularly problematic in its final act when it decides to leave the fates of several characters ambiguous, I guess because it's difficult to be a comedy when just about everyone dies (though Heathers pulled it off). This tonal confusion might be the result of the story's similarities to a real incident which ended with the pizza guy being killed by the bomb (though the film isn't officially based on that incident), which of course makes it difficult to make light of the premise, but it seems to me that you should figure out a way to crack that code before sinking tens of millions of dollars into a movie, otherwise what's the point?

30 Minutes or Less can't decide what sort of movie it wants to be, or even what it ultimately wants to accomplish on a narrative level. I've already mentioned that most characters go out on an ambiguous note, but it actually feels like more thought went into those decisions than into how to bring Nick and Chet's story to a conclusion. Even if you could suspend disbelief enough to buy that Nick and Chet get away with the bank robbery - and that involves ignoring so many bits of logic and common sense that I'm not even sure that Dwayne and Travis could manage it, given that Nick and Chet: would have been caught on a store security camera buying ski masks and fake guns, steal a car belonging to a family friend for use in the getaway and proceed to get their fingerprints all over it, a cop intercepts them and sees their faces (before running off when Nick shows him the bomb), and the bills they steal are likely marked, given that they also come with a dye pack - they've only stolen $100k, or $50k each, yet celebrate like they're now on easy street. $50k is a lot of money, but it's not live out the rest of your days at leisure money, particularly if you're only in your mid-20s. It's a weird ending that really makes no sense if you think about it for even a fraction of a second, and contributes greatly to the "slapped together" feel of the movie as a whole. There may have been a way to make a decent comedy out of this premise, but this wasn't it.
Posted by Norma Desmond at 8:00 AM

Didn't hate this one quite as much as you, but yeah, it wasn't good.

Hard to believe this was Eisenberg's follow up to The Social Network. Highest of highs to the lowest of lows.