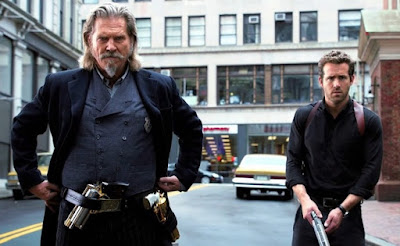 "You know what the difference is between you and me? I make this look good." Within Men in Black, this is a line that Will Smith utters to Tommy Lee Jones, but it's also effective as an assessment of R.I.P.D.'s fairly shameless borrowing from the 1997 blockbuster. Men in Black worked and it was good enough to become the second highest grossing film of 1997, while R.I.P.D. is very, very bad and managed to gross an amount $100 million dollars short of its production budget. Maybe if Ryan Reynolds had sung a catchy title song to attach to R.I.P.D. things would have been different, but I doubt it. I don't know where that production budget of $130 million went, but you sure can't see it on screen as R.I.P.D. looks terrible and amateurish from beginning to end.

Reynolds stars as Nick, a detective with the Boston Police Department who before the film begins enters into a plot with his partner, Bobby (Kevin Bacon), to steal some gold that they found at a crime scene. He rationalizes his actions by telling himself that he's just trying to provide a better life for himself and his wife, Julia (Stephanie Szostak), but his conscience quickly gets the better of him and he backs out of the deal, which ultimately leads to Bobby taking the opportunity to eliminate him during a raid in order to keep him from ratting. In death, his soul is sucked up into the afterlife and brought to the Rest In Peace Department, where Chief Proctor (Mary Louise Parker) offers him the opportunity to become an afterlife police officer whose job will be finding "deados" on Earth who are masquerading as living humans, and in one of the film's few good lines points out that "dirty cop is one of the higher shot in the face percentage jobs" so he should stop being so surprised that he's dead. Nick is teamed up with Roy (Jeff Bridges), a former wild west US Marshall who prefers to do things on his own and would rather not have to school a newbie in the job. On getting back to Earth, Nick's instinct of course is to reach out to Julia, however, as he's dead, he appears in a form different from his own to the living, so what Julia sees is an old Chinese man rather than her husband (Roy, meanwhile, appears to the living as a blonde model). While they don't work well together at first, eventually Nick and Roy bond as they uncover a plot by the deados to construct an ancient device which will reverse the flow of souls between the Earth and the afterlife, leaving the planet overrun with the dead, a plot which connects to Bobby and to the circumstances of Nick's untimely death.

R.I.P.D. fails in a number of ways, but it's impossible not to start with its terrible effects work. Within the mythology of the film, the dead who remain on earth posing as the living are monsters beneath the costume of humanity that they wear, and their transformation is triggered by spicy smells which find their human forms basically cracking open, expanding, revealing extra or missing limbs, and turning into grotesqueries. They are meant to look gross, but holy hell do they have to look so cartoonishly bad? It's not as if realism is expected in a film like this, which is a mishmash of science fiction, comedy, and buddy-cop action, but at a cost of $130 million, I don't think it's too much to expect that it wouldn't look so slapped together and cheap. The effects in R.I.P.D. are so bad that at times you may actually find yourself wondering if they're bad on purpose, just as you may wonder if the off-kilter camera angles are a deliberate artistic choice (an homage, perhaps, to The Third Man?), or simply the effect of the camera operator just giving up and letting the camera fall over.

Nothing can save R.I.P.D. Reynolds is stuck in the charmless role of the straight man, hindered on all sides by the fact that the other major characters in the film are more interesting than his own. This isn't to say that any of the other characters are any less one note than his happens to be, just that those notes are at least slightly more interesting than his stoic good guy who just wants a chance to right the one wrong he ever committed. Bridges brings a little bit of life to the proceedings as Roy, though this feels less like a genuine performance and more like Bridges doing an impression of someone doing an impression of Jeff Bridges as Rooster Cogburn, while Bacon is effectively slimy as the villain who is so obviously the villain from the first moment he appears on screen that it will make you question how Reynolds' character could ever make detective without noticing it. The women in the film fare worse, though their roles are so small it seems generous to qualify them as supporting. Szostak is stuck with your run of the mill damsel in distress role, and Parker, though she puts a sharp spin on a few lines, is playing a character whose sole function, really, is to fill in the blanks with exposition (not that it helps, more on that in a moment) and has to fight against the bizarre decision that her character should be romantically fixated on Roy to the point that eventually her purpose on screen stops being that she's in charge of the Boston RIPD precinct and starts being simply to make a point (over and over) that she's interested in Roy and frustrated by his lack of reciprocation.

So about that exposition... R.I.P.D. is adapted from a comic book by Peter M. Lenkov, and while I have no idea whether the source material does a decent job at world building, the film certainly falls way short in that department. While it's generally pointless to overthink even a good film of this type, I ended up with more questions than answers as the film came to an end. It's explained that the deados remain on Earth as a result of "slipping through the cracks" but how does that work exactly? How does one avoid being sucked up into the after life as Nick was, and if they do, how do they manage to hide the fact that they've just died if their death was witnessed by someone? Bobby, for example, explains that he died on the job but... no one noticed? And he just got up and carried on? And he understood exactly what had happened? More importantly, if Bobby is dead, and Nick and Roy's avatars are there to disguise them from the living, then why does Bobby see them as their avatars rather than their real selves? And if the avatars are, by design, meant to allow the RIPD officers to go through the world in an inconspicuous fashion so that they aren't noticed, then why is Roy a tall, leggy model whose cleavage is always on display? Why is Roy there at all, in fact, if every city has its own RIPD precinct made up of cops from that particular city? Roy is from the west and died sometime after the Civil War and describes a post-death experience in which his body was picked apart by coyotes and then dragged into a cave. This happened in late 19th century Boston? And, arguably the most important question, what is the deal with Roy's hat? He has one, his avatar doesn't, at one point he loses his hat and it's like a really big deal and results in him spending the rest of the movie trying on hats to replace it, but if the hat isn't actually real (again: the avatar is never wearing a hat), how can it get lost? You know what? I'm done.


Should It Have Been a Blockbuster?: Not even if it had been released attached to Men in Black
Posted by Norma Desmond at 6:33 PM