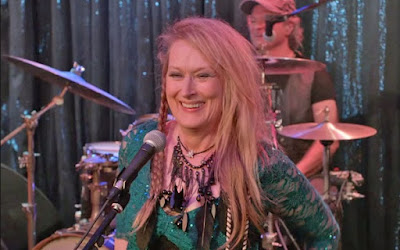 To rate a movie like Ricki and the Flash is to consider it on a special scale. Fact is, you don't really see a movie like this for the story, which you can safely assume will follow a fairly familiar trajectory (and in the very particular case of this film, the trailer pretty guaranteed that it would do just that), and which promises you nothing more than that. You see a movie like Ricki and the Flash to see Meryl Streep as a rock singer. The story around that is basically secondary, especially if it's going to be a perfunctory family drama. As written by Diablo Cody and directed by Jonathan Demme, Ricki and the Flash does offer a couple of minor surprises, but ultimately the film is exactly what you expect it to be. And that's okay.

Streep stars as Ricki Rendazzo, legally Linda Brummel, by night the leader of the house band of a small Los Angeles club, and by day a cashier at a grocery store. Years ago she left her husband, Pete (Kevin Kline), and their three children behind in Indiana in order to move to California and pursue her dream of becoming a successful musician, and though she was able to get one album to her credit, she's now toiling in obscurity and has just filed for bankruptcy. Her connection to the family is now tenuous at best and when she gets a series of phone calls from Pete, she ignores them at first and is only compelled to finally answer as a result of his unrelenting persistence, whereupon he informs her that their daughter, Julie (Mamie Gummer), is in a bad way as a result of her husband leaving her for another woman. Told that she's needed there, Ricki scrapes together enough money to buy a plane ticket and heads to Indiana with her guitar in tow.

The reception she receives when she arrives is not a warm one. She's effectively been absent from her children's lives since they were pre-teens and they've been raised by Pete and his second wife, Maureen (Audra McDonald). Oldest son Adam (Nick Westrate), is gay and openly disdainful of her for her narrow-minded political views; younger son Josh (Sebastian Stan) is engaged but has gone out of his way to keep it a secret so that he can get away with not inviting her to the wedding; and Julie is a mess of depression and rage who comes to focus much of her anger on Ricki as the easiest and most convenient target. Ricki struggles to connect with them, feeling insecure about Maureen's much more traditional, and far more appreciated, mothering style, and defensive about her own shortcomings in that department. Although she gives it a shot in her own way, she knows that her role has been taken over by someone else and that she's out of place, and she longs to return to the life she knows, to the familiar faces who come to the bar every night to hear her play, and the bandmate (Rick Springfield) who is almost, sort of, her boyfriend. However, just as her current life in California makes it almost impossible for her to reclaim the parts of her life that are still in Indiana, her past in Indiana makes it almost impossible for her to truly get on with her life in California.

Ricki and the Flash builds itself on some tried and true tropes - the family member returning to the fold after a long absence, the Family with Issues - but it also makes some interesting decisions, particularly in its depiction of its protagonist. So often in Hollywood films, particularly in lighter fare such as this, narratives go out of their way to make their female protagonists as likable and easy to relate to as possible, but with Ricki, Cody takes a cue from her woefully underappreciated Young Adult and presents us with a woman that you're not really supposed to like, someone you might sympathize with on occasion, but who is difficult and complicated and does and says things that the film doesn't try to justify or soften. While the film, and its protagonist, make the point that more is expected culturally of women as mothers than men as fathers - society views fatherhood as something men "do," and motherhood as something women "are" - and that a man who did the same thing that Ricki did might be viewed as a "disappointment" without necessarily being seen as a "villain," the film doesn't exactly let Ricki off the hook either. She's a selfish person who abdicated her responsibilities, but still wants to have the status she feels is owing to her as a mother (one of the film's funniest lines is when Ricki's boyfriend assures her that she's "a good mom" simply because she flew to Indiana, as if showing up once in a couple of decades is all it takes) and bristles at the respect shown to Maureen, who wastes no time in pointing out that she's the one who's actually been there (it's one of the film's short comings that Maureen isn't more of an actual person, but McDonald still plays the hell out of her few scenes). The film has no fear of showing her as a deeply flawed human being, and that in and of itself is fairly refreshing.

The conception and depiction of Ricki as a character is also interesting for the way that it steers away from expectations. As a woman who abandons the "traditional" in favor of pursuing an artistic aspiration, you might expect Ricki to be a liberal leaning and open-minded person, yet she's a political conservative whose dislike of Barack Obama has a specific racial tinge to it, and who voted for George W. Bush twice because she bought into the rhetoric that doing so was the only way to "support the troops" (this aspect has its own added dimension of complexity to it, revealed in what seems at first to be just a throw away line). She's the sort of person who says the exact wrong things to her gay son (using words like "choice," for example), and the kind of white person who makes other white people feel embarrassed when she tells a man of Asian descent that he looks "just like" Bruce Lee. It's a very different sort of role for Streep, who more often than not plays women who are polished and intelligent, but this isn't to say that Ricki is without good qualities. She wants to do right by the people she loves, but doesn't always have the skills or the ability to do it, and that's crucial to making the film's ending work (though I'm not sure it does fully work). This isn't to say that by the end everything has changed for the better or that Ricki becomes a different person or that the hurts of past are neatly resolved, but the film finds a way to have the soft ending that the genre requires while still edging it slightly. Ricki might not fit in with the dynamic that the family has developed, but for one night at least she can share in the family experience. Ricki and the Flash is not a major work by any means, but as a light, end of summer entertainment, it's a solid enough piece of work.
Posted by Norma Desmond at 8:00 AM

The August release date should honestly tell you everything you need to know about Ricki and the Flash.

I don't know about that. Guardians of the Galaxy had an August release date, too.