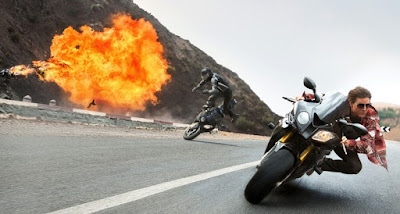 Mission: Impossible - Rogue Nation is everything a summer movie ought to be. It's action packed, light on its feet (despite a somewhat convoluted plot), and has a sense of humor even as it takes itself, and its narrative stakes, seriously. It's a great entertainment and, even though it is the fifth entry in its series, it's easily accessible even if you haven't seen all (or any) of the previous entries. It's a film that does just about everything right, and does it in a way that's sleek and exciting and also has a classical kind of feel to it. While star Tom Cruise's career over the last ten years feels like it has seen more misses than hits, Rogue Nation is proof that you can never quite count him out as a movie star.

Rogue Nation finds super spy Ethan Hunt (Cruise) in London and falling into a trap laid by a shadow organization called the Syndicate, headed up by Solomon Lane (Sean Harris), which Hunt has spent a year trying to prove exists and is the connecting tissue behind various terrorist attacks around the world. After being rescued from torture at the hands of the "Bone Doctor" (Jens Hulten) by one of the Syndicate's own agents, Ilsa Faust (Rebecca Ferguson), Hunt is forced to disappear and go on the run as a result of a Senate committee shutting down his organization, the IMF, on the advice of CIA director Hunley (Alec Baldwin), and re-allocating its resources and personnel to Hunley's control. While Hunt's friends Brandt (Jeremy Renner), Benji (Simon Pegg), and Luther (Ving Rhames) try to lay low, the CIA searches the world for Hunt. Eventually Benji is unwittingly recruited to go to Vienna to help Hunt in his attempt to catch Lane and prove the existence of the Syndicate, but things go awry when Ilsa shows up and once again muddies the waters by alternately trying to hinder and help Hunt.

As in London, Ilsa once again slips away from Hunt in Vienna, but he and Benji are able to track her to Morocco, where the three team up to break into a power station in order to retrieve a ledger which contains the names of all the Syndicate's agents. The task is "impossible" because it requires Benji to go through the station's regular security under the guise of having clearance, which means that not only do they have to replicate a security card, but Benji will also have to pass a finger print scan, crack three safe locks, and then fool a gait scanner which has been programmed to memorize the body of the person Benji is pretending to be and the way that he moves. In order to pull that off, Hunt and Ilsa need to switch out the security memory card located under the power station, which requires Hunt to go underwater without an oxygen tank for the three minutes that will be required to complete all the steps. However, even if they manage to pull all of that off, there will still remain the question of where Ilsa's loyalties lie, what Lane's ultimate plot is, and whether Hunt can stop that plot before the CIA catches up with him and eliminates him from the equation.

The screenplay (which was written by director Christopher McQuarrie) turns on a lot of back and forth regarding who each character is truly allied to. The ease with which Ilsa switches from foe to friend to foe again almost becomes a joke by the end, but even though she seems to be in a constant state of flux between saving Hunt and putting him in danger, the character never really seems inconsistent. There is an internal logic to what she's doing and why, and though the film does at times fall back on the traditional tropes regarding "the girl" in spy movies (meaning the film finds a way to get her half naked multiple times), it also allows her to be pretty kick ass and makes her Hunt's equal in terms of capability. There isn't a ton of competition in terms of good female characters in summer action movies, but Ilsa is the best from this summer not named "Furiosa." Also, though timing makes it impossible, the frequency with which Rogue Nation makes a point of having her remove her impossibly high heels whenever action is required certainly feels like a rebuke to Bryce Dallas Howard's running in heels from one end of Jurassic World to the other. The Ilsa character has agency and purpose and can take care of herself in tough situations, and Ferugson is an excellent addition to the Mission: Impossible team assuming that she returns for the next entry.

In among the twisting and turning narrative, and the give and take between Hunt and Ilsa, Rogue Nation also offers a lot of spectacle for your money. The sequence which finds Hunt (and Cruise) hanging off the side of a plane while it's taking off happens hilariously early, given how much of the marketing for the film has focused on it, and has pretty much nothing to do with the actual plot of the film (it's part of the pre-credits sequence), but the film manages to build later sequences of equal daring and breathtaking construction, from the sequence where Hunt, Ilsa, and Benji infiltrate the power station, to a car and motorcycle chase which puts chase sequences from the Fast & Furious films to shame. Although it doesn't contain the flash and bang of those sequences, there's also a sequence set at the Vienna opera which finds Hunt getting into a fight on the catwalks while simultaneously trying to prevent the assassination of the Austrian Chancellor, which unfolds with clockwork precision and great dramatic tension. While Mission: Impossible - Rogue Nation never breaks free of the conventions of its genre (nor does it try to), it's a fun genre piece and a great entertainment.
Posted by Norma Desmond at 8:00 AM

xhilarating, gripping and filled with thrills from start to finish, "Mission: Impossible Rogue Nation" offers everything you could possibly want from a Summer blockbuster. Summer is the time of the year when audiences simply want to have a fun experience at the movie-theater, nothing more. In this sense, Christopher McQuarrie's latest installment in the popular franchise definitely delivers.