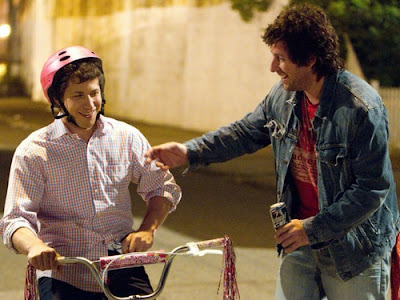 What. The actual. Fuck. How does a movie like this even get made? Assuming that we can all agree that a story about an adult having sex with a child should not be about what an awesome experience that was for the child, then we can all agree that That's My Boy starts off on a bad foot and then stays there. Given that star Adam Sandler is playing is boorish, emotionally stunted mess of a human being (ie a typical Adam Sandler character), I was willing to give That's My Boy the benefit of the doubt, as it started, that the point was that the character's experience really messed him up and that it was a bad thing that happened to him. But that's not where That's My Boy is coming from. Instead it thinks its protagonist's rough edges merely make him "real" and all the more awesome for it, and that the only trauma he experienced was from being separated from his true love when she went to prison. It's like this movie comes from bizarro world.

That's My Boy is the story of Donny Berger (Sandler), who as a young teen in 1984 is "seduced" by his teacher Ms. McGarricle (Eva Amurri Martino), resulting in her being arrested and sent to prison, as well as her becoming pregnant. Young Donny subsequently becomes a pop culture sensation, celebrated throughout the land for his "accomplishment," and sells his life story for a TV movie. By 2012, he has long since blown through the money he made from his 15 minutes of fame and learns that he owes $43 grand in back taxes or he's going to be imprisoned for three years. In desperation, he tries to trade on what remains of his infamy and is informed that the only way to continue to profit from it is if he manages to get Ms. McGarricle and their son, Han Solo Berger, in on it as well. Ms. McGarricle is still in prison, and Han long ago left his father behind and dropped out of contact with him. Fortuitously, the young man, now going by the name Todd Peterson (Andy Samberg), is now engaged and Donny is able to track him down after seeing the wedding announcement. Not wanting to give away his true purpose for reconnecting as Todd already hates him enough, Donny pretends that he just wants to be part of his big day and manages to force his way back into Todd's life. At first Todd is horrified by Donny's presence, but slowly comes to bond with and get to like him, only to find out what he's really up to and banish Donny from his life once again. Now Donny has to find a way to repair the relationship, and the only way to do it may be to blow up Todd's engagement to his fiancee Jamie (Leighton Meester), who isn't quite what she seems.

It's hard to know where to start unpacking things when it comes to That's My Boy. Its premise is that a 14 year old having sex with one of his teachers is the greatest thing that could ever happen to him and not, you know, rape, a misguided and damaging attitude pretty effectively sent up several seasons ago on an episode of South Park. Not only does the film never waver from its "He had sex with the hot teacher? Nice" attitude, it goes out of its way to defend and endorse the relationship as one of love. Donny is an emotionally stunted alcoholic (the film doesn't acknowledge that he's an alcoholic, but he's never without a beer in his hand throughout the film), but by the film's logic this isn't a result of him being a victim of a sexual predator when he was a child. It's a result of him being wrenched away from his "true love," whom he passionately describes as being the only person he was ever able to form a real connection to. His defense of the relationship is treated by the film as something sincere and heartfelt, rather than as a further layer of tragedy to a story of abuse. No one, save for the Judge who sentences Ms. McGarricle to prison (depicted by the film as the very personification of the misogynist's idea of an angry, sexually repressed woman), is remotely critical of the relationship and most people, in 1984 and in 2012, only want to high five Donny for his good luck.

The thing is, because this is an Adam Sandler movie, there was probably no other direction that the story could go in. Sandler habitually plays childish, gross, asshole characters who, according to the logic of their respective films, are ultimately seen as "good guys" who deserve a break. He is the hero of his films no matter how obnoxious the character is and That's My Boy is no different. Donny is depicted as the ultimate "bro" and is wildly embraced by characters at every strata of society. Todd's uptight in-laws love him, as does his wealthy boss and his boss' society matron mother, as do the patrons and strippers at the strip club he attends on a regular basis, as do the just regular dudes who recognize him as the kid who got with the hot teacher. Even Todd eventually comes to love him once Donny takes him out for a night on the town and gets him to loosen up a little bit. The movie thinks that Donny is awesome rather than damaged, and because of that it couldn't criticize the relationship between Donny and Ms. McGarricle even if it wanted to, because to do that would mean acknowledging that there's something the matter with him as a result of it. That's My Boy could have been written by the smartest, wittiest screenwriter in Hollywood and it still would have been in trouble from a story level because of this.

So, aside from its inherently, astonishingly problematic premise, what else does That's My Boy have to offer? Nothing worth bragging about, just the usual misogyny, homophobia, and racism, plus some humor (though I'm loathe to use that word to describe any part of a film as aggressively unfunny as this one) centering on incest and child neglect, just in case the "statutory rape is the best thing that can happen to a young boy" humor isn't tasteless enough for you. Even by the low standards of Adam Sandler movies (a bar that is apparently being lowered with every subsequent film), That's My Boy is a terrible movie with no redeeming qualities.

Should It Have Been a Blockbuster?: It is to society's credit that it was not
Posted by Norma Desmond at 6:32 PM

I have very strange sadomasochistic tendencies to watch movies that are awful just to see how bad it is. Wow, this is one of the worst ever. It's really unwatchable and there is no one to root for as well as the fact that there's a big twist as it relates to Leighton Meester's character. Who green-lighted this shit? It seems like after Funny People, Sandler just gave up and decided to make shit that can make him money and bask in it while making more money schilling stupid product placements into his movies.

Yeah, this was awful. To answer the question about how it got made, it's as simple as knowing who wanted to make it. As crappy as Sandler's movies tend to be, they make money. All of his dumb ideas will keep getting made until they don't rake in the dough, anymore.

Good review! I refused to watch this one because it looked sooo bad and Happy Madison productions are widely considered a big joke anyway. It's funny, if this movie had been about an older man screwing a 14-year-old girl and getting her pregnant, everyone would be disgusted and morally outraged. In our society, women are the ones who are supposed to draw the line and refrain from going 'all the way' with a guy (lest they be branded a 'slut') and men, even boys, are supposed to just enjoy the ride and are apparently incapable of being raped or molested (after all, these are GUYS, they are supposed to enjoy all the attention coming their way.) It's detrimental to both genders.

I recommend you read a book called 'The Tricky Part' by Martin Moran, about a boy who had sex with a middle-aged man when he was twelve and never considered himself a victim (believing himself 'in love') until he reassessed his life as an emotionally wrecked sex addict. it's a really good read if you like true stories.