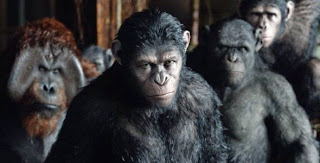 Hollywood is a weird place. It won't invest significant sums of money in movies about women or people of color because of the perceived (though frequently disproved) notion that there's not a viable market for such films, yet it will pour $170 million into a film where, though a handful of white people have prominent roles, the story is told from the perspective of characters who aren't even human and who spend a large amount of their time on screen communicating via sign language. Hollywood can come out with a movie that features several apes who emerge as distinct and well-developed characters, yet can't imagine doing anything with female characters beyond making them someone's love interest or with people of color beyond making them sidekicks. That's not the fault of Dawn of the Planet of the Apes, of course, which is a very good movie that successfully builds and expands on its predecessor; it's just something that occurred to me after the film finished. Like I said, Hollywood is weird.

10 years after the events of Rise of the Planet of the Apes, in the aftermath of a pandemic that has wiped out most of humanity and a period of martial law and anarchy that has seemingly taken out the rest, Dawn of the Planet of the Apes opens with the colony of apes who escaped with Caesar (Andy Serkis) to the Muir Woods having developed a hunter-gatherer society complete with a towering structure which serves as the community's living space, a system of governance, and a system of education in which apes learn English and sign language. The apes believe that humans are long gone, having seen none for about two years, and though most of the older apes are content with this turn of events, Caesar still has fond memories of the good humans he once knew. Caesar and his partner, Cornelia (Judy Greer), now have two young, a male just born and another, Blue Eyes (Nick Thurston), who is now an adolescent. It is Blue Eyes and his friend, Ash (Doc Shaw), who discover humans in the woods, with Ash being shot by a human named Carver (Kirk Acevedo) and the human group, which includes Malcolm (Jason Clarke), his wife Ellie (Keri Russell) and son Alexander (Kodi Smit-McPhee), ending up in a confrontation with the apes. The humans flee the woods and return to the tower where the remaining humans in San Francisco have taken refuge, telling their story to Dreyfus (Gary Oldman), the leader of the human survivors who doesn't at first believe it. It is only when the apes arrive en masse and Caesar declares that the apes don't want war but will fight one without hesitation if the humans don't keep to their territory and leave the apes to theirs, that Dreyfus understands what Malcolm and the rest were talking about.

But the humans need to go through the Muir Woods in order to get to a hydroelectric dam that could restore electricity to the city. After convincing Dreyfus to give him three days to go into the woods and try to get the job done, Malcolm assembles a team - which, unfortunately, must include Carver as he has the knowledge that will get the dam up and running again - and returns to the woods, where he negotiates a truce with Caesar that almost immediately goes awry when Carver is discovered to have secretly brought in a gun and attacks Caesar's newborn. Carver is exiled while the rest of the group is reconciled with the apes, but unbeknownst to Caesar his second in command, Koba (Toby Kebbell), who has a deep hatred for humans due to his experiences as a lab test animal, has a plan to undermine the fragile peace between apes and humans. After undertaking a secret mission to the human stronghold and stealing a rifle, Koba returns to the apes' home and unfolds a false flag plot that allows him to rally the apes to follow him and attack the human settlement. The apes loyal to Caesar, including Maurice (Karin Konoval) and Rocket (Terry Notary) are imprisoned, while Blue Eyes finds himself an increasingly reluctant follower of the new leader of the apes. But while Caesar is down, he's not quite out, and Koba will find himself fighting more than just a battle against humans.

With a screenplay credited to Rick Jaffa and Amanda Silver (who together wrote Rise of the Planet of the Apes) and Mark Bomback, Dawn of the Planet of the Apes builds nicely on the characterizations and events set up in its predecessor. It tells a story which is grounded firmly in what has already been established - Caesar has conflicted feelings for humans because he had experiences with good ones as well as bad, while Koba's feelings are purely negative as he has experienced nothing but the worst of humans - and expands upon it, creating a rich community of characters and inter-relationships that provides the film with an emotional core. As in Rise, the human characters are, for the most part, not as well-developed as the ape characters, however, the film does a good job at drawing parallels between Caesar and Malcolm, who are both ultimately acting in ways that are meant to safeguard their families and ensure their futures. Both hope that a lasting peace can be created between the mutually suspicious sides, and both find their positions undercut by colleagues who are able to use fear and anger to convince others to forgo negotiation and cooperation in favor of violence. The film ends on a deeply somber note, but it earns that ending through the amount of work it puts into developing the story and its stakes.

The visual effects work in Dawn of the Planet of the Apes (which just made the shortlist for AMPAS' Best Visual Effects category) is marvelous, even better than it was in Rise. The apes, particularly Serkis' Caesar, are even more expressive and rendered in a way that allows the line between human characters and ape characters to be blurred, and which allows the performances by the actors playing the apes to come through the technology in an unobstructed way. There's apparently been a push for Serkis as a contender for Best Supporting Actor and, though I don't think the performance is in any way a "supporting" one, if ever a motion capture performance had a chance of securing an Oscar nomination, it's this one. Serkis (as well as Kebbell as Koba) gives a performance which transcends the technology that surrounds it and certainly deserves consideration.
Posted by Norma Desmond at 8:00 AM