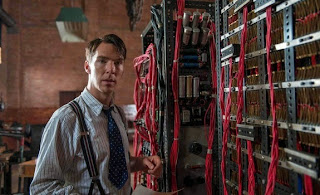 Genius. Outcast. Hero. Criminal. Morton Tyldum's The Imitation Game, adapted from Andrew Hodges' Alan Turing: The Enigma, casts its protagonist in many lights, and in turn casts society in an equal number. The story of a man who did some of his most important work in secrecy, and to the benefit of millions, only to end his life having been publicly tried and punished for his private life, The Imitation Game is a portrait of a man at once at the service of and the mercy of a society in which he never quite fit but which needed him desperately for survival. Though The Imitation Game is accurate more in the broad sense than it is in terms of the finer details, it's a solid and sometimes moving film, anchored by one of the year's best performances.

Shaped somewhat like a thriller, The Imitation Game divides its story among three timelines. One involves a formative period during the adolescence of Alan Turing (played as a teenager by Alex Lawther) when he is lonely and bullied at school and forms a romantic attachment with a male classmate. Another is set in 1952, when Turing (Benedict Cumberbatch) becomes the subject of a police investigation which will eventually see him being convicted of gross indecency as a result of his sexual relationship with another man. The main story, however, is set during the years of World War II when Turing worked at Bletchley Park as part of a team working to break the Nazi's Enigma machine. Cold, self-absorbed, and almost robotically single minded, Turing makes few friends on the team, which includes chess master Hugh Alexander (Matthew Goode), John Cairncross (Allen Leech), and Peter Hilton (Matthew Beard), and makes an enemy of Commander Alastair Denniston (Charles Dance) after going over his head by writing to Winston Churchill in order to seize the leadership role from Hugh and to get the funding he needs in order to build the machine which he believes will be able to break Enigma.

As part of his efforts Turing also brings mathematician Joan Clarke (Keira Knightley) to the team, despite the institutional/social prejudice against women doing "men's" work and her own parents' objections to the idea of her working alongside men. Joan, seemingly the only person that Turing has been able to connect with on a human level since his boyhood friend from school (after whom he names his machine), not only assists with the legwork on the project, but also helps Turing make inroads with the team members so that they'll dislike him less and want to help him more. As it turns out, Turing will need all the help he can get as Denniston is chomping at the bit to shut down his work and possibly even arrest him once it becomes known that there is a mole at Bletchley Park who has been feeding information to the Soviets. Despite those pressures, Turing and his team carry on with their work and eventually succeed in breaking the code, but that success comes with a heavy moral price. They now know where the Nazis will strike next, but have to make decisions about whether various targets are "valuable" enough to risk tipping the Nazis off to the fact that they've broken Enigma. Success also comes without glory as, even after the war is over, they're sworn to secrecy about their achievement.

Adapted by Graham Moore, The Imitation Game weaves together a lot of elements, not always harmoniously. Though the framing device of the police interrogation and the notations that appear at the end of the film would suggest that this is a story about the social backwardness and cruelty of laws criminalizing homosexuality, Turing's sexuality is really a secondary matter within the story. One might argue that the story's focus on code breaking (and, by extension, the creation of a machine that can learn to "behave" like another machine) is an elaborate commentary on how the gay community and its members could quietly carry on in the background during the operation of an overtly and punishingly homophobic social order, particularly in light of a line from the film to the effect that humans communicate in code, but the film's interest in Turing's sexuality seems more like a narrative device than anything. It's an easy way to connect three chapters in Turing's life and to address the tragic postscript to Turing's work during WWII, but the film is ultimately less preoccupied with Turing's identity as a gay man than it is with characterizing him as someone on the autism spectrum. Moreover, its narrative concern isn't so much with the fallout of the police investigation but rather with that work during WWII, the strain that it put on those involved, and the moral questions that arose out of cracking the Enigma code - which isn't to say that the film is entirely factual in that regard, as it appears to have taken some great liberties, but that's the part of the story that it seems most interested in telling and it is, indeed, an interesting story.

On a screenplay level The Imitation Game isn't especially noteworthy - it falls pretty solidly into well-worn genre grooves - but it benefits from a great leading performance and very good supporting ones. Knightley, who has spent the last decade or so balancing glossy action/adventure fare like the Pirates of the Caribbean films and Jack Ryan: Shadow Recruit with more prestige fare like Atonement, Never Let Me Go, and Anna Karenina, turns in a fine performance as the woman who becomes Turing's only ongoing source of human connection and in that context provides the film with a real emotional core, while Goode does more than one might expect with the role of the antagonist turned friend, but it's Cumberbatch's performance that defines the film. While the film makes much of Turing's inability to read social cues and difficulties relating to those around him, the performance never descends into a collection of quirks and tics. Instead Cumberbatch renders Turing as a deeply vulnerable and ultimately very sensitive man (despite what may be considered a cold exterior) painfully at odds with the times in which he lived. The performance is superb in all respects and raises The Imitation Game to another level.
Posted by Norma Desmond at 7:10 PM