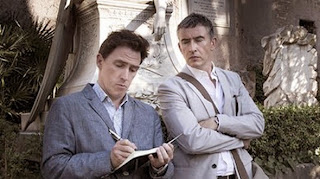 Being on a trip with Steve Coogan and Rob Brydon would probably be a bit of an endurance test, but watching them on a trip with each other is certainly a delight. While The Trip to Italy amounts to little more than two guys bantering, bickering, and doing impressions for just under two hours, stopping occasionally to eat some delicious looking food and take in some scenery, that's more than enough to keep the viewer's attention when the two guys are as funny as Coogan and Brydon. I never saw The Trip, but I'll definitely be catching up with it now that I've seen The Trip to Italy and I'm sure that if there's a third entry in the series (and I can't imagine that there won't be as one sequel never seems to be the end of the story anymore) I'll be seeing that, too.

The Trip to Italy finds Rob Brydon and Steve Coogan, playing fictionalized versions of themselves, heading on a tour through Italy after Rob is commissioned to write a series of pieces in which he follows the trail of Lord Byron. Rob invites Steve to join him and the two set off, needling each other, listening to Alanis Morisette, and bantering back and forth. During their various hotel stops along the way, each connects with their loved ones back home, with Steve realizing that his teenage son Joe (Timothy Leech) is in some distress (even if it's only the general distress of teenage malaise), while Rob struggles to connect with his wife Sally (Rebecca Johnson), who is too overwhelmed trying to deal with their young daughter to give Rob the kind of attention he's seeking from her. Feeling ignored by his wife, Rob strikes up a flirtation with Lucy (Rosie Fellner), who works on a boat which ferries Rob and Steve to one of their many destinations. Flirtation quickly progresses to more, leaving Rob feeling sort of confused and guilty, particularly once he begins considering continuing the affair.

Rob and Steve continue their trip, joined at some points by Emma (Claire Keelan), who is coordinating the trip, Yolanda (Marta Barrio), a photographer with whom Steve had a fling during the previous trip with Rob, and eventually Steve's son. Meanwhile, Rob is also on the verge of landing a part in a Michael Mann film and seeks help from Steve to make an audition tape, during which Steve criticizes him for doing an Al Pacino impression rather than giving an actual performance. The impressions from Rob come fast and furious throughout the film, from Michael Caine (during a hilarious back and forth riff with Steve centered on Caine's portrayal of Alfred in Christopher Nolan's Batman series) to Hugh Grant to every James Bond except Daniel Craig. I'm actually not entirely sure what "Rob Brydon"'s actual persona is because he spends so much of the film "in character" as all of these various other actors, even playing characters in his conversations with his wife and with Lucy (whom he seduces while in the guise of "Hugh Grant").

Written and directed by Michael Winterbottom, The Trip to Italy has a casual, off the cuff feel that only somewhat disguises the fact that it's a film about two men in the midst of mid-life crises. Steve, realizing how much time he's missed with his son and not wanting to lose him entirely, gets the more overtly sentimental arc of the film as he tries to find ways to bridge the distance, bringing Joe out to Italy and suggesting that when they get back to the UK he'll buy a home closer to where Joe lives with his mother. Meanwhile Rob finds himself playing second fiddle for his wife's attentions, wondering if he's still attractive to women, and thus very open to it when he spots an opportunity to sleep with Lucy. One man responds to the fact of getting older by trying to create a more solid tie to his family, while the other reacts by doing things that could undermine the family he's created, and so the film's ending is a mix of happy and melancholy, with Steve sharing a moment of bonding with his son while Rob considers his future, knowing that he's on the verge of giving something up, be it his marriage or whatever he believes he might come to have with Lucy.

Despite these more serious moments, The Trip to Italy is a very funny movie. Coogan and Brydon play off of each other brilliantly, sharing the screen and ceding it to each other instead of competing for the title of "funniest guy in the room." They frequently make each other laugh and that adds to the easygoing feeling that grounds the film from its first moments to its last. I can see ways in which The Trip to Italy would be a film that not everyone would respond to - it's a very "talky" movie for one thing, which some people find boring - but I enjoyed it immensely, from the back and forth between the two leads to the stunning scenery Winterbottom and cinematographer James Clarke capture. The Trip to Italy is a lowkey film, but a very entertaining one.
Posted by Norma Desmond at 8:00 AM