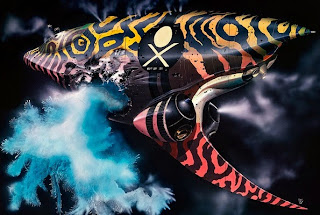 Alejandro Jodorowsky's adaptation of Dune is one of the most influential films never made. It exists in certain forms, such as in the mind of Jodorowsky and the memories of the people who were collaborating on the aborted project with him; in a massive book containing story boards, costume and set designs; and in the wealth of science fiction films that have been released in the decades since the plug got pulled on Jodorowsky's project; but his grand, slightly insane vision never made it to the big screen. Director Frank Pavich's documentary Jodorowsky's Dune does its best to rectify that, letting Jodorowsky talk about what he would have done and how he would have done it and bringing bits of it to life through animation. The result is a delightful film about the triumphs and heartbreaks of making art, the endurance of passion and ideas, and that oh so intriguing question: what if?

By 1974 writer/director Alejandro Jodorowsky had already made his mark with his films El Topo and The Holy Mountain, two bizarre but visionary films which would attain cult status, when he teamed up with producer Michel Seydoux to tackle an adaptation of Frank Herbert's science fiction epic Dune. Although he hadn't actually read the novel when he decided to make the adaptation his next project, Jodorowsky quickly threw himself into it and set about making it his own, putting together a dream team of artists who could help him bring his ideas to life on screen. Among them were the artists and illustrators Moebius, H.R. Giger, and Chris Foss, and special effects artist Dan O'Bannon (who would go on to become better known as the screenwriter of such films as Alien and Total Recall), who helped create the storyboards and costume and production designs which are the only tangible things remaining which indicate what Jodorowsky's version of Dune would have looked like. Hilariously, none of them had read the book either and were merely going by what Jodorowsky was telling them, but as this documentary proves, Jodorowsky is a masterful and deeply engaging storyteller, so it's easy to understand how, on his word alone, these artists were able to create such distinctive, beautiful, and atmospheric images.

Having assembled key members of the behind the scenes team, Jodorowsky then set about putting together an on screen team, the likes of which had never been seen before and have yet to be seen since. He made an agreement to cast Salvador Dali in a small role at the cost of $100,000 per minute of screen time, and got Orson Welles on board by promising to have his favorite gourmet chef from Paris on hand to prepare all his meals. Other cast members would include David Carradine, Gloria Swanson, and Mick Jagger, and the role of the story's hero would be played by Jodorowsky's son, Brontis, who was subjected to a grueling training regimen in preparation for the role. Pink Floyd was set to provide the music. This wasn't just going to be an event movie; this was going to be the biggest, strangest, most epic movie ever made. It was also going to be about 14 hours long, and would have required special effects work to be a couple of decades ahead of where it actually was in order to pull off some of what Jodorowsky had planned, which is why, even after having already sunk $2 million into pre-production costs, the whole thing ended up being called off. Even 30 plus years after the fact, the disappointment of that decision is still obviously felt by all of those involved, who give the sense that they knew they were on the verge of being a part of something special and then had to watch as it crumbled to dust, all that work for naught.

Yet, though the film itself did not come to fruition, Jodorowsky's Dune argues that the work itself still managed to see the light of day. Shots and scenes from such films as Alien, The Terminator and, particularly, Star Wars (as well as others) are compared with the artwork prepared for Jodorowsky's film to show how the would-be epic was essentially stripped for parts after production was shut down so that, even though the film doesn't exist in the form that Jodorowsky designed and intended and that audiences can access, it does nevertheless echo through decades worth of science fiction films. It's a bittersweet victory, but still, in its way, a victory. Also a victory, at least for Jodorowsky, is what would eventually happen with Dune, which was eventually made by David Lynch and released in 1984. Jodorowsky's description of being dragged to see the film, afraid to see a director he respected pull off what he had failed to do, and then actually sitting down and watching it and... well, I don't want to spoil his reaction to the actual product, because his telling of it was hands down my favorite part of Jodorowsky's Dune and one of the biggest laughs I had at any movie I saw this year.

Jodorowsky's Dune presents a tantalizing picture of a film that might have been and does a fine job of capturing what it once meant and what it still means to those who were involved in it. While Jodorowsky's vision probably never could have come to pass in exactly the way that he wanted it to - the length alone would have made it impossible - Jodorowsky's Dune shows how the filmmaker could have gotten so many people behind that vision and contributing to it, how his enthusiasm would have given them confidence in him and belief in his ability to make it happen. He was mad, but he was also a genius, and though the documentary is fairly conventional in the way that it unfolds, it captures that reckless artistic spirit that drove him and the project forward in the first place. We'll never see what Jodorowsky's film could have been, but as this documentary so effectively argues, it lives on throughout the genre, a vision that has been born and reborn time and time again.
Posted by Norma Desmond at 8:00 AM