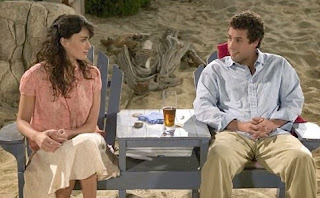 Though I didn't see it in 2004, I remember that before it came out Spanglish was a film that was being predicted as a sure-fire Oscar movie by those who predict such things. And why wouldn't it be? Aside from a misstep with 1994's I'll Do Anything, director James L. Brooks had a stellar track record going into Spanglish in the form of Terms of Endearment, Broadcast News, and As Good As It Gets. All three were nominated for Best Picture (with Terms winning) and between them they earned 25 Oscar nominations. While the presence of Adam Sandler might, at any other point in his career, have signaled doom, in 2004 he wasn't so far removed from the great reviews he received for 2002's Punch-Drunk Love. Yet even with all that it superficially seemed to have going for it, it was passed over by Oscar (except for a Best Original Score nomination it was even passed over by the Golden Globes - the Golden Globes! An organization which has historically existed to reward star quality before product quality and which that year nominated the atrocious 2004 version of The Phantom of the Opera for Best Picture, Musical or Comedy). How does that happen? Well, when the movie in question is as off-putting as this one, it's a lot easier to understand.


The Story
A single mother from Mexico moves to Los Angeles with her young daughter in the hope of giving her a better life and greater opportunities. The mother begins working as a maid for a wealthy family dominated by a high strung wife who is pushing her husband and their daughter to the brink without even seeming to realize it, and who will trample over the relationship between the maid and her daughter without a second thought.


The View From 2004
The Good: "Spanglish is a performer's showcase. While the pleasantly sentimental comedy doesn't bowl you over with cinematic technique, it's likely to make audiences happy. Brooks has directed four previous features, and three of them are Terms of Endearment, Broadcast News and As Good as It Gets. Audience-friendliness is something he knows." - Mike Clark, USA Today

The Bad: "This is a deeply unpleasant movie masquerading as a heartfelt social commentary on life in these United States (or at least in the wealthy republic of Beverly Hills)... the story line explains little of the unsubtitled language of anger spoken here by Brooks, a Hollywood veteran who was once the softie behind Terms of Endearment and The Mary Tyler Moore Show, and is now a muttering cynic." - Lisa Schwarzbaum, Entertainment Weekly


The View From 2014
Any discussion of Spanglish, particularly its problems, perhaps inevitably must begin with the character of Deborah Clasky, played by Tea Leoni, who is an example of a character that is, all at once, both exhaustingly and lazily rendered. Deborah is the worst, a veritable hurricane of entitlement, privilege, and self-absorption who demands to be listened to at all times but refuses to hear anyone else. Deborah believes herself to be kind and progressive because she hires Paz Vega's Flor and insists that she and, by extension, her daughter are now part of the family, but her actions continuously betray the fact that she doesn't actually see Flor as a human being deserving of respect (her actual words sometimes have this effect as well, such as when she's learning how to pronounce Flor's name and declares, "Flor, like what I walk on."). When the family decides to go away to their vacation home for the summer, Deborah plans, without bothering to ask first, for Flor to come as well and become a live-in maid for those months and it doesn't seem to occur to her that this has the potential to be a major inconvenience for Flor. When it's explained to her that to do as she's demanding Flor will have to give up her apartment and uproot her daughter, Cristina, Deborah's response is basically, "Too bad, this is what I need, either do it or be fired." So Flor gives in and moves into the vacation house with Cristina, who is about the same age as Deborah's daughter and who is embraced by Deborah because she looks the way that Deborah wished her own daughter looked. Without asking Flor, Deborah begins taking Cristina on various outings and when Flor attempts to object, Deborah literally contorts herself to avoid taking the letter that Flor has written as a means of expressing the hurt and anger that she feels about what Deborah has done, and then shuts a door in her face. Deborah refuses to be criticized or to pay heed to anyone else's concerns and nearly every scene finds her dismissing the feelings of someone else, from her daughter to her husband to Flor, while staking a claim on the great importance of her own feelings. Deborah is a bulldozer, but what makes it so bad is that she's can't even own her behavior and instead acts like everyone simply can't see the good that she's doing.

Deborah begins the film a terrible person and ends the film a terrible person who feels sorry for herself, which I'm not sure is much of an improvement; but what makes her so bad is not just that she's awful all on her own, but that her awfulness is used by the film as a false shorthand for the goodness of the other characters. Deborah is such an outright villain that no one else has to be particularly heroic in order to come out looking like the good guy, especially her husband John (played by Adam Sandler). John is a character that we're meant to have a great deal of sympathy for - I mean, look what he puts up with and consider the sacrifice he and Flor, who apparently fall in love at some point in the movie (search me regarding when, exactly, this happens), make when they agree to never see each other again so that he can keep his family intact - but why? Deborah might behave like a monster but John does nothing to try to reign her in or stand up to her. Consider the scene in which Deborah makes her daughter cry by shaming her about her weight and consider how John pretty much just stands there and only expresses his anger privately to Flor (who at that point doesn't even understand English). The film mistakes John's spinelessness for niceness and puts him on a pedestal, treating him like a tragic figure when he's merely an ineffectual one.

The problems with Spanglish extend beyond the construction of Deborah and John as characters. Brooks' instincts to go broad in terms of the comedy are unrestrained here and the result is a tone which is often shrill and scenes which quickly degenerate to a level of "wackiness" that would feel over the top in many sitcoms. To be fair, this is less true of scenes towards the end of the film, when the tone calms down considerably and scenes begin to feel less forced, but the scenes which establish Deborah and John and their family are almost unbearable because of how hard the film strains to be funny, going big as if to overcompensate for what it ultimately knows it's lacking. It's a comedy that doesn't have many laughs and a film which, on close examination, has no story. What, exactly, is Spanglish supposed to be about? Is it a story about how the immigrant experience can widen the generation gap between a parent and child? If it is, it spends an awful lot of time focusing on the problems of affluent white people while reducing its immigrant characters to supporting players. Is it a love story about a man and a woman for whom circumstances make a relationship impossible? Only in its third act and when (one suspects) it needs to find an efficient way to wrap up all its threads. Is it a story about how parents sometimes understand the needs of other people's children better than those of their own? For a scene or two, yes. Really, though, there's no narrative here. Spanglish is a series of "situations," some of them outlandish, some of them striving for something more heartfelt, placed side by side in a masquerade of a story.

As ill-conceived and executed as Spanglish generally is, it's not entirely without merit. Vega, a luminous actress whose failure to cross-over in the US will never cease to amaze me, manages to give a nicely understated performance which allows her character to emerge as one of the few in the entire film to seem like an actual person, and together she and Shelbie Bruce, who plays Cristina, anchor one of the few scenes which actually work when Flor unleashes a tirade in Spanish which Cristina translates for John's benefit, complete with mimicking Flor's mannerisms. Meanwhile, for all the flaws inherent in the film's conception of John as a character, Sandler actually does render a good performance and in another movie, one with a clearer focus and sense of what it wants to do, he and Vega could have made for a compelling couple. In the supporting ranks Cloris Leachman, who plays Deborah's alcoholic mother, gives a performance of such warmth that it transcends the "crazy"-but-ultimately-wise grandparent trope so often trotted out by family comedies, and while I think that Deborah is a terrible character, I also think there's something weirdly admirable about Leoni's willingness to go full-throttle with her. None of this makes Spanglish any less of a mess, but at least it allowed me to finish the film without feeling like it had been a complete waste of my time.
Posted by Norma Desmond at 8:00 AM

I saw this way back when and was rather indifferent toward it. Vega and Leachman were outstanding while Sandler does his Everyman routine that he trots out from time to time. Leoni was also really good, though everything you say about her character is true. Nice writeup.