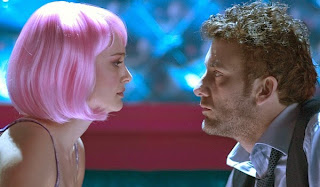 Love is a battlefield. The characters in Closer take that notion to heart, waging a winner take all brawl which leaves them all a little worse for wear by the end. The winner? Anyone and everyone who doesn't end up with any of these idiots. This is a story about four increasingly repulsive people who throw the word "love" around while openly embracing misery and making sure to spread it around to others. Closer is the sort of movie people describe as being about adults, yet it centers on characters whose emotional maturity seems to have peaked at approximately the age of 12. To be sure, the performances (particularly that of Clive Owen) are occasionally electrifying, but good lord is this story, with its seemingly endless back and forth and back again, tedious.

Set in London, Closer tells an elliptical story about the series of relationships that will play out between Alice (Natalie Portman), Dan (Jude Law), Anna (Julia Roberts), and Larry (Owen). It begins with Alice, an American who has come to England following a break up, and Dan, an aspiring novelist currently writing obituaries, who meet when Alice is hit by a taxi while crossing the street. A year later Dan and Alice are living together, she is working as a waitress and he has just written a novel which is about to be released. He meets Anna, the photographer hired to take the photo for his book jacket, and is instantly smitten with her despite his relationship with Alice, whose life has provided the basis for his novel. Dan makes several overtures to Anna, not even ceasing when Alice shows up and leaves Dan and Anna alone for a few moments while she uses the washroom. Though Dan believes he's pretty smooth, Alice understands immediately what has happened between Dan and Anna and makes that clear to Anna, who in response insists that she's not a "thief." Another year passes and Dan plays a prank on a man in an internet chat room by posing as Anna and making arrangements for the man to meet Anna for sex. The man is Larry, a dermatologist, who arrives at the meeting place and actually finds Anna there, only to be humiliated when it becomes apparent that he's been tricked. He does, however, manage to charm Anna, though her openness to him is at least in part a result of her realization that Dan is behind the trick and her desire to get back at him for it.

Four months later Anna's work is put on exhibition, including a photo she took of Alice. Anna and Larry are now firmly a couple, and Alice and Dan are still together. Dan, whom Anna and Larry jokingly refer to as their "cupid," is still determined to be with Anna though what, exactly, she wants is not quite as clear. A year later Dan reveals to Alice that he and Anna, who is now married to Larry, have been having an affair for a year. Dan and Alice break up and she disappears into the night, and Anna leaves Larry to begin a relationship with Dan in earnest. Anna files for divorce but Larry, who wants to reconcile with her, makes the process difficult and eventually tells her that the only way that he'll sign the divorce papers is if she sleeps with him one last time, a proposition which devastates Dan. Larry further gets the better of Dan by accidentally finding Alice, who is working as a stripper and insists to Larry that her name is "Jane." Larry wants her to come home with him and to admit that she's Alice, but she continues to state that her name is Jane and refuses his overtures - at least until she doesn't, which isn't revealed until after the two couples have returned to their original configurations.

In 2004 Closer, with its all-star cast and Mike Nichols as director, had the sheen of a can't miss prestige project and was a magnet for year-end award nominations and several wins (mostly for Portman and Owen). I didn't see the film in 2004, if I had perhaps I would have liked it more as this may be one of those "of the moment" films that plays best at the time of its original release, but in 2014 I found it pretty boring. It does sometimes crackle to life - particularly whenever Owen, who leans into Larry's roughness and makes his vulgarity seem almost to be a virtue, is on screen - but mostly it's about four people who have no real problems except for the ones they seem compelled to invent for themselves. At one point Larry tells Dan that Anna likes to be "miserable," which seems to be true, but it's true of all of these people. They are constantly undercutting their opportunities for happiness and their restlessness seems to be matched only by their overwhelming need to be honest with each other only when it's time to reveal the most devastating truths. They are brutal with each other but that doesn't make any of them especially interesting as characters, and the way that the story is structured, so that we're constantly dropping in on them for the "big" moments and the big reveals while everything leading up to those moments occur off screen, sort of ensures that they can't be interesting because the film doesn't show the work. It's scenario A, scenario B, scenario C, etc. so that we're always meeting the characters once they, or their circumstances, have changed but we never see the developments that lead to those changes.

For a film with a plot which turns on its characters partner swapping and declaring their love and hate for each other at every turn, Closer is an oddly passionless film. There's more heat between Dan and Larry than there is between any of the male/female pairings, though perhaps that's intentional. The story begins with a triangle between Alice, Dan, and Anna, but it doesn't truly begin to move forward (or, alternately, round and round) until Dan engages Larry, seducing him by pretending to be Anna and thus bringing him into the fold. There are multiple relationships directing the story, but the relationship between Dan and Larry is the one that eventually dominates, as the film becomes less about relationships between men and women and more about the relationship/pissing match between these two men. Neither Anna nor Alice really matters, it's all about who ends up with the upper hand between Dan and Larry but by the time you, as a viewer, get to that point, do you even care anymore? I didn't. Not once I realized that no matter how much longer the film went on, the characters weren't going to take on much in the way of depth. Closer is a film with good moments - with a cast like this one and a director like Nichols, it would have to have at least that - but it's a lot thinner and far less revelatory than it believes itself to be.
Posted by Norma Desmond at 8:00 AM