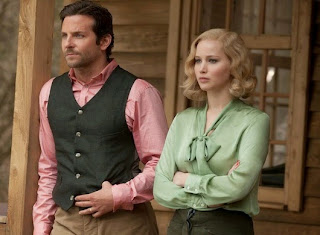 I don't think that any film that has shown up at any of my local movie theaters this year has made my ears perk up quite as much as Serena. It's not so much that the film has good buzz - there only seem to be a few reviews online and they run the gamut from mixed to negative - but that there's such an air of mystery about it that watching it feels like going into uncharted territory. This is a movie that was made in early 2012 and is just emerging now (though it won't hit theaters in the US until 2015), despite starring two actors who have gone on to become two of the biggest stars working today, each of whom received Oscar nominations for both of their last two films together. Even if it was terrible, I don't understand how a movie like this could end up buried and then, essentially, abandoned - surely the curiosity factor alone could make it modestly viable as a commercial product. For the record, I do not think that Serena is a terrible film, though it's one that I would describe as "fascinating" more than "good." I went back and forth a lot when trying to decide on a rating for it because it is certainly deeply, deeply flawed in its present form but if it's a failure, at least it's an interesting one.

Serena opens in 1929 in the Smoky Mountains in North Carolina, where George Pemberton (Bradley Cooper) struggles to keep his burgeoning timber empire afloat. The stock market crash has rendered his company almost worthless and the only way that he can get further loans from the bank is by putting up some land he has in Brazil - land which he intends to retire to once he makes his fortune - as collateral. Shortly after making the deal George meets Serena Shaw (Jennifer Lawrence), who grew up in a timber camp and was orphaned at the age of 12 when her entire family was killed in a fire, and immediately takes a shine to her. When George returns to his timber camp, he does so with Serena on his arm, introducing her as his wife to the shock of his business partner, Buchanan (David Dencik), and Rachel (Ana Ularu), a young woman who works in the camp and is noticeably pregnant. Serena takes one look at Rachel and immediately understands that George is the father of her child, but insists that the things that happened before they met don't matter so long as Rachel is made to understand that neither she nor her child will have any claim on what George and Serena are going to build together. Serena's desire for active participation in the business quickly makes an enemy of Buchanan, who feels his position as George's confidante and adviser being usurped, but George encourages her involvement as her knowledge proves valuable in the growth of the business.

Soon enough Serena is herself pregnant, though her happiness with George hits a skid when she discovers that the Brazil property, which George had promised her would be where they would spend their future, has already been lost to the bank and when Rachel returns to the timber camp with her infant son, Jacob, in tow. George promises Serena that henceforth he will tell her everything and not try to hide anything from her, though this promise is broken when he secretly begins providing financial support to Rachel. Meanwhile, a group which includes the local sheriff (Toby Jones) begins a push to prevent George's company from clearcutting the mountain in order to preserve the woods for a national park, making it necessary for bribes to start going out to politicians and judges so that business can carry on as usual. Feeling that he's been shunted aside in favor of Serena, Buchanan proves to be exactly the weak link that the sheriff needs in order to cut George down to size, however, neither of them count on the fact that Serena will go to any lengths to protect what she has with George, or that George is so enamored with her that he will do anything she tells him to. But even when George starts to become reluctant to do her bidding after the miscarriage of their child precipitates her swift descent into madness, she gains another ally in the form of Galloway (Rhys Ifans), a member of the camp who declares himself honor bound to her after she saves his life and who will ruthlessly carry out any order she gives him.

The most interesting thing about Serena, at least from a story perspective, is its title character, a woman of ambition, skill, and cunning, who openly declares that she isn't going to be the sort of wife who sits around doing needle point while waiting for her husband to come home and who, in fact, spends more time up on the mountain with the workers than her husband does and earns the respect of the men by showing that she knows what she's doing and what she's talking about. Even after she becomes pregnant she continues to go up the mountain to oversee the work, yet at the same time she sees motherhood as the ultimate goal of her marriage to George so that she can provide him with "real" sons to make him forget about his son by Rachel. It's when she learns that she will never be able to do this that she begins to go mad. Serena is a woman who is valued by George specifically for her "unladylike" qualities such as her business acumen, her unwillingness to be a passive observer, and her powerful sexuality, but who loses her mental bearings once the most female of qualities - the ability to bear children - is taken away from her; she at once shuns and fully embraces her societally prescribed role as a woman. She's a complex character, a woman who draws obvious comparisons to Lady Macbeth but also reminded me ever so slightly of the character Cathy from John Steinbeck's novel East of Eden (a role that Lawrence will reportedly play in the forthcoming adaptation), and yet is ultimately her own creature, an elusive, dangerous, and seductive thing not unlike the panther that George spends the film tracking and trying to kill. She's not a likeable character, which is in itself remarkable in film, but she's not wholly unsympathetic either, despite the violence that follows in her wake. She has, after all, been sold a false bill of goods in George, who consistently tells her one thing and then is revealed to have done another, and that underlying lack of security makes her need for control (even if that control is seized through acts of brutality) more understandable. To be sure, the way that the film is put together makes Serena's descent into madness seem somewhat more abrupt than it should, but it definitely doesn't come out of nowhere.

It isn't often that I think a film should be longer than it already is, but if a longer cut of Serena were made available I would watch it in a heartbeat, as this version feels like it's missing vital minutes which would bring the film's themes and characterizations into much sharper focus. I think that there actually is a really good film in here which has been whittled down to its basics in the editing room with an eye towards keeping it to a short running time rather than to bringing the story to its full realization (this feels particularly true of the subplot involving Galloway). There are definitely problems beyond the editing - everyone seems to be doing their own thing accent wise, and Lawrence struggles slightly with one aspect of her character, as the volatile sensuality that defines Serena is not really in her wheelhouse as an actress (Angelina Jolie was apparently attached to the film at one point and she would have killed in the role; Gemma Arterton could have done wonders with it) - but those aren't problems which are as defining as the editing, which has left the film feeling like a natural epic squeezed into a running time which is too tight for it. In the end Serena is like a beautiful animal that has gotten caught in a trap - it's mangled and wounded, but it still contains traces of its original beauty and inherent majesty.
Posted by Norma Desmond at 8:00 AM