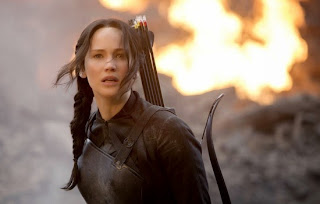 There will come a time once The Hunger Games series finishes when I'll revisit all of the films and perhaps at that point I'll have a better appreciation for Mockingjay - Part 1. Right now I'm having a hard time finding an artistic justification for the series having joined the increasingly annoying trend of splitting the final story of a would-be trilogy into two films (the economic justification is, of course, obvious). Don't get me wrong, Mockingjay - Part 1 is a good movie and I liked it well enough, but there's no denying that it feels distinctly... padded. At 123 minutes it's the shortest film of the series by nearly half an hour, yet it lacks the sense of urgency of either of the predecessor films and the amount of table setting for the next film is much more obvious here than it was in either The Hunger Games or Catching Fire. If those films were representative of Katniss being the "girl on fire," Mockingjay - Part 1 is representative of Katniss being the "girl on a slow simmer."

Picking up where Catching Fire left off, Mockingjay - Part 1 opens with Katniss having been rescued from the Hunger Games arena by the rebels of District 13. Fellow victors Beetee (Jeffrey Wright) and Finnick (Sam Clafin) are there as well, but Peeta (Josh Hutcherson) and Johanna (Jena Malone) have been captured by the Capitol. While recuperating from her injuries in District 13's underground facility, Katniss is informed by former Gamemaker Plutarch Heavensbee (Philip Seymour Hoffman) and the rebel President Coin (Julianne Moore) that her actions have inspired demonstrations and small uprisings throughout Panem. Now they want to use Katniss as the face of their propaganda campaign, which they hope will unite the insurgent factions spread through Panem as one army to overthrow the rule of the Capitol and President Snow (Donald Sutherland). Though she initially refuses, Katniss comes around after her sister, Prim (Willow Shields), convinces her that she could leverage her notoriety to get Coin to make certain concessions to her, chief among them the rescue of the victors captured by the Capitol and a pardon for Peeta, whom members of the rebellion, including Gale (Liam Hemsworth), have denounced as a traitor due to his participation in propaganda on behalf of the Capitol.

To the frustration of the top brass, Katniss fails at the planned propaganda piece, unable to deliver a natural and convincing performance in front of a CGI backdrop. It is only after a bit of brainstorming with her Hunger Games mentor Haymitch (Woody Harrelson) and the reluctant rebel Effie Trinket (Elizabeth Banks, more glorious than ever) that it is decided that Katniss will be allowed to go out into the field with a camera crew to capture her in a more natural element, at which point she truly proves her worth as an effective symbol of the resistance. While the rebels and the Capitol at first do little more than trade video salvos back and forth - with Peeta, in his videos, begging Katniss not to incite further violence which can only wipe out everyone in Panem - after rebels in Districts 5 and 7 kill a team of peacekeepers and destroy a dam, respectively, the violence between the sides escalates. The Capitol bombs the District 13 stronghold, but ultimately fails in its attempt to draw the rebels into counterattacking and thereby revealing the locations of their armaments; while the rebels succeed in a special mission into the Capitol and then discover that they've wandered into a trap, though the exact nature of that trap only reveals itself slowly. The lines are now firmly drawn and any notion that the two sides are not at war is now completely swept away.

While Mockingjay - Part 1 left me just a little bit cold and I felt that parts of it dragged (the covert mission into the Capitol should have been one of the film's most exciting sequences but the way that it was put together, intercutting it with Finnick delivering a halting speech, had the effect of sucking all the momentum out of it), there's actually a fair bit that I really liked about the film. Lawrence continues to just get better in the role of Katniss, digging just a little bit deeper with each film in order to show the toll that her experiences and the demands placed on her by others have taken on her, while Hoffman demonstrates how vital he could be even in a small role (the same could be said of Harrelson, whose time on screen is brief but always welcome), and Moore delivers a performance that allows Coin to remain a bit of a question mark without making her seem inconsistent. Sutherland, as always in these films, delivers a performance of quiet but commanding menace. But the more of the series I see, the more I become convinced that Banks is its secret MVP. Effie started out as a character who, on the surface, was little more than a garish cartoon but Banks has found the humanity in her in each outing and brings some much needed levity to every scene she appears in (the great delight of this film is the way that every time Effie shows up she's found some new way to accessorize and punch up the drab rebel uniform).

Though I was just a bit disappointed in this film, I'm nevertheless intrigued enough by what it sets up that I'm looking forward to Mockingjay - Part 2. I haven't read the books and I've managed to remain somewhat in the dark about the way things will play out so I may end up being way off base on this, but I think this film does a good job at foreshadowing that Coin, and the rebellion, is not necessarily all it seems to be. While the Capitol under President Snow is overtly evil, the rebellion under President Coin seems like it will be a "new boss, same as the old boss" type situation. The Capitol may be a place of flamboyant displays of individuality and Caligula-esque descents into depravity, but the rebellion's strict conformity of dress and of personality (when the rebels cheer, they cheer as one voice; when they boo Peeta, they do it as one voice; when they greet the end of one of Coin's speeches with the war cry "Oorah," they do it automatically and as one) point to something sinister and to Coin as being at the center of her own cult of personality. As I said, I might be wrong on this, but I'm definitely looking forward to finding out next year.
Posted by Norma Desmond at 8:00 AM