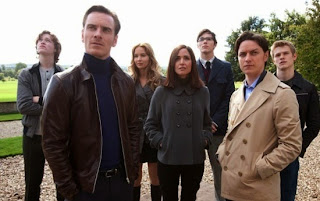 Because I watched The A-Team, Total Recall and Rise of the Planet of the Apes, Netflix decided that I might want to watch X-Men: First Class, even though X-Men has fairly little in common with any of those movies because even when Netflix provides some reasoning behind its recommendations, it's still basically random. Until seeing this movie, I'd never actually seen any X-Men film in its entirety (I've seen almost all of X-Men except for the last 15 or so minutes) and I know pretty much nothing about the X-Men mythology except for what I can recall from the animated series which aired when I was a kid, so I'm probably not the ideal viewer for this film, but nevertheless I did like it. It's a vibrant film with a good mix of action, drama, and humor, easily accessible to someone like me while containing elements which allow it to fit in as part of the film series which preceded it (which, as I understand it, sort of eschew the concept of continuity as something pesky and unimportant anyway, so I suppose that "fitting in" wouldn't be too difficult).

After a prologue which introduces Erik Lehnsherr, Charles Xavier, and Raven Darkholme as children, with the former a prisoner in a concentration camp who gains the interest of scientist Klaus Schmidt (Kevin Bacon), while the former two meet in Westchester County and are delighted to discover that the other also possesses special abilities which set them apart from others, the story catches up with all three 18 years later. Erik (Michael Fassbender) is now hunting Schmidt (now going by the name Sebastian Shaw) around the world, and Charles (James McAvoy) has just gained his PhD from Oxford with Raven (Jennifer Lawrence) by his side as his girl Friday. As a result of his thesis regarding mutation, Charles receives a visit from CIA agent Moira MacTaggert (Rose Byrne), who has firsthand knowledge of the existence of mutants after having witnessed several of them - Shaw's cohorts Emma Frost (January Jones), Riptide (Alex Gonzalez), and Azazel (Jason Flemyng) - in action. Charles is enlisted to help the CIA track down Shaw, whom they find only moments after Erik finds him and unsuccessfully attempts to kill him. Shaw escapes and Erik, Charles, and Raven are taken to a special CIA facility where they meet Hank McCoy (Nicholas Hoult), a scientist and secretly (until Charles accidentally outs him) a fellow mutant. Using Hank's invention Cerebro, Charles is able to amplify his telepathic abilities in order to find other mutants that can be recruited to help take down Shaw and his team.

The mutants who are recruited are Angel Salvadore (Zoe Kravitz), Sean Cassidy (Caleb Landry Jones), Armando Muniz (Edi Gathegi) and Alex Summers (Lucas Till), but while Erik, Charles and Moira are in the USSR trying to capture Shaw (but only succeeding in capturing Emma), Shaw infiltrates the CIA facility along with Azazel and Riptide, killing every human in sight, and convincing Angel to cross over to their side. Armando is killed in the fight that ensues and the mutants are later moved to Charles' family estate, where they begin training to take on Shaw and stop him before he can start a nuclear war. The mutants learn to control their various powers and, in Raven's case, to accept the physical differences she has struggled to keep hidden all her life. Together the mutants, having taken on the code names Professor X (Charles), Magneto (Erik), Mystique (Raven), Banshee (Sean), Havok (Alex), and Beast (Hank) - Hank's "Beast" persona the result of a "cure" he's created to fix his mutation which instead backfires and gives him blue fur - go to Cuba, where the Soviets, at Shaw's behest, are going to attempt to install missiles and the US is going to attempt to stop them. What begins as potential war between two governmental superpowers, however, soon transforms into something else entirely as political divisions are erased and enemies become allies in a fight against something they mutually fear.

X-Men wears its allegorical nature on its sleeve, using a story about beings with superpowers to tell a story about civil rights and how minority populations engage not only with the majority population but with itself as well. It isn't a simple "us" vs. "them" story, but a more complex story about the divisions that can occur within a movement as a group fights for its rights to exist and to thrive. Shaw wants to annihilate non-mutants, while Charles wants to find a way for mutants and non-mutants to live together in harmony, and Erik, though he fights on the same side as Charles, ultimately shares Shaw's perspective that non-mutants are the enemy. Erik can see that once they eliminate Shaw as a threat, that they will become the threat in the eyes of those who were initially their allies, that mankind will fear mutants and that that fear will congeal into hatred (it's the same process that Erik has undergone, his experiences in childhood having caused him to fear and then hate human beings and to adopt an offensive stance against them as a precautionary measure). Cooperation and, in particular, assimilation are not goals that Erik would pursue, while Charles sees them as the very keys to survival. While the film can't really be said to be subtle about the themes it's exploring, it's compelling nevertheless, especially with actors like McAvoy and Fassbender exploring the territory.

X-Men: First Class packs a lot of story into one film, telling as it does an umbrella origin story containing several smaller origin stories within it. As a result, it's not as fast paced as it could be (though it does manage to find a nice balance between action-based and character-based scenes), nor does it really develop all of its characters and their relationships - for example, I don't think Riptide is ever properly introduced or even called by name throughout the film, Angel's switch from good to bad happens in about a split second and without much prompting from Shaw, Shaw seems to forget about Emma entirely once she's captured by the CIA, and when it comes to Charles' lifelong friendship with Raven, the story does a lot more "telling" than "showing" - but it ultimately does very well by its two key characters (Charles and Erik) and the complex relationship which will see them transitioning from friends and allies to opponents, if not outright enemies. The film places a lot of value on those characters and their relationship (and, ultimately, on the consequences of that relationship for everyone else) and it definitely pays off.
Posted by Norma Desmond at 1:56 PM