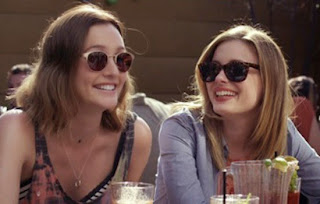 Sometimes growing up means growing apart. Following in the footsteps of last year's great Frances Ha, Susanna Fogel's Life Partners is a film about a friendship between two women, once the central relationship in both of their lives but now undergoing a change as one of the women enters into a relationship. The twist in this story is that one of the women is gay and the other straight, though while this provides some different shadings to it, the ground it's covering ultimately remains familiar. While Life Partners never comes close to the heights of Frances Ha, it's a generally enjoyable and entertaining film, even if the narrative becomes increasingly shapeless as it moves into its third act.

The two women in question are Paige (Gillian Jacobs) and Sasha (Leighton Meester), the former a type-A lawyer, the latter a receptionist who officially aspires to be a musician, though she seems to be doing anything to avoid actually making music. Bored one night, the two pass some time trolling an online dating site and each make a date, expecting it to be as disastrous as all the other dates they've been on recently. However, while Sasha's date with a woman (Saturday Night Live's Kate McKinnon, who should be in more things and doing more things in them) who is a celebrity only in her own mind goes as expected, Paige's date with Tim (Adam Brody), a young doctor, goes much better. Soon Paige and Tim are fully dating and Sasha finds that she's slowly being edged out of Paige's life by Tim, who is so affable that not only is he not actively trying to do it, but doesn't even seem to realize that it's happening. While Paige's relationship with Tim continues to progress, Sasha bounces in and out of a series of short-term relationships with younger women whose lack of ambition mirror her own and give her an excuse to extend her already greatly extended adolescence just a little bit further.

The already wide chasm that has grown between Paige and Sasha becomes even bigger once Sasha begins dating Vanessa (Abby Elliott), the ex-girlfriend of their friend, Jenn (Beth Dover). Whether she's trying to match Paige by showing that she, too, can be in a serious relationship that consumes all of her time, or whether she's clinging to Vanessa because her circle of friends is mad at her for being in the relationship in the first place, Sasha goes all in. Soon, however, and despite her attempts to play up her newfound happiness, Sasha's life begins to fall apart around her as she loses her day job and her relationship, and as she continues to struggle with the expectation that she'll keep working on her music until she attains success, even though she's secretly grown ambivalent about what was once her ambition. Meanwhile, though Paige's life is outwardly more together after she wins a big case and becomes engaged to Tim, it is also starting to come apart as a result of an incident with one of her neighbors.

The first half of Life Partners is really good, as Meester and Jacobs are able to provide a solid sense of a friendship which extends back about a decade, allowing the characters to relate to each other in an easy, unforced way. Even when the two characters are at odds, they relate to each other in such a way that it's believable that they've been friends for a really long time and know exactly which buttons to push, and the shift that occurs once Tim is introduced into the dynamic feels natural (even if it does happen very quickly). While Paige has already pulled ahead of Sasha in terms of her transition to a real adult life, it's only once she meets Tim that the true distance between the friends starts being measured. They're at vastly different places in their life, with Paige ready to move forward and Sasha seemingly anchored in place, and the fact that they would grow apart is as inevitable as it is painful. The film explores this with sensitivity and humor, but then seems to lose its sense of purpose as it enters the second half of its story and just starts throwing in subplots in lieu of actual narrative development.

The second half of Life Partners is not so good, as it spends a lot of time spinning its wheels and not really seeming like it knows what to do with its characters in order to get them towards the planned resolution. Obviously there will be a break followed by a reconciliation, but what happens in between feels more like filler than anything, and the notion that Paige and Sasha have an equal need to learn and grow in order to get to the next phase of their friendship rings sort of false. Sasha is still living like a college student because she fears taking the next step and failing, and through the course of the film she realizes that she needs to start being more active in the way that she engages with her life otherwise she's going to be left behind and kicking herself over the things she never pushed herself to try. Meanwhile, Paige... needs to learn to apologize, or something (as a slight aside, I don't know a single lawyer who would accept responsibility for the incident that starts Paige's little war with her neighbor; this is the sort of thing most lawyers would fight to the metaphorical death simply for the principle of the thing). The film tries to treat their issues as if they are equally weighted when they just aren't, and then has to try to bend the characters and the story to fit that notion. Life Partners is worth the watch for all that it does right, but it does ultimately fall just short of what it could have been.
Posted by Norma Desmond at 3:31 PM