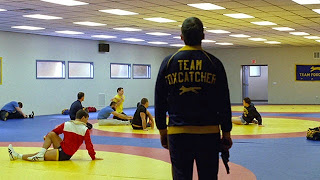 Many "true crime" stories attempt to provide some sort of answer to the question of why the crime took place. Bennett Miller's Foxcatcher takes a different approach, merely observing that the crime took place without trying to make it part of a neat, clean narrative. Context does not make it any less senseless, which of course makes it all the more bizarre and intriguing. There are no easy answers in Foxcatcher, just a story of how a confluence of disparate issues - from how neither wealth nor success can necessarily prevent someone from becoming alienated from everyone around them, to how wealth can inspire society to indulge behavior that would otherwise be unacceptable, and how the easily commodifiable patriotism of international sport ends up leaving the actual athletes behind - created an atmosphere where tragedy seems almost inescapable.

Foxcatcher opens in the shadow of the 1984 Olympics, where brothers Dave (Mark Ruffalo) and Mark (Channing Tatum) Schultz both won Gold medals for wrestling. In the opening scene Mark, subbing for Dave, speaks at an assembly half-full of mostly bored looking kids in order to earn a $20 paycheque and then goes home to eat ramen noodles, living in poverty as he prepares for the 1987 World Championship and the 1988 Olympics. He is particularly vulnerable, then, when approached by John du Pont (Steve Carell), a millionaire wrestling enthusiast who wants to have Mark and Dave and a team of their choosing come and train at the facility on his family's estate, which he calls Foxcatcher. Mark readily accepts and is dismayed when he approaches Dave, who has just accepted a coaching job and does not wish to uproot his family, which consists of his wife Nancy (Sienna Miller) and their two children. So Mark moves to the du Pont estate on his own and begins training, forming a friendship with his eccentric benefactor who has bestowed upon himself the nicknames "Eagle" and "Golden Eagle," hosts shooting parties on the estate for members of the local police force, and regularly purchases military grade weapons (including a tank, which he grumpily sends back when it arrives without a machine gun mounted to the front) from the army. While Mark has long been in the shadow of his brother, at Foxcatcher he becomes the center of attention, with du Pont lavishing him with money, praise, and eventually drugs - but his attentions come with a psychological price.

When Mark momentarily falls out of du Pont's favor, the benefactor offers Dave as much money as it takes in order to get him to agree to join the Foxcatcher team. Dave's arrival drives a deeper wedge between the brothers, as Mark feels that his spotlight has been stolen by Dave, and causes a rift between Mark and du Pont, with the former now openly rejecting the latter even as he continues to live and train on his estate. Mark becomes increasingly withdrawn and angry, but after a poor showing in the first of three Olympic trial matches Mark allows Dave to help him and the two partially mend their relationship. However, though Dave is willing to take steps to shield Mark from what has obviously become an emotionally fraught relationship with du Pont, he isn't willing to cut ties with the man even though his presence is obviously a constant source of pain to Mark. It is only after the 1988 Olympics that Mark finds the strength to walk away, but Dave carries on in the poisoned atmosphere of Foxcatcher as du Pont becomes more unhinged, leading to the tragic event which inspired the film.

Written by Dan Futterman (who wrote the screenplay for Miller's breakthrough film Capote) and E. Max Frye, Foxcatcher is a film built on a solid understanding of who its trio of main characters are and how they work together and against each other. As envisioned by the film, Mark is a man who, no matter how good he is, always feels like he's coming up just short of the bar set by his older brother. He both relies on Dave and deeply resents him, and the inarticulate sensitivity hiding inside of his hulking frame makes him susceptible to the overtures of du Pont who, though strange, feeds Mark's ego and for a time provides him with the kind of support he's never had before. John du Pont, meanwhile, is depicted as someone who identifies with Mark at least partially because he himself has always lived in the shadow of his family, particularly his mother (played by Vanessa Redgrave), whose equestrian trophies and medals fill the family trophy room. He wants to be a champion but can only buy his victories, whether by funding the Team USA wrestling program, or by funding an over 50 wrestling competition for himself to participate in and then paying off his competitors to give him the win. He's a sad man who wants to delude himself into believing that he's a "great" man and he's humored by those around him because of his wealth, treated as a harmless weirdo right up until the moment when he shows how dangerous he's capable of being. By comparison, Dave seems like an ordinary, normal man, and for the most part he is. He loves his wife and their children, and he loves his brother, whom he can tell is in trouble... and yet he doesn't extract his brother from the troubling situation, but instead takes steps which ensure that the emotional turmoil between Dave and du Pont can only be heightened.

In the three roles Ruffalo, Tatum, and Carell all turn in great performances, with Tatum arguably having the most difficult role as Mark's moods and psychological state are expressed not through words, but wholly through body language. The more the film unfolds, the more inward Tatum's performance must become and his performance proves to be highly effective. Meanwhile Carell, who has the "showiest" of the three roles, brings some surprising subtlety to du Pont that makes him more than a mere caricature. The performances are the film's greatest asset, carrying Foxcatcher even when the narrative lapses into a sort of shapelessness that one might blame on the untidiness of how real life unfolds were it not for the fact that Foxcatcher does a lot of bending to the "true" aspect of its true story. As a character study, I think that Foxcatcher does a pretty good job (though I'm not sure that the homoerotic subtext really added much, at least not in the way that Miller handles it here), but as a story it doesn't always quite cohere. Still, Foxcatcher is a generally solid film with three compelling performances at its core which make it more than worth the price of admission.
Posted by Norma Desmond at 8:00 AM