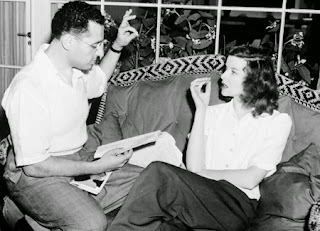 In some ways, you might say that director George Cukor made Katharine Hepburn a movie star. There's an old anecdote regarding a screen test that Hepburn did for what would become her screen debut: when viewing the bulk of the test, neither producer David O. Selznick nor director George Cukor were particularly impressed. Selznick, in fact, hated Hepburn completely, while Cukor disliked the mannered style of her acting but saw something in her when she did something simple and unscripted that made him believe that she was something special and shouldn't be dismissed. Cukor was, of course, spot on, judging by Hepburn's 60 year screen career, her unmatched 4 Oscar wins, and the fact that she is second only to Meryl Streep in nominations. Together Cukor and Hepburn would make 8 feature films and 2 television films together (for the purposes of this, I'm only looking at the feature films), forming one of the all-time great director-actor relationships. 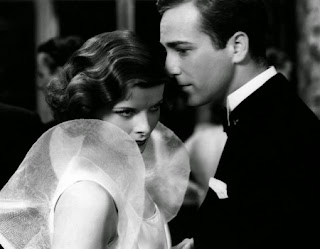 A Bill of Divorcement (1932)
This was Hepburn's first film, but you wouldn't know it from the confident way that she carries herself. Playing a young woman who, on the verge of securing her happiness, learns that she may have inherited the mental illness which has plagued her father, Hepburn delivers a performance of tenderness and strength. The "Hepburn persona" that would come to define her image in popular culture isn't solidified yet (or would one expect it to be in a first film, even during the studio system era when screen personas were so carefully crafted and nurtured), but some elements of it (particularly that distinctive cadence of hers) are present here, albeit in a slightly softened form compared to how they would appear later on. Hepburn has that effortless star quality and, more than that, she's got the talent to back it up which is evident in the scenes where she holds her own with screen legend John Barrymore. Cukor had to fight Selznick to cast Hepburn in the film and his confidence in her (and in his ability to shape her performance) pays off hugely. 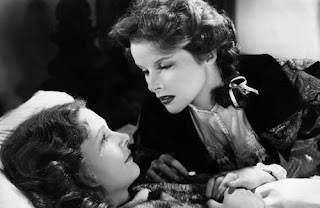 Little Women (1933)
Jo March is a character who fits Hepburn like a glove. Hell, you could even say that Jo March was Katharine Hepburn well before Katharine Hepburn ever came along. Going into this film, Hepburn was just coming off of her first Best Actress win (for the film Morning Glory), but she's hardly resting on laurels here. Cukor's relaxed style of direction gives the actors plenty of room to simply explore the nuances of the relationships between their characters and tap into genuine human emotion, and Hepburn in particular stands out as the spirited Jo. She brings fire to the role and Cukor's solid but unforced direction stokes the flames. The result is a character defining performance which stands the test of time even against the depictions of the character in 4 other adaptations of Louisa May Alcott's novel (2 of which preceded this one, 2 of which came later). 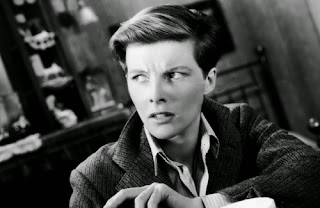 Sylvia Scarlett (1935)
From great highs, Cukor and Hepburn unfortunately went to a great low with Sylvia Scarlett, a film which was received so badly at screenings that both the director and actress attempted to have it shelved. Yet, while the film was considered a disaster in 1935, from the vantage point of 2014 it seems like that reception must have had more to do with the film's ahead of its time sexual politics than with anything else. To be sure, of all the films that Cukor and Hepburn made together (not to mention the films that Hepburn and Cary Grant made together), this is the least of them, but it's an interesting film nevertheless. Hepburn plays against type (and not entirely successfully) as a character who is meant to be a bit rough, and the film is daring (for its time) for its sexual undertones even though Cukor never quite gets a handle on the tone. Both director and star try to stretch themselves a bit with this film and it doesn't quite work, but Sylvia Scarlett certainly isn't the abject failure it has a reputation for being. 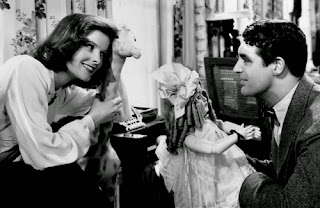 Holiday (1938)
Cukor and Hepburn's next film would be better received by critics, but would suffer essentially the same fate at the box office as Sylvia Scarlett and Hepburn's other film from 1938 (which also happened to co-star Cary Grant) Bringing Up Baby. The public had turned on Hepburn by this point and, apparently regardless of the actual quality of the films, had decided not to give her pictures a chance, but Cukor at least was still willing to give her a shot and decided against re-teaming Grant with his The Awful Truth co-star Irene Dunne in order to do so. What he ended up with was a film which has stood the test of time as one of the great pictures of its kind. While a lot of romantic comedies are premised on the notion that opposites attract, Holiday is a different kind of film in that it tells a story of like being attracted to like. This is the story of two free spirits who fall for each other, and while the film often taps into genuine human feeling, Cukor keeps things feeling light and breezy, bringing that effortless feeling to the piece that simply allows Hepburn and Grant's chemistry (and, of course, their performances) to speak for itself. Audiences may have rejected it at the time, but Holiday more than justifies its own existence and proves that sometimes the audience is wrong. 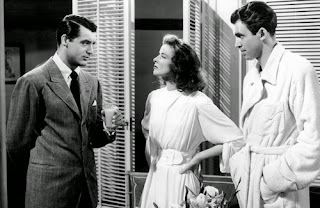 The Philadelphia Story (1940)
Of all the films that Cukor and Hepburn made together, The Philadelphia Story is arguably the most important. While Cukor's career was a bit of a mixed bag at that point, having been fired from Gone with the Wind but gone on to direct the popular The Women, and having directed the previous two entries which flopped at the box office, Hepburn's career was in such a tailspin that she was famously declared "box office poison." The Philadelphia Story changed that and was a crucial piece in the puzzle that made Hepburn one of the 20th century's most enduring stars. Having shepherded the project herself, Hepburn gained a role that was not only tailor made for her but tailor made to get audiences on her side. The character is haughty in that Hepburn-esque way that practically defines the term, but Hepburn (and Cukor from behind the camera) also ensure that she gains the audience's sympathy by getting knocked down a peg or two. It helps that the actors doing that knocking down are James Stewart and Cary Grant, who do it with just the right amount of affection that it never seems malicious, and Cukor's assured and well-honed comedic instincts ensure that Hepburn is able to maintain her dignity throughout, even when her character is falling down drunk. The result was not just a great comeback vehicle, but one of the most acclaimed comedies of its era. 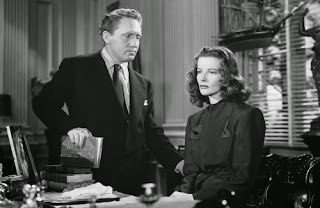 Keeper of the Flame (1942)
After the triumph of The Philadelphia Story, which Hepburn followed up with Woman of the Year, the first of her nine films with Spencer Tracy, and Cukor followed up with a trio of films with three of Hollywood's grandest dames (Joan Crawford, Greta Garbo, and Norma Shearer) to varying success, the two artists came back together for Keeper of the Flame, a political drama/romance which would reteam Hepburn with Tracy. Although Keeper of the Flame is a provocative film for its treatment of Fascism and its acknowledgment that it is not an exclusively foreign danger (that notion could seem controversial today; I can only imagine how it played in 1942), its storyline is a bit contrived and, unfortunately, Hepburn's performance sometimes falls victim to it. That said, Hepburn is nevertheless able to mine some real human emotion out of her character and Cukor, who openly expressed his dissatisfaction with the film, praised Hepburn for making the most of the role even as she struggled against its inherent artificiality. 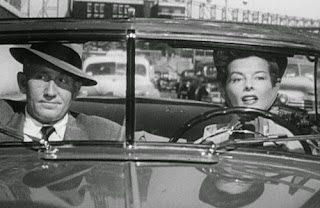 Adam's Rib (1949)
Cukor and Hepburn closed out the 1940s by teaming up once again with Spencer Tracy for another of Hepburn and Tracy's "battle of the sexes" movies. The film was specifically designed for Hepburn and Tracy by screenwriters Ruth Gordon and Garson Kanin and the roles fit them, and their on screen relationship, to perfection. Cukor brings his typically confident and deceptively light touch to the film, which gives Hepburn and Tracy plenty of room to simply do their thing, which each of them does so well that it makes the whole endeavor seem effortless. Adam's Rib was a triumph all around, one which benefited no doubt from the familiarity of all involved: Cukor, Hepburn, and Tracy all had a firmly established working relationship with each other, and Hepburn and Tracy had firmly established screen personas that audiences knew well. Adam's Rib is a comfortable film in that respect, but it's also one with a lot of vitality and fire. 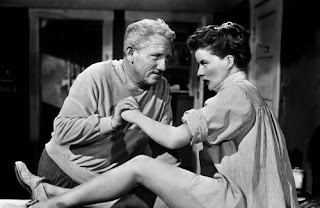 Pat and Mike (1952)
Cukor and Hepburn's final feature together would be Pat and Mike, which happens to be my favorite of the Hepburn/Tracy movies. It's a romantic comedy where the two parties are both truly equals (which was not always the case in Hepburn and Tracy's films), and it's a sports movie about a female athlete (Hepburn's eponymous Pat) who is constantly trying to balance her natural ability against what other people expect of her. Athleticism is considered a "masculine" trait, so in order to be embraced by the public Pat needs to find a way to be good without being so good that it eliminates the superficial qualities that women are so often valued for. Pat and Mike is a 60 year old film, but in certain respects it still sadly feels very modern. Hepburn is great in it and gives plenty of shading to her character (not to mention that she still has crackling chemistry with Spencer Tracy), and Cukor gets to add some broad, but nevertheless effective, sight gags to his comedy repertoire, which had already established him as the filmmaker behind some of classic Hollywood's wittiest movies.

After Pat and Mike Hepburn's career would go through several more phases which would eventually see her having the sort of career longevity that eluded many of her contemporaries, who had aged out of Hollywood's interest. Hepburn became the designated star for female roles requiring an actress over the age of 50 and amassed several Oscar nominations (and 3 wins) in the process. Cukor, meanwhile, would finally get his due by winning a Best Director Oscar for My Fair Lady (which was amazingly only his 5th nomination after some 34 years of directing). In the twilight of Cukor's career, the two would reunite for the television films Love Among the Ruins and The Corn is Green. Hepburn's career would go on for another 15 years after her final collaboration with Cukor, and though she had a great many highs during her long career, there's something enduring and special about her many collaborations with Cukor. To paraphrase The Philadelphia Story, this collaboration was yar.
Posted by Norma Desmond at 8:00 AM