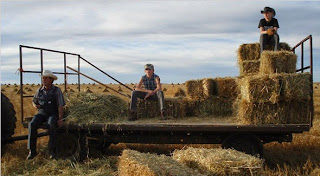 Carlos Reygadas’ Silent Light begins with a long, exquisite shot of the dawn breaking its way through the night’s sky, a shot which will be repeated in reverse at the close of the film, and one which sets the tone for the story that comes in between. This is a slow film, it requires patience, but it is so engrossing, so beautiful, and so achingly human that the reward is worth the investment. A story of romantic complications, religious and moral obligations, and forgiveness set in a Mennonite community in Mexico, Silent Light is a quiet but potent masterpiece.

The central character in Silent Light is Johan (Cornelio Wall), who is married to Esther (Miriam Toews), with whom he has six children, but is in love with a woman named Marianne (Maria Pankratz), whom he considers his soul mate. Though he is stoic and perhaps even unreadable when he’s around others, he weeps when he’s alone, deeply conflicted over what he’s doing and knowing that the situation is untenable but lacking the will to bring himself to end it. He has been honest with Esther about his relationship with Marianne and during the course of the film he also confides in and seeks advice from a friend and from his father. They tell him things that, deep down, he already knows but he’s weak and can’t help himself from pursuing his own desires, even going to Marianne and taking her to bed while two of his children wait in another room. It is Marianne who ultimately ends it, though the damage has been done and it may be beyond the point of repair as Johan has not just betrayed Esther, he has seemingly destroyed her spirit. Now he will have to contend with the consequences of his actions, though the film’s ending suggests that second chances are nevertheless still possible.

Though it contains a few overt stylistic touches, including several long, slow tracking shots, Silent Light feels more like a deeply intimate documentary than a fiction film, with the use of natural lighting and non-actors adding to the high realism of the piece. It tells a story that moves with the rhythms of its protagonist, a man who is lingering and slow to move on, and which views him with understanding more than judgment. Because of the realism with which it is filmed, which makes the viewer feel somewhat like an intruder on the private moments of the characters, it forces us to view him without judgment as well, to understand that he’s done something that has hurt his wife and threatened the foundation of his family, but that he is human and fallible. In one of the film’s best scenes, Johan confides in his father (Peter Wall, his father in real life), who grows pensive and then tells a story about a similar situation that he found himself in when he was younger. He reminds his son of his obligations to his family and reassures him that, in time, the intensity of his feelings for Marianne will abate and that he will find happiness again in his marriage. The father informs the son that he wouldn’t trade places with him, but that he envies him nevertheless – what Johan and Marianne feel for each other is rare and, in its way, wonderful even if the circumstances also make it painful and ultimately impossible.

The ironic thing about Silent Light is that it tells a story which is deeply grounded in powerful emotions like love, desire, and pain, yet follows people who, for the most part, seem to be repressing any and all emotion. When people speak to each other, they do so in tones that are calm and flat, uttering words that are to the point – this is true even of Johan and Marianne, whether they are about to have sex or as they are breaking up – yet when characters are alone they unleash their emotions in a torrent. The opening scene finds Johan left alone at the kitchen table, looking as lonely and isolated as possible as he sobs, while later on Esther will have her own private breakdown, fully giving in to the hurt and anger that she feels. These scenes, more than any other, speak volumes about how emotions are dealt with in the community, almost as if feelings are a matter of private shame – except when it comes to expressing grief over a death, at which point the members of the community gather together to weep and participate in a dirge. It’s only something as concrete as death that can elicit such intense public feeling – though how “concrete” death is is a matter of debate within the context of the film.

Though Silent Light unfolds with an intense realism, it has an ending which, at first glance, seems to undercut all that. A miracle appears to take place at the end, which seems jarring at first but is, on reflection, a strangely beautiful way to end the film. Silent Light may not appeal to a wide selection of viewers – too slow, too meditative, the setting too foreign to most viewers’ experiences – but it’s a terrific piece of work that truly resonates.
Posted by Norma Desmond at 8:00 AM