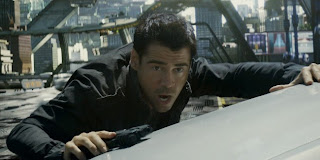 Something not being broken has never stopped Hollywood from trying to fix it, the theory being that if audiences loved something once, then they'll love it again once it's been refurbished. The problem with this theory is that it begins from an economic, rather than an artistic, place. Most movies are made in the hope that they'll make money, but when a movie is made solely for the sake of making money, it's noticeable and when that movie is a remake of a film that people really dig, they'll stay away from it. After all, why waste time and money watching a soulless, empty version of a story when you could just watch the still awesome original instead? The 2012 take on Total Recall has no reason for being aside from the hope (faint, as it turned out) that it would make some money. It has nothing to say, nothing new to offer about the story, and it's greatest "innovation" is an indulgent deployment of lens flares. All told, the 2012 Total Recall is nothing more than a waste of $125 million dollars (or upwards of $200 million, according to estimates of the production plus marketing costs).

Set sometime in the not too distant future, after chemical warfare has rendered most of the planet uninhabitable save for Great Britain (now known as the United Federation of Britain) and Australia (now known as the Colony), Total Recall is about Douglas Quaid (Colin Farrell), who lives in the Colony with his wife, Lori (Kate Beckinsale) and is plagued by strange dreams in which a woman (Jessica Biel) features prominently. Every day he travels to the UFB via "the Fall," a gravity lift that runs through the Earth's core, to work in a factory where he builds the robots which act as society's police force. Disheartened by the drudgery of his life and the lack of upward mobility offered by his position, he's intrigued by advertisements for Rekall, a company which claims it can implant artificial memories that will make a person believe that he or she has experienced something which might otherwise be impossible. Though his friend, Harry (Bokeem Woodbine), tries to warn him away from the Rekall process, Quaid's curiosity gets the best of him and he goes to Rekall and asks to be implanted with the memories of a secret agent. Not long after he's strapped into the chair, however, the police burst in and, acting on instinct, Quaid takes out several officers before escaping and making it back home, where his status as a wanted fugitive prompts Lori to try to kill him and to reveal that he isn't Douglas Quaid at all, but a member of the Resistance led by Matthias (Bill Nighy).

Once again Quaid escapes and his path intersects with that of Melina, the woman from his dreams, who helps him get to an apartment in the UFB where he watches a recording of himself and learns that he's actually Carl Hauser, a former agent of the UFB who defected to the Resistance. Pursued by Lori, who was an undercover UFB agent assigned to keep tabs on him and who is determined to kill him despite being given orders by Chancellor Cohaagen (Bryan Cranston) to bring him in alive, Quaid and Melina set out to find Matthias so that they can prevent Cohaagen's planned invasion of the Colony and genocide of those who live there. When they get to Mattias, traveling through the wasteland left behind by the war in order to reach his hideout, Quaid and Melina discover that it's all been a trap, that the "kill code" Quaid believes to be hidden somewhere in his memory and which could disable the robots was a red herring and that Hauser had been working for Cohaagen all along. With the Resistance crippled after Cohaagen and his forces storm Matthias' hideout, and a robot army waiting at the Fall to be deployed to the Colony, Quaid must prevent Cohaagen from turning him back into Hauser so that he and Melina can save the Colony.

One of the biggest problems with Total Recall is that it has no discernible sense of identity, which results largely from its uneasy relationship with its status as a remake. It diverges enough from the first film to prevent it from seeming completely derivative (none of it, for example, takes place on Mars), but also keeps winking at the audience in order to capitalize on their nostalgia for the original (for example, though none of it takes place on Mars, there is mention of a trip to Mars, and despite all the other changes, this film manages to have a scene with a three-breasted hooker). It wants at once to be its own thing while also relying on the audience's familiarity with the broad aspects of the story that's already been told in order to fill in narrative blanks while it jumps from one action set piece to another. This hardly seems worth it as those action pieces, while unfolding in competent enough fashion, are not particularly special or memorable, and the emphasis on action comes at the expense of story and characterization. When you spend $125 million on a project you want to be able to see the money on screen, but that's a waste if there's no effort left over to make those money sequences mean anything. Unlike the original, this Total Recall is entirely lacking in wit and does nothing to make the characters seem like actual human beings. Farrell is a better actor than Arnold Schwarzenegger, but that doesn't matter if the character he's playing has exactly one note (the three principals can be described as follows: Quaid is "confused," Melina is "concerned," Lori is "angry," no more, no less, no nuance).

In many ways, the 2012 Total Recall falls into the same trap as so many failed remakes. It assumes that the success of the original was due to assembly line genre parts rather than how those parts were fitted together to make the finished product seem unique and stand apart from the rest. Remakes do not automatically have to be terrible. John Huston's The Maltese Falcon was the third version of that particular story, the Coen brothers remade True Grit to critical acclaim and several Oscar nominations, and Martin Scorsese finally won as Best Director for The Departed, an American-set reimagining of Infernal Affairs. The difference between those films and this one is that they had directors who can be called visionary, who bring their own sensibility and new ideas to a familiar story and make it seem fresh and exciting, while the director of Total Recall is Len Wiseman, who has nothing to add except the aforementioned lens flares which appear with such frequency that they make the movie damn near unwatchable, and the casting of Beckinsale as a character who is both seemingly unkillable and too dumb to live. Lori is, seriously, the worst government agent ever. The moment Quaid learns that she's against him, she comes down with a raging case of Talking Killer Syndrome, spilling everything she knows to him even though she absolutely does not have to and despite the fact that keeping him in the dark would have been far more beneficial to the success of her mission. She also keeps trying to kill him even though she's been ordered not to and even after she finds out who, exactly, Quaid really is and how valuable he must therefore be to Cohaagen. If Total Recall was a better movie, you would forgive it for this silliness but because it's so lacking, all you can do is fixate on it.

The first Total Recall is a modern science fiction classic, but I actually think that a remake/reimagining could work in the right hands, particularly if it were to hew a little more closely to the Philip K. Dick story from which the original was only loosely adapted. But this take not only has nothing to add to the story, it also removes pretty much everything that gave the original value. The result is a big, expensive movie with a lot of bells and whistles and such hollowness at the center that it's greatest achievement is the fact that it doesn't collapse in on itself. It's the kind of disposable, generic product that is representative of nothing other than Hollywood's total lack of imagination.

Should It Have Been a Blockbuster?: Nah.
Posted by Norma Desmond at 8:00 AM

One thing they forgot to do when they re-made Total Recall was to make it fun! The original Arnie version was a hoot to watch. Even if the special effects look a little dated now, the whole movie was exciting and bright and colourful.

The remake is dark, not fun, and convoluted. I'm not saying that it couldn't be redone with a much darker tone AND be good, but this movie was not a worthy remake!

Exactly, there's no fun to be had anywhere in this movie. Even the quick scene with the hooker, which should be a light-hearted nod to the original, proceeds with a kind of humorless necessity.

The 1990 film was amazing for its time. A little cheesy but good film making and good story telling. The 2012 version is terrible.