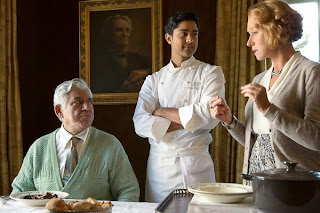 The Hundred-Foot Journey is pretty much exactly the movie you think it's going to be. It's a gentle, unchallenging, workmanlike film with low stakes but plenty of charm. That's not a criticism, incidentally; the world of cinema needs those types of films just as much as it needs the enormously ambitious productions that flood the marketplace towards the end of the year. In the grand scheme of things, The Hundred-Foot Journey is a very minor work, but it's also a refreshing film in that it does something that very few other movies do by giving voice and agency to characters who are usually relegated to the supporting ranks. The Hundred-Foot Journey isn't going to change the world and it isn't reinventing the wheel, but it's an often delightful trifle that delivers what it promises.

After fleeing Mumbai following a politically-based attack which leaves their matriarch dead and their restaurant burned to the ground, the Kadam family, consisting of Papa (Om Puri), sons Hassan (Manish Dayal), Mansur (Amit Shah), and Mukthar (Dillon Mitra), and daughters Mahira (Farzana Dua Elahe) and Aisha (Aria Pandya), wanders briefly through Europe until their van breaks down in a French village just beyond the border with Switzerland. When he spots a vacant restaurant with a "for sale" sign out front, Papa is convinced that fate has brought them there to begin their life anew, though he meets some resistance from the family and a lot of resistance from Madame Mallory (Helen Mirren), the owner of the restaurant across the lane. Scornful of what she sees as the Kadams' garish restaurant, unwanted and out of place in her little corner of the world, Madame Mallory tries to run the family off and begins a small war with Papa which finds each of them running to the Mayor (Alban Aumard) every day in order to make complaints about the code, noise, and other violations of the other's restaurant. While they're at each other's throats, Hassan, a chef who lacks formal training but makes up for it with inherent skill and instinct, develops a tentative romance with Marguerite (Charlotte Le Bon), a sous-chef in Madame Mallory's kitchen.

The antagonism between Papa and Madame Mallory cools only after the Kadams' restaurant is vandalized and firebombed and Madame Mallory realizes that she has been fostering and encouraging an atmosphere of xenophobia and racism in her kitchen. She tries to make amends in various ways, including by inviting Hassan to study in her kitchen, a not entirely altruistic gesture as she believes that Hassan is the key to her restaurant receiving its second Michelin Star. Hassan's invitation to join the kitchen causes a minor rift between him and Marguerite, as they are now in direct competition for Madame Mallory's favor, a competition which lasts only briefly as Hassan quickly emerges as belonging to a class all his own. With Hassan's new spin on traditional dishes, Madame Mallory gets her second Michelin Star but, as a result, loses Hassan as a chef when restaurants in Paris begin to beckon. While Hassan goes to the big city to make his mark, the detente between Papa and Madame Mallory softens first into friendship and then into romance. However, while all is increasingly well in the village, Hassan's whirlwind rise to the upper echelon of his profession threatens to cause him to lose himself and forget his roots.

Adapted by Steven Knight from the novel of the same name by Richard C. Morais, The Hundred-Foot Journey is a story of how people learn to overcome their cultural divisions in order to see each other as human beings. To that end, the film is unafraid to have its characters, particularly Madame Mallory, engage in some fairly ugly behavior in order to underscore how insidious the fear of difference can be and how quickly knee-jerk prejudice can explode into violence when circumstances allow it. Although Madame Mallory insists, when warned by the Mayor that she's aligning herself with a bad element in the village, that she's never been "aligned" with anyone, once she's confronted with what that bad element is capable of, she's forced to recognize the way that she's fed into that undercurrent of racially based hatred. Though The Hundred-Foot Journey isn't the deepest or most nuanced film you'll see this year, it does take this theme seriously and without reducing its characters down to caricatures. So often when films deal with narratives where race is a major issue you end up with a story wherein a white character is coming to the rescue of minority characters, or where minority characters take on a mystical quality as they help a white character realize their potential. That's not what The Hundred-Foot Journey is about. While only Papa, Hassan, and Madame Mallory are particularly well-drawn amongst the characters, they are all treated as people by the film - flawed, compelling, human. None of them is defined by his or her race, but by the qualities, both good and bad, that make them people and by their capacity for change and for growth.

The Hundred-Foot Journey is a fine film, well acted by a cast which brings touches of subtlety to a story which sometimes threatens to treat its themes just a little too bluntly. It isn't quite as light on its feet as other, similar Lasse Hallstrom films like Chocolat or Salmon Fishing in the Yemen, burdened as it is by one narrative arc too many and a pace which at times moves like molasses, but it's a film which ultimately works despite its imperfections. Movies like The Hundred-Foot Journey, when done properly, are the cinematic equivalent of comfort food, films that are unabashedly sentimental and play openly on your feelings, but in a way that isn't cynical or disingenuous. They might be manipulating you, but their hearts are in the right place as they do so and The Hundred-Foot Journey is a film that has its heart securely in the right place.
Posted by Norma Desmond at 8:00 AM