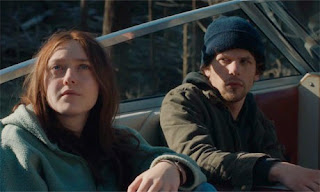 Director Kelly Reichardt is not a filmmaker who could ever be accused of making plot-driven films. Her films tend to be driven more by character and mood than by plot, and in that sense her latest, Night Moves, might be said to be the closest thing she's made to a "conventional" film. That said, Night Moves is only conventional relative to Reichardt's previous films and not when measured against just about anything else you can find at the multiplex. In other hands, this story of three environmental activists and their plot to blow up a dam would take the form of a thriller, but Reichardt's style, which favors a meditative tone rather than an urgent one, is probably too much of a slow burner to properly qualify as a "thriller." It's a character film built around a centerpiece sequence of incredible tension that will satisfy some and move too sedately for others, but if you're a viewer who has yet to experience Reichardt's work but want to, Night Moves may prove to be the perfect gateway.

Night Moves begins with the preparations for the big plot already nearing completion. Friends Josh (Jesse Eisenberg) and Dena (Dakota Fanning) do their part by buying a speedboat and then head out to Oregon where they meet up with Josh's friend, Harmon (Peter Sarsgaard), who is supposed to have everything else ready. Josh and Dena are dismayed, however, when they learn that Harmon has failed to get enough fertilizer together to make the right size explosive and worry that trying to buy enough to make up for deficit in such of short period is going to attract unwanted attention. They're correct as, when Dena is sent to make the purchase, she's met with polite suspicion by the manager of a feed factory (James Le Gros), who smells a rat but is brought around to second guessing himself when Dena is able to do some fast talking that pulls a couple of unwitting regulars at the store over to her cause. With all the necessary elements now collected, the trio head out towards the campground where they'll launch their plan and where Josh and Dena find themselves shocked once again when they find that the campground, which Harmon had told them would be deserted, is only deserted relative to how busy it is during the height of the season. Despite this new surprise, Josh and Dena opt to continue to trust Harmon and carry forward with the plan.

When night falls the trio take the speedboat, which has been loaded with the fertilizer and the mechanism which will set it off as a bomb, out to the dam, position it, start the timer, and then climb into the canoe that was attached and begin to paddle towards the shore where Harmon's truck is parked in the woods. As they begin paddling, a car pulls up to the fence just above the dam, leaving them sitting ducks should the driver so much as glance towards the water and see them and the two boats at the dam. They wait in silence, watching as the clock counts away the time they need to escape, the driver getting out of his car and examining it to try to figure out what's wrong with it. Eventually they decide to paddle quietly back to the speedboat to stop the timer and Harmon, looking down at the various wires, realizes that he has no idea how to disarm the bomb he's made, while Josh and Dena are horrified at having watched the 30 minute lead they needed get whittled down to 15 minutes. When the driver finally gets back into his car and leaves - with Harmon still staring hopelessly at the bomb - the trio paddle to shore and make a run through the woods to the truck, taking off just in time to hear the tell-tale boom of the explosion. They sigh with relief at having pulled it off, but as they try to return to their normal lives they're forced to contend with just what it means to have "pulled off" such a stunt.

As written by Reichardt and her frequent writing partner Jonathan Raymond, Night Moves is a story which is less about the big event at its center than it is about what exists around that event. It could be said that the plot has its roots in the youthful, idealistic folly of activists who have passion for their cause but who have not yet amassed the experience to advance beyond the anger of passion and towards a more level-headed and expansive view of the issue. Certainly that's where Dena, a rich kid trying to make up for her bourgeois roots by using her father's money to fund demonstrations of environmental activism, is coming from, and to a lesser extent so is Josh, whose background is never elaborated on but whose stated goal in blowing up the dam is to "make people think." That's a pretty vague and naive ambition and it's volatile in combination with where Harmon, an ex-Marine and ex-con whose take on environmentalism seems comparatively mellow but whose desire to fuck shit up is strong, is coming from. Together these three are ill-equipped to deal with the fallout from what they've done - Dena because she's never done anything of this magnitude and her guilt literally begins eating away at her in the form of a growing skin rash, Josh because he's forced to recognize that he hasn't accomplished what he thought he was trying to do, and Harmon because he wants nothing more to do with any of it now that the deed is done, he was only in it to blow something up - and the unintended consequences that arise from their project. While the film might be written off by some, sight unseen, as a work of anti-industrial, tree-hugging liberalism, it actually takes a very moderate view of environmentalism and condemns acts of extremism, characterizing those acts as being the bane of true activism. Night Moves devotes much of its attention to Josh and Dena (in its second half Harmon is nothing more than a voice on the phone, acting as Josh's anti-conscience), but the strength of the piece lies in the way that it presents their stance and then presents a dissenting view of it that comes from the same side of the issue. Josh works on a collective farm run by a husband and wife who believe that activism isn't about showing off through one-off events that make a statement, but simply by living according to your principles. When they read about the dam explosion in the paper, the husband dismisses it as "theater" that will accomplish nothing of value - taking out one dam among many isn't going to bring the system to its knees, and if the event does make people "think," as Josh wants, those thoughts probably aren't going to be in favor of the cause of environmentalism. The morning after exploding the dam, the film finds Josh lying in bed with a proud look on his face because he thinks he's done something good, but as things progress and continue to spiral out of control, he's forced to confront the fact that his act has actually harmed the cause he believes he's fighting for and will only result in further harmful acts and ruined lives.

In telling this story Reichardt focuses very tightly on the characters, using the dam explosion as a means of examining who they really are beneath the bravado and blind idealism. Dena is a young woman in completely over her head and Fanning, who appears to be following the Jodie Foster playbook in her transition from child star to adult actress, handles Dena's move from enthusiastic adventurer to guilt-ridden conspirator well, while Eisenberg and Sarsgaard have less overtly emotional (at least until the end, when Josh begins to break apart completely) and more enigmatic characters to play and do a lot with those characters even as they're kept mostly in the shadows. The only real criticism that I have of the film is that I'm not sure the ending entirely works. However, even if it doesn't, it has kept me thinking about it for several days since seeing it, trying to sort out the meaning of it all, and if the purpose of a film is to engage your brain and your imagination, then in that respect the film is an absolute success. Night Moves falls a bit short of perfection, but it's a very good movie if you have the patience for it.
Posted by Norma Desmond at 8:00 AM