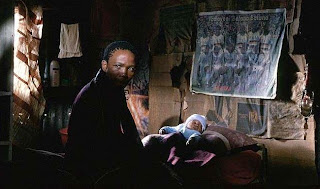 Gavin Hood’s Tsotsi is the story of a bad man who does a bad thing and somehow manages to become a better person in the process. It is not a fairy tale in which a person undergoes a miraculous change that functions to erase the misdeeds of the past, but a story in which a moment of grace and an act of redemption bring meaning to a life which might otherwise have been lost in a sea of poverty, crime and senseless violence. In Tsotsi brutality and gentleness exist side-by-side, and in between those two extremes Hood zeroes in on the humanity of a character who, at first, is so cold and distant that he hardly seems human at all. Though it is unflinching in its depiction of the uglier aspects of its protagonist’s life, Tsotsi ultimately emerges as an uplifting film that finds beauty in unexpected places.

In a Soweto sum just outside of Johannesburg, Tsotsi (Presley Chweneyagae) is the leader of a small gang consisting of Aap (Kenneth Nkosi), Butcher (Zenzo Ngqobe), and Boston (Mothusi Magano). As the film opens, the gang goes into the city where they target a man on a crowded train and proceed to rob and kill him without anyone else even seeming to notice. When Boston later becomes sick over what they’ve done, Tsotsi beats him almost to death with the same coldness and detachment with which he attacked the stranger and then sets off into the night alone. Despite the two attacks he’s already participated in, Tsotsi isn’t quite ready to call it a night, so when he finds himself in an affluent neighborhood where all the houses are surrounded by security gates and watches as one of those gates fails, forcing a woman to exit her car and use the intercom to get her husband to open the gate for her, he sees another opportunity. With the woman’s back turned, Tsotsi gets into her car and when she attempts to stop him he shoots her, leaving her wounded and screaming in the street as he takes off, not realizing until he’s some distance away that her desperation to stop him had nothing to do with the car itself and everything to do with the baby in the backseat.

Not knowing what else to do, Tsotsi takes the baby with him back to his shack and tries to care for it in his own haphazard way, substituting newspaper for diapers and finding a nursing mother and forcing her at gunpoint to breastfeed the baby. Though he knows no life other than one of crime and violence, and no means of getting what he wants and needs except through force, a change comes over Tsotsi as he cares for the baby and he finds that he wants more out of life. In less skilled hands, this might seem contrived or sentimental, but Tsotsi aims for, and becomes, something more complex. Without turning it into an excuse for his bad actions, the film makes it clear that Tsotsi has experienced a great deal of pain in his life that has left him hardened, but has not quite excised the vulnerability that rests just below his surface. Tsotsi’s eventual attachment to the baby – whom he leaves with Miriam (Terry Pheto), the woman whom he originally held at gunpoint and who later agrees to care for the baby and let Tsotsi visit whenever he wants – is not just about the baby, but about his desire to be around “goodness” in general, and specifically the maternal goodness that Miriam represents and which he was deprived of as a child. When Miriam realizes how Tsotsi came into possession of the baby and tells him that the baby needs to be returned home, Tsotsi’s reply is, “If I gave him back, could I still come here?” These are the words of someone who was forced into adulthood without having had a childhood, who longs to turn back the clock and try again so that he might set his life on a different path. Even as he asks the question, though, he already knows the answer and understands there is no turning back, there is only what lies ahead – but that doesn’t mean there can be no second chance.

The world in which Tsotsi lives (and, for that matter, the sharp division between his world in the slum and life in the gated community) is well-realized to support the film’s exploration of how difficult it can be for someone to break out of the cycle of poverty and violence. Tsotsi does not condone the crimes committed by its protagonist, but it aims to understand the context behind them, and together Hood and Chweneyagae are able to bring to light the human being behind Tsotsi’s seemingly cold and blank stare. This is a powerful film about life on the margins of society, one which resonates and which retains its power from one viewing to the next.
Posted by Norma Desmond at 8:00 AM