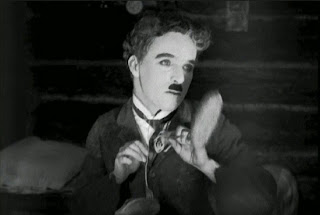 I don't know if I would call The Gold Rush Charlie Chaplin's best film (though I am going to argue that it features his best performance), but I think that it might be the film that best exemplifies Chaplin's ability to raise sentimentality to an art form. I'm not ashamed to say that as the film approached its end with The Tramp in a position of triumph and started to hint at how it might all be stripped away from him, I was actually tempted to stop the movie because I couldn't bear the thought of seeing The Tramp lose everything after all that. I should have known better, of course, since Chaplin is an unabashed master at happy endings, but it's a testament to how expertly Chaplin could play on an audience's emotions that he could potentially bring you to that point and make you feel so deeply invested in his silly little character, even if you're a cynical cinephile like me.

The Gold Rush finds The Tramp (Chaplin) in the Yukon, ostensibly to participate in the Klondike Gold Rush, though as in most of his films he's more or less just wandered into the situation instead of actively pursuing it. When a storm hits, he finds himself stranded in a cabin with Big Jim (Mack Swain), a prospector who has just hit paydirt in the form of a gold mine, and Black Larsen (Tom Murray), a fugitive who is unwelcoming when The Tramp and Big Jim invade the cabin, but is forced to accept their presence. Eventually Black Larsen, having drawn the short straw, is sent out to brave the storm and find food, and never returns. Left alone together and starving, The Tramp comes up with the idea of boiling one of his shoes so that they can eat it, a strategy which seems to satisfy him but does nothing to eliminate the hunger of Big Jim, who begins seeing a giant chicken every time he looks at The Tramp. The Tramp evades becoming a victim of cannibalism through his wits and the good luck of the storm abating, and he and Big Jim part as friends with Big Jim returning to his claim and getting into a confrontation with Black Larsen, who knocks him out and receives some prompt karmic justice in return. While the now amnesiac Big Jim wanders aimlessly, The Tramp makes his way to a newly sprung up gold rush town.

Once at the town, The Tramp ends up with a job looking after a prospector's cabin while he and his partners go out into the wild. During his time keeping the cabin, The Tramp falls in love with Georgia (Georgia Hale), a saloon girl whom he mistakenly comes to believe loves him back. About this time Big Jim comes wandering into town, having remembered enough to know that he found a mine without remembering where to find it, and recognizing The Tramp once he lays eyes on him. When they meet again The Tramp agrees to help Big Jim retrace his steps by leading him back to Black Larsen's cabin, and in return Big Jim promises to share the profit from his claim with The Tramp. As it turns out, however, finding the claim will be the easy part; the hard part will be surviving to benefit from it after another storm hits, sending the cabin sliding along ground until it comes to a precarious stop half-way over a cliff. This set up leads to one of the film's many great sequences of physical comedy, as Big Jim and The Tramp are, at first, unaware of what's happened, only coming to understand as they begin moving around the cabin and then having to think quickly in order to extricate themselves once the cabin begins sliding over the cliff.

Aside from the "wobbly" cabin bit, The Gold Rush features another of Chaplin's best known bits where he spears potatoes at the end of two forks and then dances them around as if they're legs and feet. This bit has been parodied a lot since The Gold Rush's release (one of the more famous examples is Johnny Depp's take on it in Benny and Joon) and yet, despite that and despite the fact that almost 90 years have passed since Chaplin committed it to film, it still plays as being funny because Chaplin's touch is so light and so deft. That bit, which is part of a fantasy sequence in which The Tramp imagines himself entertaining Georgia and her friends, also leads into the film's most affecting moments. Earlier in the film Georgia and her friends were having a bit of fun with The Tramp and told him that they would come over to keep him company on New Year's Eve, so he gets the cabin ready for them to come over and then waits and waits, eventually falling asleep and imagining that scene in which he utterly charms them all. When he wakes up, however, he realizes that he's been stood up and hears the revelry at the saloon down the road (where Georgia and her friends are celebrating). The despair in his face as he looks longingly out his window, knowing that he is all alone while everyone else in town is happily celebrating together - though there's some question about how "happy" everyone is, given some of the despondent faces in the saloon during the singing of "Auld Lang Syne;" plenty of people in the town are feeling as lonely as The Tramp, they just aren't lonely and outcast - is almost too much to watch. Chaplin is a performer who is legendary for his ability to make an audience laugh, but his ability to make you feel for him is even greater. Although The Tramp is one of the most recognizable characters in film history and appears in many different films, we know nothing about him - where he comes from, who he is, his actual name, etc. - and yet, because of what Chaplin brings to his characterization, we know all we need to know in order to feel invested in him. Chaplin's works endure not simply because they are so funny, but because he brings such great humanity to his character, and that has never been more apparent than it is here (though his performances in City Lights and The Kid come pretty close).

The Gold Rush is an excellent film and most certainly one of Chaplin's best. It blends comedy and drama in a way that seems effortless and it's so perfectly crafted and executed that even gags that ought to seem corny or tired by now (example: The Tramp's "compass" is just a piece of paper with N and S written at the top and bottom and W and E written at the left and right) will elicit a chuckle. The special effects involved in the two blizzard scenes, particularly in the cabin going over the cliff scene, look unsophisticated to the modern eye, but it works both because that lack of sophistication is part of the charm, and because it fits perfectly with the dreamy unreality of silent film. Silent films are not the sort where you find yourself immersed in a world that you recognize as being like your own; they are films that play like fun house mirrors versions of your own world in which everything is fantastically out of whack. So it is with The Gold Rush, a great film which remains engaging, funny, and moving even after almost nine decades and countless cinema innovations since its initial release.
Posted by Norma Desmond at 8:00 AM